Blue Templar is highlight of Punchestown for Limerick's Enda Bolger 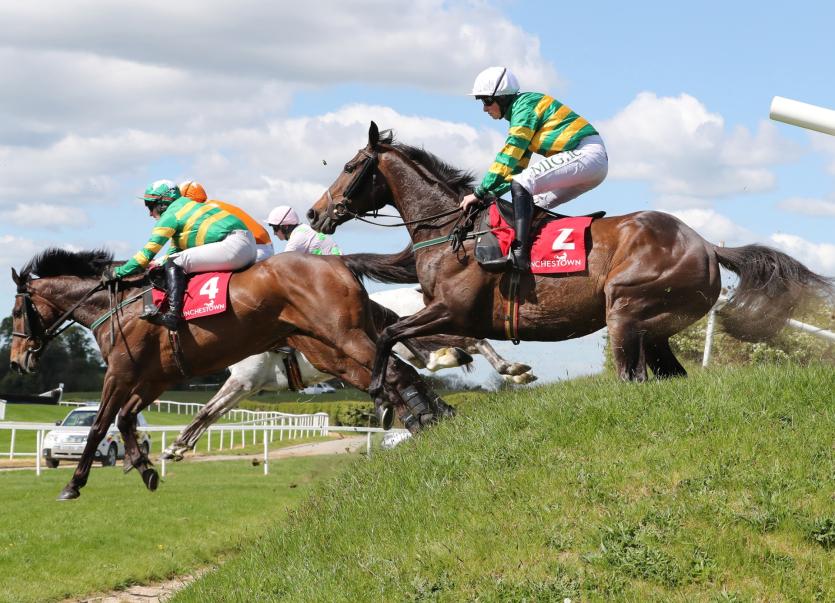 Enda Bolger revolves his whole season around the Punchestown festival and Blue Templar ensured it was a week to remember for the Bruree-based trainer by winning twice at the five-day event.  The JP McManus-owned eight-year-old won the first race of the festival, the Kildare Hunt Club Fr Sean Breen Memorial Chase for the Ladies Perpetual Cup, at odds of 11-2 under Raymond Barron and repeated the feat on Saturday in the Dooley Insurance Group Cross Country Chase under the same rider at odds of 11-4.

Ruby Walsh stunned the racing world by announcing his retirement with immediate effect after his win on Kemboy in the Punchestown Gold Cup on Wednesday, bringing the curtain down on a superb career spanning 24 years.

Walsh, 39, the second child and elder son of trainer and former champion amateur jockey Ted and his wife Helen, has been largely associated with racing powerhouses Willie Mullins and Paul Nicholls throughout his career and in the limelight for more than two decades since his first win in July 1995. He will forever be associated with legends like Hurricane Fly and Kauto Star and is widely considered as the greatest jumps jockey that ever lived.

Aidan O’Brien completed the Newmarket Guineas classic double thanks to the victories of Magna Grecia in the 2000 Guineas on Saturday, a terrific tenth victory in the race, which was ridden by the trainer's son Donnacha O'Brien, and 14/1 shot Hermosa in the 1000 Guineas on Sunday under Wayne Lordan.

In contrast to recent years when the trainers’ title was only secured in the final days of the season, Willie Mullins dominated from start to finish to win the championship for the 13th time. Paul Townend, associated with the Mullins stable for the entirety of his career to date, got the better of a protracted battle with Rachael Blackmore to become champion jockey for the second time.

The champions in six categories were presented with their awards at Punchestown racecourse on Saturday afternoon by Minister for Agriculture, Food and the Marine, Michael Creed TD.

Gigginstown House Stud are the leading owners for the fifth successive season and for the seventh time in all. They enjoyed no shortage of Grade 1 success with Delta Work (three times), Apple's Jade (three times), Road To Respect, Hardline, Battleoverdoyen and Commander Of Fleet all winning at the highest level. The famous maroon and white colours were also carried to success in the TheTote.com Galway Plate by the Gordon Elliott-trained, Mark Enright-ridden Clarcam while the Sean Flanagan-ridden Tout Est Permis won the Ladbrokes Troytown Handicap Chase for trainer Noel Meade. Gigginstown House Stud also enjoyed considerable success cross-channel, the highlight being the repeat Aintree Grand National win of Tiger Roll.

Willie Mullins dominated from the off and comfortably retains the trainers’ championship in a season that was highlighted by his first success in the BoyleSports Irish Grand National with Burrows Saint. In contrast to recent years when he only secured the title in the final days of the season, Mullins led the championship from a very early stage and never looked back after the success of Sharjah, ridden by his son Patrick, in the Guinness Galway Hurdle and the victory of the Katie O’Farrell-ridden Low Sun in the valuable Galway Shopping Centre Handicap Hurdle. Sharjah was to be Mullins’ first Grade 1 winner of the season in the Unibet Morgiana Hurdle and the same horse also triumphed in the Grade 1 Ryanair Hurdle at the Leopardstown Christmas Festival. Kemboy (twice), Min (twice), Klassical Dream (twice), Aramon, Quick Grabim, Bellshill, Voix Du Reve, Un De Sceaux, Coolreevy, Chacun Pour Soi and Benie Des Dieux were also Grade 1 winners for Mullins who saddled 207 winners in all.

Paul Townend is champion jockey for the second time.  He won the title in the 2010 /11 season with 80 winners and regains the crown with a tally of 109, a personal best.  Paul has previously finished third in the championship on three occasions.  His highest profile wins during this campaign came on Grade 1 scorers Sharjah, Un De Sceaux and Benie Des Dieux.  With six wins during the term, Camelia De Cotte was the biggest contributor to Townend's winning haul.  A terrific season was topped off by the win of Al Boum Photo in the Cheltenham Gold Cup, one of two Cheltenham Festival winners this year for the Midleton man.

In what is a remarkable achievement, Donal McInerney retains his champion conditional title. From Herbertstown, County Limerick, he rode the biggest winner of his career on his old friend Auvergnat, trained by Enda Bolger, in the Paddy Power Chase at the Leopardstown Christmas Festival in December. The same horse had provided Donal with his first career winner and was also a winner for him at Punchestown this time last year in the Friends First Cross Country Steeplechase for the La Touche Cup. Notable winners during the season also included the Mouse Morris-trained Spring Watch at Roscommon last summer, Goulane Chosen, trained by Seamus Spillane, at Limerick in March and the Eric McNamara-trained Internal Transfer at Limerick last month. Donal rode 21 winners this season.

Patrick Mullins joins Ted Walsh as an 11-time champion amateur rider as he retains the title he won back from Jamie Codd last season. Mullins bettered Walsh’s long-standing record number of winners for an amateur rider early in the season and his tally of 42 winners also included a three-length success on the Susannah Ricci-owned Sharjah in the Guinness Galway Hurdle, Ireland’s richest hurdle race. The same horse gave Patrick a 12th career Grade 1 success when taking the Ryanair Hurdle at the Leopardstown Christmas Festival. Patrick also rode two winners on Dorrells Pierji, Royal Illusion and Royal Rendezvous but the biggest contributor to his season’s haul was Masons Daughter which was the winner of a bumper at Tipperary and hurdle races at Ballinrobe and Kilbeggan.

Lisa O’Neill has enjoyed by far her best season and is the Leading Lady Amateur Rider for a second time. Her tally of 28 winners is a personal best. Lisa rode out her National Hunt claim when successful on the Gordon Elliott-trained Galvin at Limerick in July of last year. She won two races on him and was also twice a winner on the Elliott-trained Acronym and Run Wild Fred. Lisa partnered subsequent Grade 1 hurdle winner Battleoverdoyen to his bumper victory at Punchestown in November.

Horse Racing Ireland Chief Executive, Brian Kavanagh, said: “I would like to congratulate all our National Hunt champions that have been honoured at Punchestown this afternoon. Undoubtedly the highlight of the season was the repeat success of Tiger Roll in the Grand National at Aintree last month. With seven trainers and nine owners supplying fourteen winners at the Cheltenham Festival, the reputation of Irish Jumps racing and Irish-bred and produced horses was enhanced yet again. I would also like to congratulate Willie Mullins, our champion trainer, on his first success in the BoyleSports Irish Grand National at Fairyhouse and to pay tribute to Ruby Walsh who retired this week. Ruby is as fine an ambassador as our sport has ever seen, instantly recognised the world over, and one of the greatest sportsmen Ireland has ever produced. I wish Ruby, his wife Gillian and their family all the very best for the future.”