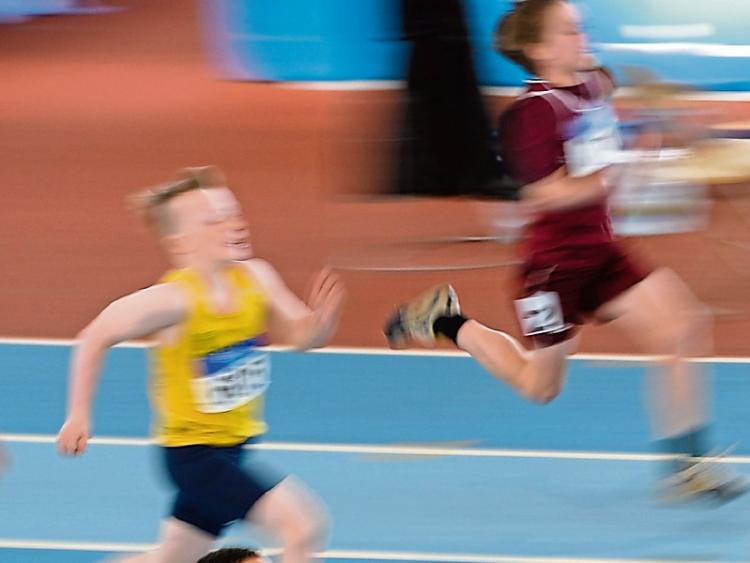 Storm Hannah wreaked havoc with sporting fixtures in the Mid-West region and athletics was no exception.

The first casualty was the 3rd and final race of the Michal Rejmer series, which will be rescheduled in due course. It was followed by cancellations of both Newcastlewest and UL Parkruns.

By Sunday the weather had abated however and a sizeable contingent of mostly young athletes travelled from Limerick to this open track event. Valuable experience was gained in advance of the upcoming County Championships.

Top performers included Dooneen’s Emer Purtill who took Gold in the U11 Turbo Javelin and Silver in the 60m. Her sister Méabh Purtill was 1st in the U12 60m. Teammate Sarah Butler took Silver in the U16 800m. Katelyn Sweeney, also Dooneen was 3rd in the U7 60m.

Rosie Hickey (Limerick AC) took Gold in the U12 600m. Llyan Cremin (West Limerick) was 2nd in the U1O Long Jump, clearing 3 metres 40. Leroy Cremin was 2nd in the U7 60m. An Brú’s Juveniles brought home Bronze medals through Alex Schmiechowski in the U7 60m and Allie O’Shea in the U8 60m. Well done to all who competed.

At the 2K Shelbourne Junior event Alan McCutcheon was first finisher in 7:43. Róisín Hussey was first female in 11:29

Alison Flynn, from Limerick followed last week’s win in Ballybunion with an excellent time of 3:32:55 in the London Marathon.

The concluding race of the Michal Rejmer run series will be rescheduled and the date announced in due course. It’s a 5-mile route with E2000 in total prize money. Entry is E15 per race on the night or E40 for all 3. For more details log on to www.michalrejmerrunseries.com