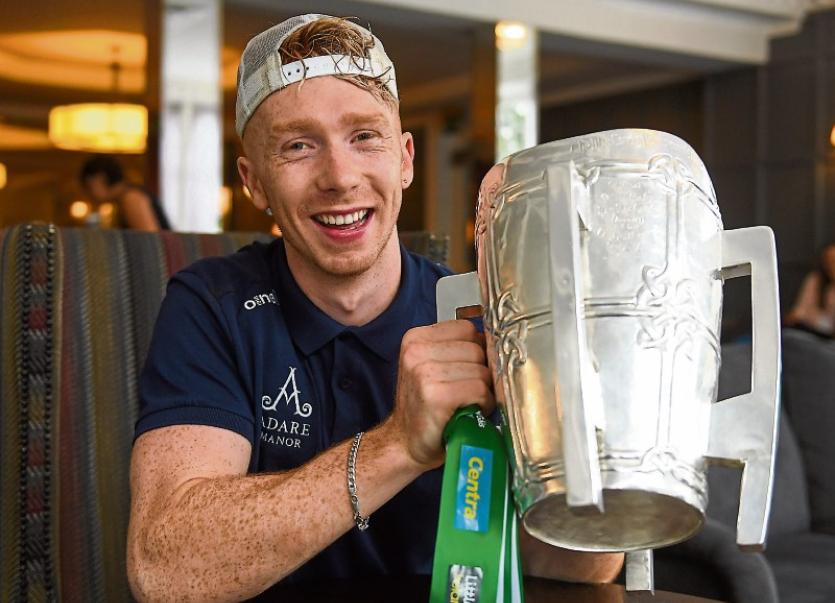 Cian Lynch, hurler of the year, has continued his form from last season

Walking out of Fitzgerald Park in Kilmallock a couple of weeks ago I was puzzled.

I had watched Patrickswell win with some comfort against Na Piarsaigh and one player stood out above all others.

Now, I didn’t have to wait for this game, for this player, to puzzle me because we saw lots of examples of it last year.

I went to the game to analyse him up close, to see him dance around other players and to try and figure out how he manages to get his hand on the ball so quickly.

I left the game not much wiser because this player gets his hand on the ball faster than a magician does his magic.

I left knowing that he is possibly one of the greatest midfielders that Limerick has ever produced and even at this early stage in his career he is well in position to becoming one of the finest midfielders of his generation.

Cian Lynch is not your standard player. He has that special ingredient that sets him apart. A player that can carve up a field with his movement and vision. To win an All Ireland title you have to have players like Lynch, players that can create, players that can change a game in a moment of magic.

Limerick lacked that quality but the contribution of Cian Lynch played a key part in our success in 2018.

Try as I did during that game with Na Piarsaigh, it was impossible to fully appreciate the work rate and skill of Lynch.

He thundered up and down the field with such ease. He had those charged with marking him in a spin. That was no reflection on them because many have tried to contain him but while they might manage it momentarily they just can’t sustain it for a full game.

His hands are fast, really fast, his hurley movement is fast, his vision is better than a hawk and the combination of all of the above make him a really class player.

In the run up to last years All-Ireland final Galway knew the difficulty in containing Cian Lynch. I can remember discussing it after the final with Galway manager Michael Donoghue.

“To me Cian Lynch is the best link player in the game, his pace and vision will test any player but his ability to win dirty ball is superb. I can assure you we planned like every other team how best to deal with Lynch but on the day he was pure magic.

“He does things others would never try and no matter how much time you spend on the training field it’s impossible to train for the array of talents he brings to the game.”

From a very early stage Cian Lynch showed signs of being a bit different. What we see him doing now, he did at underage level.

The only noticeable difference now is that he is doing faster. There was a time when soccer was a big part of his life. He played at a high level and might well have had designs on playing in the Premiership. That wasn’t to be and thankfully for Limerick such aspirations took a back seat.

When Cian Lynch entered the underage academy he showed early signs of what was to come. He was also trying to serve a few masters and soccer was still very much on the agenda.

In 2013/14 he was part of the minor team that did so well and that really was the foundation stone that saw him progress.

Joe Quaid had him at U16 level and Brian Ryan had him for his two years at minor level. Anyone that had an involvement with Cian Lynch will tell you of his attitude. He was willing to work and willing to learn.

His years with the minor team served him well as it did the rest of the players that went onto win a senior medal last year. I would say that the opportunity to play in Croke Park three times over those years had a telling impact on them.

They played with confidence and that bit of a swagger which is so important when it comes to delivering on All Ireland final day.

Another element of Cian Lynch’s play is his ability to hurl in limited space. That’s the sign of a great player. He can hurl in tight space and moreover he can shorten his hurley and still deliver the perfect pass.

I would suggest that he could hurl with an ash stick such is his natural ability. He brings all of his talents to the table, if it doesn’t come up with the hurley he can jab lift with his boot.

The combination of flicks and freestyle hurling Cian Lynch brings to the table are mind blowing. He does it without thinking. He does it so fast the cameras struggle to pick it up.

When you are at the game it is not fully possible to appreciate the speed at which he does things.

Cian Lynch could hurl in a wardrobe, he seems to be able to fold his arms across each other and still get the shot away.

Some players have to take multiple steps before they deliver, that is not the case with Lynch. He reminds me a bit of Brian Whelahan the former great Offaly player, win, step and strike almost in one motion.

For the past few weeks in particular team managers and management teams will have started to really look at how to play Limerick in this years championship.

They will be looking to find nuggets that might prove valuable in the heat of championship. Limerick are the last team into the Munster championship and of particular focus to those management teams will be how they can control the play makers in the Limerick team.

Cian Lynch will figure strongly in any such analysis. They might feel that curtailing him might be one way of unlocking the Limerick system. I wish them well on that. I think we have yet to see the best of Cian Lynch.

He manages to float around the field. Sometimes I have listened to supporters as they leave the stadium questioning where Cian Lynch was. There are times that I don’t blame them because it’s not until you watch the game back can you fully understand the impact he has on games.

One of the most pleasing aspects of last years All-Ireland win for me was the impact it had on young boys and girls.

I have written many times before that young players needed Limerick heroes to look up to.

For too long they had to look outside the county for players to look up. They might have seen Limerick players only a couple of times a year and thus they didn’t have the opportunity to model themselves on them.

I smile when I pass young players hurling in schools and training fields as they commentate and play at the same time,

“Limerick are two points down, Lynch has the ball, he has run the length of the field beating ten players on his way, he scores, he scores a brilliant goal and Limerick win in the last minute of the game.”

The joy of sport is how it allows us dream and in time we hope to see many more ‘Cian Lynchs’ in Limerick.