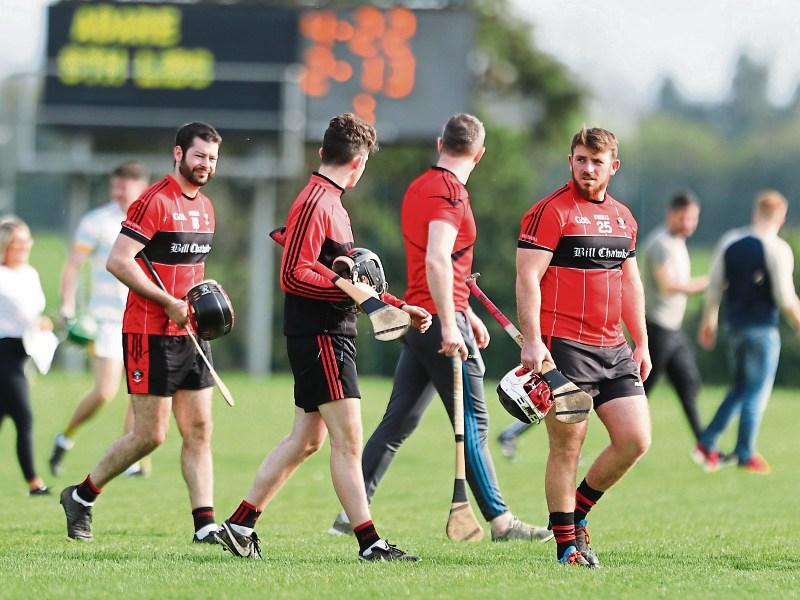 Adare players leave the field after their win over South Liberties, when will they play again though?

Game set and match. The hibernation begins for club players in the GAA and it seems those running the association think they are doing a fine job.

The top brass have failed to take notice of what really matters and in time they will see just how much damage will be done to the grassroots of this great organisation.

The GAA was founded with the club and parish at its core. That is no longer the case. The base that was once so strong has eroded badly in recent years and in the near future many parishes will not have a GAA club.

Turning your back on the club player is unforgivable. To allow a situation whereby no championship games will take place in most cases until late August or September is a recipe for serious long term damage.

The bond between player and club was very special, the pride of wearing the club colours meant a great deal. Sadly in most cases the colours many of them wear now is that of a club in America.

It’s hard to blame many young players for traveling as a great deal of them can earn money while playing in the States. The club is the bedrock of the GAA but one could be forgiven for thinking that is no longer the case in Croke Park.

The GAA are in danger of loosing its greatest asset. The club is the cradle that sets the culture that lasts a lifetime.

How any organisations can stand by and allow non active club players in championship during summer time is mind boggling.

The greatest influence in the GAA is money and those leading the charge in Croke Park are consumed by the numbers they can get through the gates at inter county games.

Sponsorship and media rights are setting the agenda for the GAA now. They have lost touch with what matters most.

Now, they will produce facts and quotes to show just how much they are doing but when you brush all of that flowery stuff aside the most important fact is that the GAA club as we know it in rural Ireland is dying a slow death.

Indeed in some cases it’s on life support but we don’t hear too much from Croke Park about that.

The club players have been given a fair bit of lip service in recent times. The body representing them the CPA have tried their best to get Croke Park to see the light but they also have been disrespected.

They were promised by Croke Park that a fixtures group would be formed but again more lip service.

Hurling and football are best played in summer, the speed of the ball, the skill of the player are seen at their best but that is no longer the case.

They play one maybe two rounds of the championship in April and the next round will be in later August or September when ground conditions can be very different.

Players are the greatest asset to the GAA, they bring energy, hope and possibility but unfortunately they are treated with disdain by the organisation that prides its self on what it does for community.

The GAA is a very special organisation, it’s the one part of rural Ireland that has up to now stayed constant.

I have said before that the GAA was never really thanked by government for the role it played particularly in hard times in Ireland.

We have a very different Ireland now. An Ireland that once again sees rural life as we know it under extraordinary pressure to survive.

In many cases the shop is gone, the post office is gone, the creamery is gone and sadly for many the GAA club is just about hanging on.

Dublin has a dominant role in Ireland and Dublin is also the place with the greatest numbers playing GAA.

Some of the clubs in Dublin have turnover bigger than some county boards. The level of grant aid going from Croke Park to Dublin is incredible.

As if the pot needed more while a huge number of clubs down the country are struggling to stay in existence.

It’s made all the harder when players have no championship games in the summer. The importance of the club in their lives is weakened, it provides an opportunity to further weaken the links between the player and the club.

We are heading towards a situation where it will take multiple clubs to make up a team. I can foresee a time in Limerick where there will be about 4/5 teams in the each division. That might take a few years to happen but it will come to that unless Croke Park and County Boards find ways to keep rural clubs alive.

I said on many occasions in the past, that in Limerick junior players should have the opportunity to play with the nearest senior club.

Of course only the better players will have that opportunity but if you allow this happen it will help the senior club that is struggling and also help the players develop and thus be of greater assistance to his home club.

Limerick County Board have the power to make that happen. In all honesty we only have five teams good enough to play senior. The Intermediate championship should be gotten rid of.

Will the Limerick County Board wait until it’s too late or will they show leadership and protect the future?

I wrote last week how impressed I was with Patrickswell and last Sunday they backed it up with a well deserved win over hot favourites Na Piarsaigh.

This was a wake up call for Na Piarsaigh who failed to match Patrickswell for hunger and attitude.

I said last week that Patrickswell had a stability about them and we got a greater insight into it in this game. Right now they have the best half backline in the county and indeed the defence as a unit were outstanding.

They should have won the game by a bigger margin but they will have to be very happy with how they have turned up so far.

Na Piarsaigh were well off the pace and they have ground to make up but they have the ability to recover.

Patrickswell had many fine performances but Mark Carmody was superb again.

He used all his experience and did the simple things very well. Kevin O’Brien sliced through for goals and more of that from him will make Patrickswell very hard to beat.

Doon recovered well to finish level with Kilmallock. Short some first choice players they managed to dig out a big performance here. Darragh O’Donovan drove them on from midfield and they might still have a big say in the championship.

Kilmallock had enough possession to win the game but again we saw a bit of over elaboration on the ball.

The championship has the ingredients of great games when it resumes but it’s hard for teams to find momentum with such a long break.

It will be altogether a different championship when it resumes and those on form now might well have lost it when it really matters.