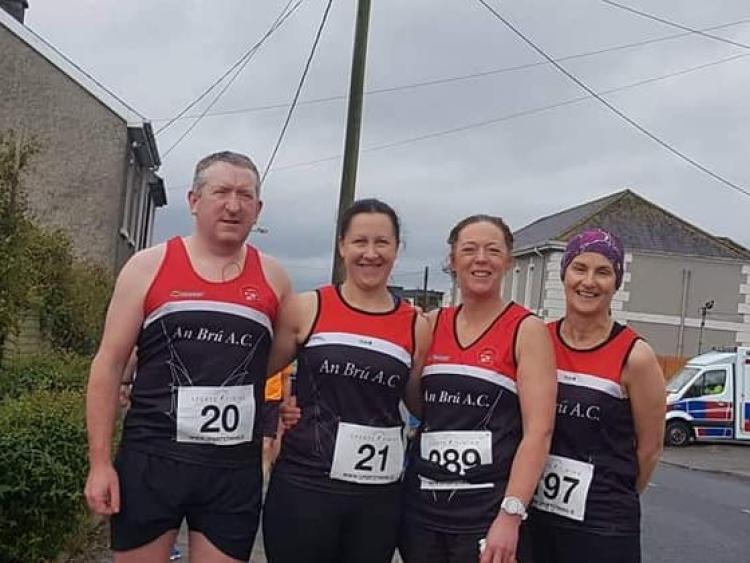 There was a strong turnout for this popular event, which featured a significant windchill on this occasion.

In the women’s event Noreen O’Sullivan (unattached) followed up last week’s victory in Lahinch with another here. She was first woman home in a time of 33:49,2nd was Michelle O’Mahony in 34:24, while West Limerick’s Caroline Conroy continued her good form to finish 3rd in 34:33. 4th-Linda Lafferty35:40,5th-Sheila Clavin (West Limerick) 37:33,F40-Noreen O’Sullivan, F50-Michelle O’Mahony

Well done to all athletes, sponsors and the many volunteers who contributed to a successful event.

A large contingent from West Limerick crossed the border into North Kerry for this An Riocht organised event. Highlights included 9th place by Mark Lenihan (18:15),10th by Colm McCarthy,15th by Ian Kelly (19:14) and Catriona Lenihan was the 6th woman in 20:50.

A once significant event on the running calendar was revived after a 30-year absence. Declan Guina of West Limerick made the blustery trip to North Cork worthwhile coming 2nd in 58:13. The Limerick AC duo of Paul Noonan (1:01:46) and David Hanlon (1:02:11) were 4th and 5th respectively. Tony McMahon (Kilmallock AC) won the M60 age category in 1:10:04. In the 10K Cormac Downes (Dooneen) was the 3rd male and 4th overall in 40:03.

Ashleigh Hartigan (An Brú) ran the Paris marathon in a fine 3:25

An Endurance Running Course will be held in association with Clare Sports Partnership in Ennis on Sat.27th April. It will run from 10am to 4pm. Each coach will receive a manual and certificate on completion. The aim is to give basic knowledge/skills to the endurance coach to help in the delivery of coaching sessions to young athletes/Fit4Life groups, road runners etc. It is open to anyone over 16 from all sporting codes, not just members of Athletics Ireland.

The Michal Rejmer run series continues April 19th and concludes on Friday the 26th April. It’s a 5-mile route and all races start at 7:30pm. E2000 in overall prize money. E15 per race on the night or E40 for all 3. For more details log on to www.michalrejmerrunseries.com