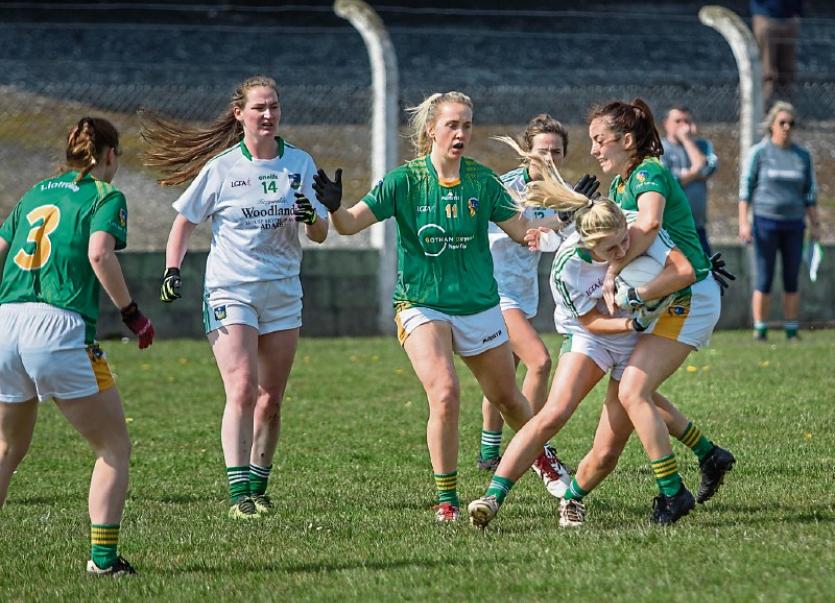 Megan O'Shea, Limerick, looks to take the ball past Karen Connolly, Leitrim, during their sides meeting in the Lidl NFL Division 4 Round 7 clash in Askeaton

A fifth league final appearance is the quest for the Limerick ladies footballers this Saturday (1pm). The 2018 All-Ireland junior championship winners face Fermanagh in Kinnegad, Co Westmeath with a Saturday May 4 final spot on offer.

The John Ryan managed Limerick won five of their seven group games to reach the knockout stages. Limerick won this title back in 2016, having lost finals in ‘15, ‘12 and 2010.

Limerick beat Fermanagh 2-8 to 1-9 back in February but the Limerick manager insists his side will be taking nothing for granted.

“They will be really tough to beat. They won the All-Ireland two years ago and while last year was not good for them, they are back strong this season,” said Ryan, who has coach Liam O’Connell and selectors; Aideen Fitzpatrick, Patrick O’Gorman and Paul Butler in his management team.

Limerick have Niamh Ryan and Roisin Ambrose back to full fitness but have centre forward Rebecca Delee as an injury doubt.

“We are nearing full strength for the first time. We have a squad of over 30 and they are all quality players but we know this is going to be a tough semi final,” said Ryan.

The group phase saw Limerick lose to Carlow and Antrim.

“We have been steadily improving. We have a lot of work done in the last few weeks and hopefully we will see that come out on the pitch on Saturday. It was really a league of two halves and you didn’t want to be flying too soon,” said Ryan.