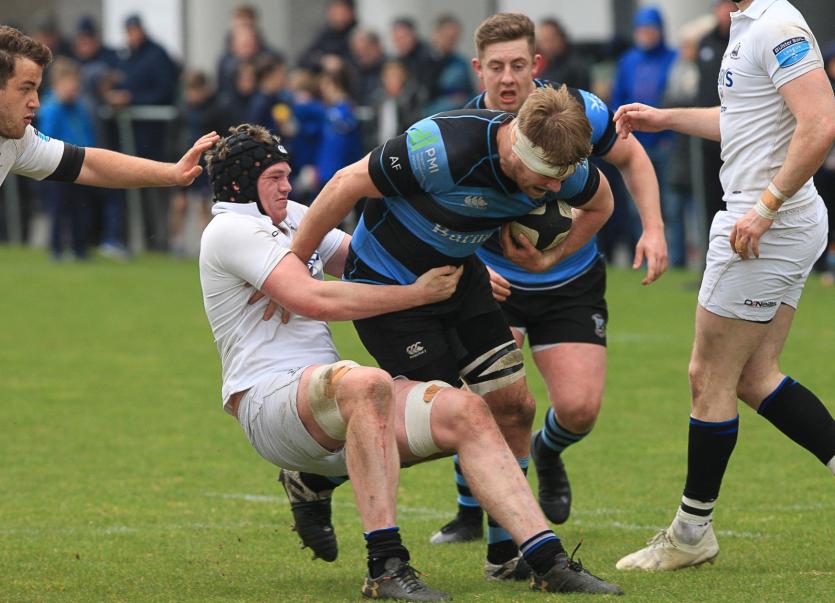 Action from Shannon's crucial All-Ireland League Division 1A clash with Cork Con at Thomond Park on Saturday. Defeat for the Limerick side saw them relegated to 1B for next season

THE final round of regular season fixtures in the All-Ireland League produced huge drama on Saturday.

In Division 1A, bottom side Shannon have been relegated back to Division 1B after just one season in the top flight. The Parish side suffered a 19-34 defeat to Division 1A table toppers Cork Constitution on the back pitch at Thomond Park to end their hopes of getting out of the drop zone.

Tom Hayes' Shannon side, backed by a stiff breeze, deservedly jumped into an early 7-0 lead when a Kelvin Brown try off a well executed maul was converted by out-half Fionn McGibney.

Con' came rolling back before half time, bagging three tries to lead 17-7 at the change of ends. When winger Eathon Moloney dotted down in the third quarter, with McGibney again converting, the home side tailed by just three points, 14-17.

It was then that the Leesiders showed their mettle and three quick tries, with winger Barry Galvin completing his hat-trick.

The Parish side did manage a third try late on through full-back Jamie McGarry. This was Shannon's eighth league defeat on the bounce, while the Limerick sides managed to pick up just seven league points in their fixtures since Christmas.

The AILs most successful club are now facing a return to Division 1B rugby for next season.

Meanwhile, also in the Division 1A relegation battle, Young Munster breathed a huge sigh of relief after retaining the top flight status, despite a 22-15 defeat away to Terenure College at Lakelands Park.

Munsters' secured a losing bonus point against the improving Dubliners to finish two points clear of the relegation play-off position which was occupied by UCC.

The Limerick side took an early lead with a Luke Fitzgerald try. However, the Dubliners, who had won four of their five fixtures prior to kick-off, rallied impressively to lead 14-5 at half-time.

WATCH: Their stay in Division 1A of the AIL might be over after just one season but @Shannon_RFC scored 3 tries in their final day defeat to Cork Con including this fine effort finished off by Eathon Moloney #LLSport @LimkLeaderSport #AIL pic.twitter.com/1iJl9TISDv

A third try from Nure winger Conor Kelly helped the home side into a sizeable 19-5 lead. Munsters' to their credit hit back and were awarded a penalty try in the 72nd minute, following a sustained period of pressure, to trail by seven, 19-12.

The home side added a penalty to stretch 10 points in front, before Munsters' secured their losing bonus point with a Shane Airey penalty.

Second-from-bottom in 1A, UCC, will now face Malone in a relegation/promotion  semi-final play-off on Saturday, April 27.

Meanwhile, in Division 2C, Bruff secured their place in the promotion play-offs after recording an impressive 26-8 win over Midleton at Kilballyowen Park.

The victory ensured Bruff finished in third place in the Division 2C table. The South Limerick side has gone through the entire AIL season unbeaten at home.

Bruff will now travel to Towns Park to take on Munster rivals Midleton once again in their promotion semi-final play-off at 2.30pm on Saturday next, April 20.

Skerries will face Malahide in their other promotion semi-final, with the winners of the two games facing off when a place in Division 2B will be at stake.

Meanwhile, Thomond have been relegated out of the All-Ireland League after finishing bottom of the Division 2C table.

The Fitzgerald Park side made it back-to-back league wins on Saturday when scoring a gritty 26-22 bonus point success away to Seapoint.

However, the win wasn't enough to save the Limerick sides as they ended the 18-game regular season one point adrift of Saturday's opponents Seapoint.

Thomond face a return to junior ranks next season after a 19-year stint as a senior club.

The Royal Blues signed off on their time in senior ranks with a gritty display at Kilboggot Park. A try late on from the hugely impressive Evan Cusack saw the Limerick side record a deserved victory over their hosts.

Elsewhere in the All-Ireland League on Saturday, in Division 1A, Garryowen lost out 22-39 away to semi-finalists Dublin University.

The Light Blues, who finished in fifth place in the Division 1A table, led 22-19 at half-time. Conan Doyle's charges, who are looking forward to a Bateman Cup final appearance next weekend against City of Armagh, had tries from Cian O'Shea, Darren Ryan and Andrew Keating, while Jamie Heuston added a penalty goal and two conversions.

Garryowen's semi-final bid petered out with a run of five defeats in their last six AIL fixtures.

Meanwhile, in Division 2A, Old Crescent went down 31-43 to QUB at Rosbrien, while UL-Bohemain suffered a heavy 41-0 defeat away to Highfield.

UL-Bohs finished in fifth place in the table, with nine wins and nine defeats in their league fixtures, ending 12 points off the promotion play-off positions.

Old Crescent, for their part, finished in sixth place following their promotion from 2B last term. Crescent picked up a try bonus point in their final outing of the regular season as Cathal Monaghan dotted down twice, while Jack O'Neill, Cathal O'Reilly and Brian Tuohy also crossed the whitewash.