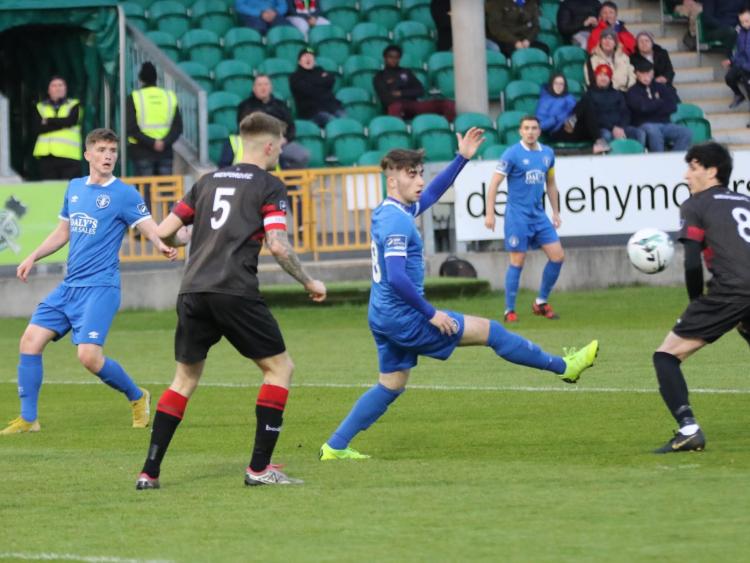 A DARREN MURPHY goal won Limerick a point in their clash with Wexford FC on Friday night, but it wouldn’t go on to be the catalyst they needed to find a winner as the game ended one-all.

Murphy struck just minutes after Emmet Nugent put Wexford ahead, but the hosts didn’t do enough on the night to merit taking all three points.

Limerick remained unchanged from the side that won away at Galway last Friday, despite injury concerns hanging over a couple of starters.

Wexford, now stylised as Wexford FC, dropping their former ‘Youths’ moniker, contested their first-ever clash with the Blues, but carried some familiar faces.

Jack Doherty, who joined Limerick in 2014, dictated things in the first half, alongside strike partner Danny Furlong who played foil for the home side countless times through the years.

That link-up was the most likely source of a goal in the first half too, as the tempo Limerick have generally deployed in their play this year was abandoned – handing the initiative to the visitors.

Doherty should have opened the scoring on the half-hour mark when he went one-on-one, but he fluffed his lines.

Shaun Kelly missed Limerick’s best chance of the opening half when a cross was knocked on from the danger zone to the back stick where the full back took a touch but fired well wide.

The writing was on the wall and Limerick didn’t heed the warnings as Wexford struck the front ten minutes into the second half.

Sean McSweeney, who was the hero in Galway, gave the ball away to Emmet Nugent and Wexford raced into the clear.

Robbie Williams had a choice – to block the pass or go to the man. He left Nugent run free and he finished at the second attempt – tapping into an empty net as he ran past Jack Brady.

However, it was the very thing that woke Limerick up as they would equalise with their very next attack through Darren Murphy.

Wexford failed to deal with a cross into the box and as the ball fell to Connor Ellis, he laid it on for the in-rushing Darren Murphy who smashed low, past Corey Chambers.

Connor Ellis found himself at the tail end of Limerick’s first decent footballing move just 15 minutes from the end, but he took a tumble as he went clean through. Instead of awarding a penalty, referee Eoghan O’Shea booked him for simulation.

He did appear to be fouled, but his attempt at convincing the official of that left a lot to be desired.

As did the remainder of Limerick’s efforts – and the game petered out, finishing in the scoreline that accurately reflected the game.