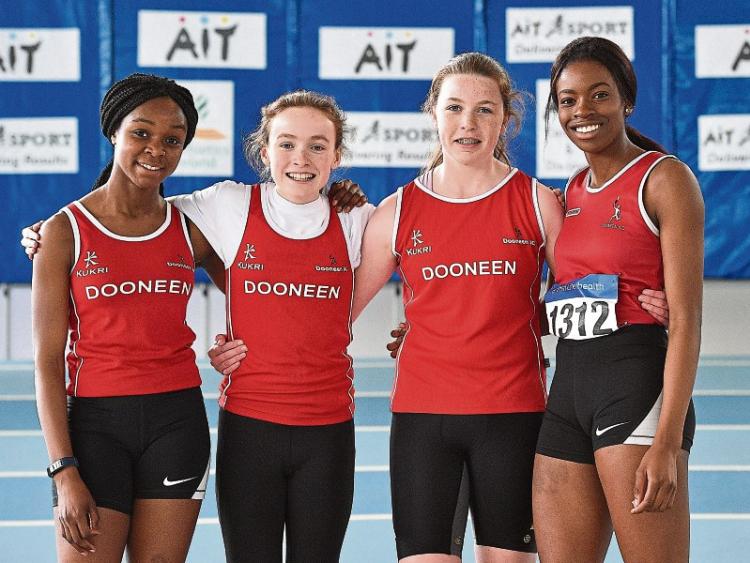 The Dooneen A.C. realy team who won the girls under-15 4x200m relay from left Debbie Lawal, Aimee Ryan, Emer Conroy and Victoria Amiadamen during Day 3 of the National Juvenile Indoors

Athlone Institute of Technology was the venue for the National Relay finals on Saturday and clubs from across Limerick were represented in heats and finals including Dooneen AC, Limerick, St Mary’s and Emerald. Dooneen AC won four gold medals, 1 silver and 1 bronze from 9 events. It was a great achievement from all the clubs to see so many teams advance to the National finals. In total, 16 teams from Limerick competed on the day.

In the U-17 race, the girls progressed from the heats to the finals coming a commendable 5th. In the U-18 contest, Dooneen girls competed but they did not advance from the heats.

The track also played host to the National throws and jumps finals and we saw two individual golds from Limerick athletes.

Shauna Ryan of Dooneen competed in the triple jump coming in 6th.

Well done also to Geoffrey Joy O’Regan of Sunhill Harriers who won the U16 boys high jump title the previous weekend. O'Regan, just 14, won the U16 title with a successful jump of 1.86m, winning ahead of Daniel Scott, of Lisburn in second and Noah McConway of St Cronan's.

Dooneen Ac had one team in the U-12 boys heats. They performed well but did not reach the final. Dooneen Ac had two teams in the U-14 heats with one team progressing to the final and winning gold in a championship best performance time of 1.42.

This race took place at the weekend and many athletes from Limerick took part including Brian Finn, Catriona Harty, Breda Hickey, Sinead Meade, Maria Browne and Noreen Kennedy of An Brú as well as Thomas Shanahan and Vincent O’Brien of Limerick AC

There will be an upcoming Endurance Running Course in Ennis Co. Clare on Sat 27th April. The course will run from 10am to approx. 4pm and costs €60. Each coach will receive a coaching manual and certificate on completion of the course.

The aim of the Endurance Running course is to give some basic knowledge/skills to the endurance coach to help assist in the delivery of coaching sessions to young athletes/Fit4Life groups/Road Runners etc. It is an introduction to some key endurance principles.

Places are limited so please book your spot early. This Endurance Running Course is open to all those 16 years or over.

It is open to people from all sporting codes and not just members of Athletics Ireland.

The annual Michal Rejmer run series takes place again around the Country Club in Caherdavin on 12th April, 19th April and 26th April. It is a 5 mile route and all races start at 7.30pm. €2,000 in prize money over the 3 weeks.

It is just €40 to enter all three races or €15 per race on the night. For more details, log on to www.michalrejmerrunseries.com . Regeneron Great Limerick Run, Sunday May 5, 2019 – the race has the option of a 6 mile, half marathon and full marathon.