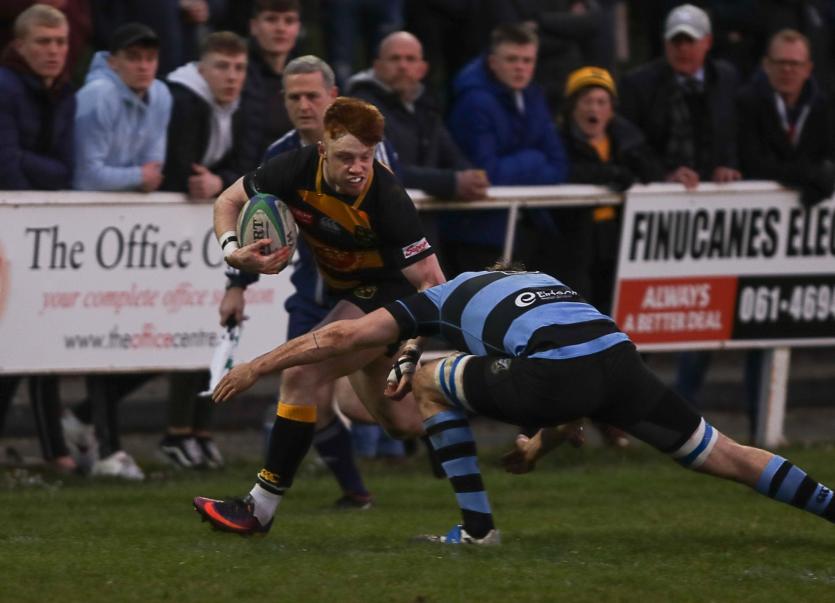 Conor Hayes in action for Young Munster against Shannon in Tom Clifford Park this evening.

The build up to this game was big, the crowd in Tom Clifford Park on Friday night was even bigger. No one in attendance ahead of this tie expected this result, but Young Munster were full value for their 33-7 bonus point win.

The win sees Young Munster's jump seven points ahead of Shannon who occupy bottom spot in the table alongside Terenure on 27. With 'Nure' playing Clontarf tomorrow and Young Munsters next weekend, it means that Shannon will now occupy either the automatic relegation spot of 10th or they could make it into 9th when they face Cork Con at Thomond Park next Saturday afternoon.

Young Munsters used their maul as a weapon once more in this game, as they have for years and Ger Slattery was the man on the end of same for his side's opening score of the game after just 13 minutes.

The score came at a time when Shannon were down to 13 men following the sin binning of Patrick Ryan and Kelvin Brown. It was to be 14-0 just 9 minutes later as Dan Walsh crossed for the first of his two tries.

Shannon rallied however and made it 14-7 just on the stroke of half time thanks to come maul pressure of their own. Nathan Randles was the man to down the ball for the five pointer as Ben Daly kicked the extras. Just before the score Young Munsters were reduced to 14 men when Ger Slattery was binned by referee Leo Colgan for an offence at the maul.

The second half, as the scoreline suggests, was all one way traffic. Try as Shannon might, the kicking from hand of Shane Airey and Stephen Kerins, turned Shannon back into their 22 on several occasions and the 'Cookies' made them pay, much to the delight of the massive home support.

Best for Young Munster on a thrilling night were Shane Airey, Dan Walsh and Luke Fitzgerald. On the losing side Tony Cusack gave an exhibition at prop which will raise even more questions as to why the player is not in the professional ranks.

All in all, it was a night for the home side to celebrate and for Shannon, a win next weekend against Cork Con is a must.