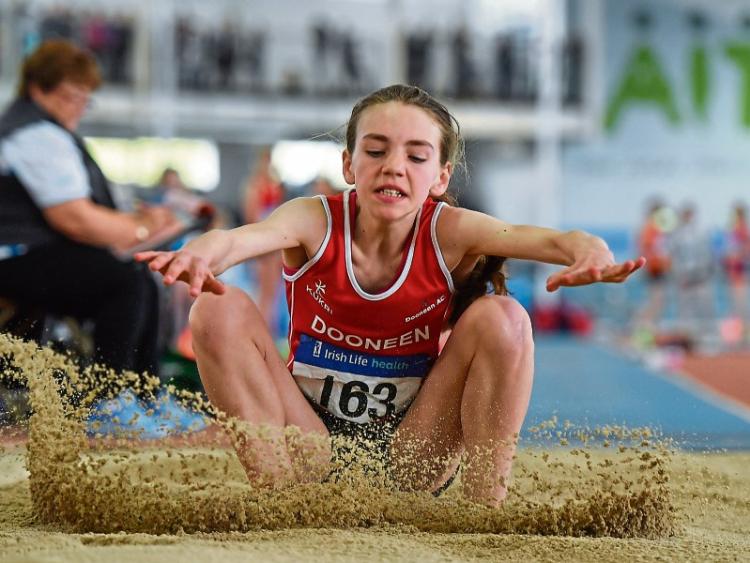 Orla O'Shaughnessy of Dooneen A.C., Co. Limerick, competing in the Girls Under 13 Long Jump event during Day 2 of the Irish Life Health National Juvenile Indoor Championships at AIT in Athlone

Athlone IT was the venue for two days of competition for athletes U-13 to U-19.

60m sprints - Vivienne Amaze and Marc O’Brien of Dooneen both reached the final of the U-13 event.

Marc O’Brien won his race and Vivienne ran well but was not in the medals. Angel Alfred also reached the U-14 final and was fifth.

Tessy and Dior Lawal of Dooneen both competed in 200m sprints. Tessy ran well in the heats while Dior was fourth in his U-18 final.

Two Limerick athletes competed in the U-13 60m hurdles final with Stuart Tobin of Limerick AC winning the title and Malachy McKenna of Emerald in 6th place. The U-14 final saw Leagh Moloney and Josh Boland of Dooneen compete. Leagh was fourth and Josh won silver. In the U-15 final, Victoria Amiadamen was fourth and Laura Frawley of St Mary’s tool silver in the U-16 final. Niamh Foley of St Mary’s won the U-18 title.

A number of athletes competed in the middle distance events including Sarah O’Halloran of Limerick AC who ran in the U-12 final. Orla O’Shaughnessy came 6th in the U-13 final. In the U-16 races, 3 Dooneen athletes qualified for the final. Sarah Butler, Sarah Hosey and Maria Campbell. Sarah Butler won bronze.

A number of athletes competed in jumps and throws events including Jayden Carmody, Leagh Moloney, Orla O’Shaughnessy and Yanna Leahy of Dooneen AC and Laura Frawley of St Mary’s. Laura won gold in the U-16 high jump and Orla won a bronze medal in the long jump.

The annual Michal Rejmer run series takes place again around the Country Club in Caherdavin on 12th April, 19th April and 26th April. It is a 5 mile route and all races start at 7.30pm. €2,000 in prize money over the 3 weeks. It is just €40 to enter all three races or €15 per race on the night. For more details, log on to www.michalrejmerrunseries.com . Regeneron Great Limerick Run, Sunday May 5, 2019 – the race has the option of a 6 mile, half marathon and full marathon