PRO14 is back on Munster Rugby’s agenda 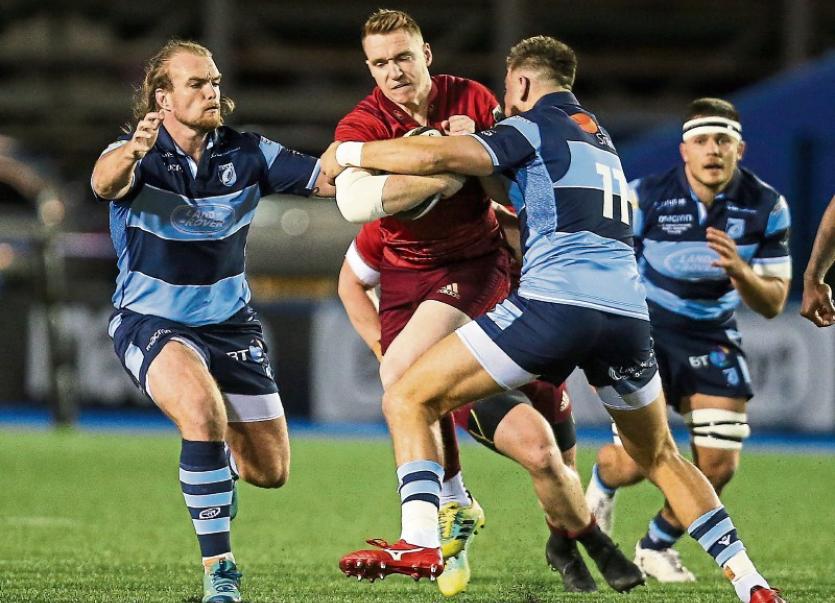 Rory Scannell of Munster is tackled by Jason Harries, left, and Kristian Dacey of Cardiff Blues when the two sides met in September

Munster, sitting in second place in Conference A of the PRO14, host Cardiff Blues in a crucial league fixture at Musgrave Park this Friday night, 7.35pm, live TG4, eirSport.

Munster have won their last twelve home games in all competitions and are unbeaten in their last nineteen at home since Leinster were victorious at Thomond Park at Christmas 2017.

However, Friday night’s opponents Cardiff have been victorious at Musgrave Park on four previous occasions in the PRO14, while no other visiting side has managed more than two wins there.

Munster winger Keith Earls, who bagged a crucial brace of tries in Saturday’s nail-biting Champions Cup quarter-final win over Edinburgh at Murrayfield, said: “We can’t allow our minds to wander ahead to the Champions Cup semi-final. In fairness this crowd have got good at focusing on it game by game as well. Saracens is a couple of weeks away, so we’re still fighting for a semi-final and quarter final of the one we’re in.

“Cardiff have their Grand Slam winners coming back with a serious amount of confidence as well and have personnel like Nick Williams who we know quite well, he’s always a tough competitor.

“They have two boys in the centre as well who caused us to struggle a couple of months ago, so yeah we’re going to have to bring our ‘A’ game and it’s the time of the season where we want to be playing in big games and important pressurised games.”

Earls says the Ireland internationals have made a smooth transition back into the Munster set-up following the conclusion of the Six Nations.

Earls said: “We fitted in quite well, we obviously had a week off after the Six Nations and coming back in last week, there was obviously a good buzz and a good hunger and learning all the different calls again.

“We’re all old enough and experienced enough that you can park the internationals, regenerate the body. Even on that week off, Johann had sent us a few plays and a few moves and the menu for the Edinburgh game, so we could look over it so we were not going in cold turkey to the calls and I think that’s where the professionalism comes into it you do that work while you’re away.

“Europe is massive and it means a lot to Munster but we take each game as it comes and we want to win every game we play. It’s no different to us whether we’re coming off internationals and into whatever competition it is.”

Earls is the only member of the Munster squad to have a Champions Cup medal. He was on the bench in the 2008 final in Cardiff. So what are his memories of Munster’s semi-final showdown with Saracens 11 years ago?

“I was at home watching it with my old man. I remember Quinny’s (Alan Quinlan) try and his celebration that sticks out in my mind, but, look two completely different teams and we’ll enter as underdogs.

“You know we will have to learn from our mistakes from a couple of years ago, but we know it’s going to be a massive challenge. I think they are the number one seeded team. We’ll give it a good belt anyway but we have to think about the next couple of weeks first before we think about Saracens.” he added.