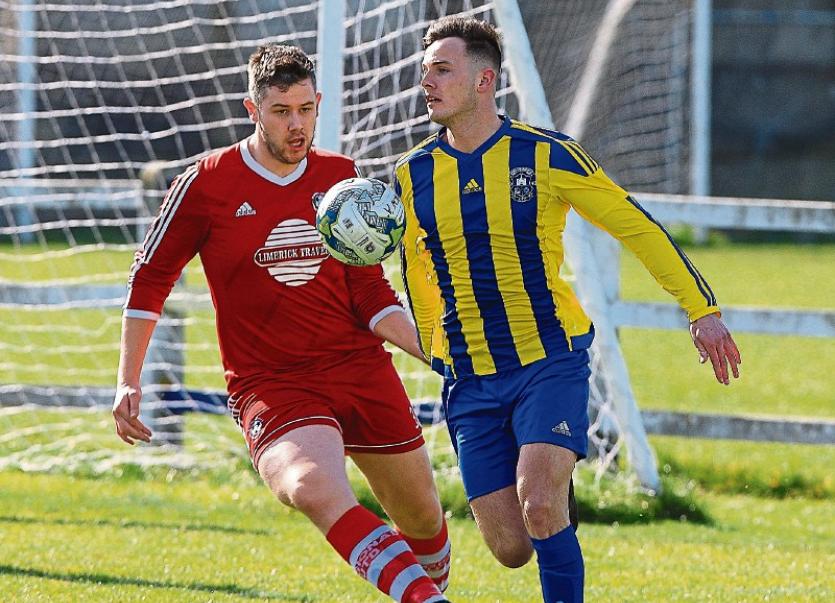 Fairview's Ross Mann controls the ball under pressure from Regional's Andy Cowpar during their Premier League meeting on Sunday morning Picture: B Gleeson

Focus this weekend is on League action with some vital games in almost all of the Divisions.

The Premier League leaders Janesboro are not in action which allows the chasing pack to close the seven point gap at the top of the table.

Second placed Pike Rovers welcome Nenagh to the Pike Club using up one of the two games in hand on the leaders.

Pike play Prospect in midweek giving them the opportunity to close the gap to just one point as the title race hurtles to an end.

Pike beat Prospect on Sunday and looked very good in a 4-0 result.

The only down side was an injury to the influential Steven McGann. It will be a nervous wait for the ‘Hoops’ as they monitor his recovery.

Nenagh have trundled through the season after losing so many players at the start of the campaign.

Whether they can dent Pike's hopes remains to be seen but you are always assured a tough game when you meet the Tipperary opposition.

The form of Colin Daly and Conor Kavanagh gives the ‘Hoops’ an advantage over most teams of late but they should treat the opposition with care.

Ballynanty Rovers will be expected to beat Carew Park on Sunday and the three points would leave them six points behind the leaders with a game less played.

With Pike yet to meet Boro, Balla will not be giving up the ghost yet.

Fairview Rangers host Prospect and Geraldines welcome Charleville while Regional Utd v Aisling should be the FAI Junior Cup semi final but until appeals are sorted we must settle for a league tie between the sides.

In Division 1A Moyross and Fairview Rgs is a must win for both sides if they have any chance of pipping the leading two.

Moyross were held by Murroe last weekend in a 2-2 draw which dented their hopes significantly.

In Division 1B Newport must take full points at home to Southend if they hope to overtake Hill Celtic in second spot.

The leading two in could in Division 2A could clinch their promotion this weekend. Hyde Rgs lead the way by two points from Star Rvs with the sides still to meet.

On Saturday Star travel to Charleville while a day later Hyde Rgs host Caledonians knowing a win will see them play in Division 1B next season.

If either slip up Patrickswell could still slip in but they must take full points from their four remaining games, starting with Kennedy Park on Sunday.

In STA Furniture Div 3A Kilmallock will be crowned champions if they beat Abbey Rvs at home. The County side have been superb and Sunday's 4-1 win over the same opposition in the cup was only the latest eye catching performance. The bulk of the side took the field in a recent Premier League game versus Janesboro and they pushed the Champions to the limit before going down.

In Division 3B, Herbertstown will be crowned champions with another win. On Sunday they are scheduled to meet Brazuca. Waiting, more in hope than expectation, for a slip up are Northside and Hyde Rgs who also meet on Sunday.

In Division 4 leaders Lisnagry will be promoted if they defeat Parkville. Second placed Fairview will also move up the Divisions if they can avoid defeat to Coonagh.

Defeat however could make things a little more difficult.

In Youth Division 1 leaders Aisling are not in action which gives Regional the chance to go joint top with a win at neighbours Mungret Reg.

Likewise in Division 2 leaders Cals are not in action. Second placed Newport welcome Caherdavin while Shelbourne visit Regional Utd B.