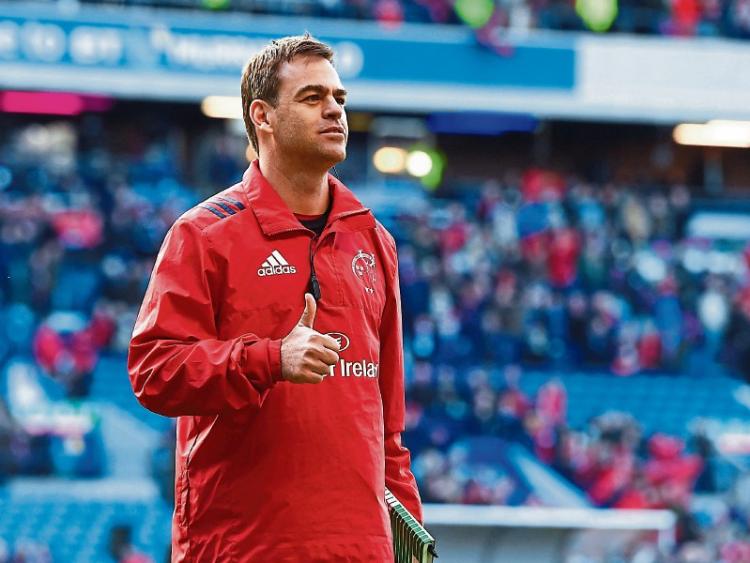 JOHANN van Graan’s reaction at full-time at Murrayfield on Saturday said it all.

It appeared as if the watching Jerry Flannery was a little taken aback at just how relieved Munster’s South African head coach was when the final whistle sounded to signal the province’s progress to another Heineken Champions Cup semi-final.

Van Graan exhaled, threw his arms into the air and soaked in that winning feeling.

The timing of a Heineken Champions Cup quarter-final so soon after the conclusion of the Six Nations Championship must frustrate the hell out of head coaches.

After all, the Munster side which took the field in Edinburgh at lunchtime on Saturday had not played together for two full months – since their final round pool game against Exeter.

The Munster players then depart the province for Ireland camp as the Six Nations takes centre stage.

Then they return from camp following the final round of Six Nations games – those who started all or most of those games for Joe Schmidt’s side get a well deserved week off – before coming straight back into the starting team for a make-or-break European Cup quarter-final.

No wonder centre Chris Farrell admitted that it is difficult to be fully up to speed with calls and plays at Munster so soon after being involved in the Ireland camp.

The Champions Cup is the competition that the Munster public have built their love of the team on.

So many save their hard earned cash to travel for away fixtures season after season.

For the players and coaches of the team, the stakes are even higher. The life would have been sucked out of Munster’s season if van Graan's side had failed to beat Edinburgh on Saturday.

Over the years we have seen how difficult it is for Munster to rebuild their Guinness PRO14 campaign so quickly after a European Cup exit.

It is exceptionally difficult.

Remember last season, following their Champions Cup exit at the semi-final stage to Racing 92 in Bordeaux, Munster did not take up its full allocation of match tickets for their glamour Guinness Pro14 semi-final showdown with arch rivals Leinster at the RDS Arena.

Munster were entitled to take up 25% of each ticket category for the semi-final showdown with Leinster. Munster’s allocation for the game was of the order of 4,750.

There was north of 20,000 Munster fans in Murrayfield on Saturday. The Champions Cup is where its at for supporters.

And Johann van Graan, his backroom team and players appreciated that on Saturday afternoon.

Edinburgh provided a huge test of Munster’s Champions Cup mettle, but an even greater test awaits for the province later this month in the form of an away date with 2016 and 2017 Cup winners Saracens.

This will be Munster’s 14th Champions Cup semi-final appearance. After two years of failing to getting out of their pool, Munster also reached the semi-final stage in both 2017 and 2018, losing to Sarries at the Aviva Stadium two years ago.

Munster haven’t won a trophy since the 2011 Celtic Cup. Stark.