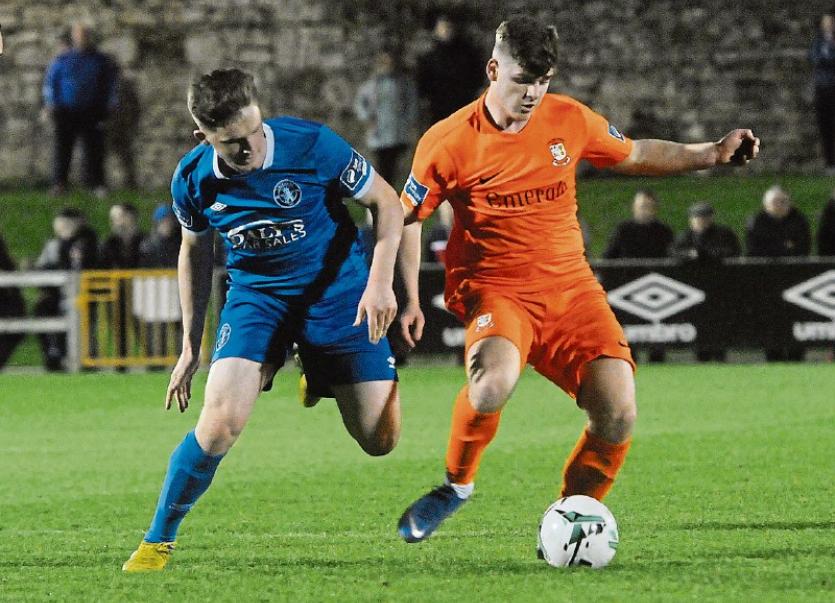 IN-FORM Limerick FC will look to make it four league wins on the spin in the SSE Airtricity League First Division when tackling Galway Utd at Eamonn Deacy Park this Friday night, 7.45pm.

Tommy Barrett’s Limerick side sit in third place in the First Division table, one point behind pacesetters, Bray Wanderers, after a run of three successive league wins.

The Blues scored a 2-0 win over Athlone Town in their most recent league game at the Markets Field on Friday night.

Limerick’s next two games in the First Division are against sides propping up the table, with Friday’s trip to Galway followed by a home fixture against basement side Wexford FC.

Limerick FC striker Connor Ellis has now scored in the Blues three most recent league outings, including the all-important second goal in the win over Athlone.

Twenty one-year-old Ellis said: “There’s no team we’ve played so far that I think would definitely finish above us. There’s nobody I fear anyway.

“It is difficult not to get carried away I suppose. We have our ambitions, but if you’ve seen the league over the last few weeks, Bray lost to Wexford and we could get carried away now and lose the next three – then we’re seventh or eighth again.”

Ellis also paid tribute to striker partner Kieran Hanlon for the impact he has had since his arrival at the club.

Ellis says Hanlon is the perfect complement to how he likes to play.

“(Red) (Kieran Hanlon) is very good. I’ll be the first to admit that the weakest side of my game is my hold-up play. I’m not your standard type of centre forward – big and strong – so when Red is on the pitch, I get a chance to express myself.”

Pat O'Sullivan said Delaney had engaged with League of Ireland club representatives and 'tirelessly worked to find a solution and model for the league to prosper.'

In a statement issued on Tuesday, Pat O'Sullivan said he felt it was appropriate at this time to 'acknowledge the contribution of Mr Delaney to the game over the past number of years'.

O’Sullivan’s statement continued: “While we have ongoing reservations on how the national league performs and our own views on how it should be structured going forward, it is a difficult situation for anyone to manage, 20 competing organisations all with different needs, issues and strategies on what's best for their club/organisation to achieve their goals.

“John has engaged with league club representatives and tirelessly worked to find a solution and a model for the league to prosper.

“We continue to support the ongoing discussions in relation to new league management structure and look forward to finding a resolution amicable to all involved.

“His election to the UEFA Executive Committee is testament to the high regard he is held within the game in Europe and while this is a great honour for John, it is also recognition of the game and out national association.

“All in Limerick FC are very grateful for John's and the FAI's support and contribution to the game in his time as CEO and fully believe he is the person to continue his work with UEFA and FIFA matters in his new role as Executive Vice President.”