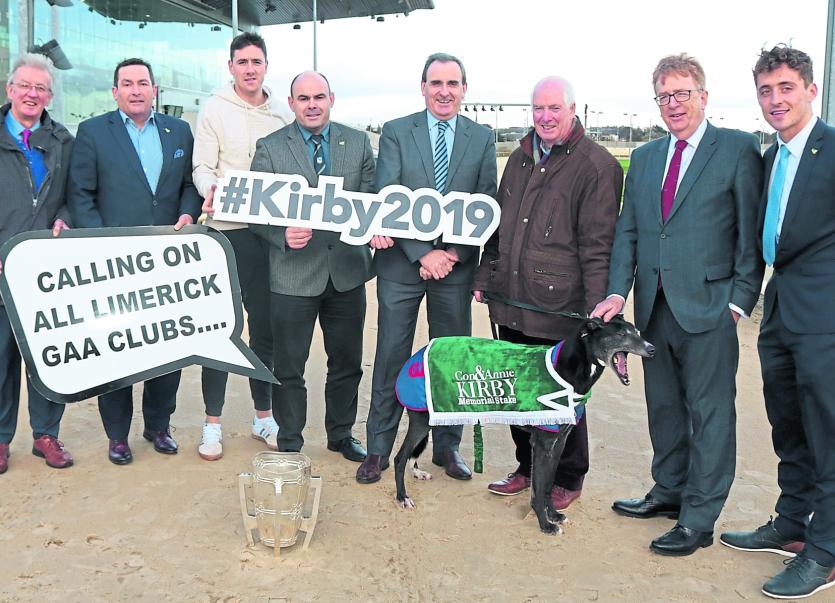 TWENTY FOUR greyhounds and therefore 24 GAA clubs remain in the hunt for Con and Annie Kirby Memorial glory ahead of this Saturday evening's quarter finals in Limerick Greyhound Stadium.

The seventh annual Con and Annie Kirby Memorial Stake is one of the world’s richest juvenile greyhound races.

Sponsored by Noreen and JP McManus in honour of her parents, Con and Annie Kirby, the competition has the biggest prize fund in Ireland after the Irish Greyhound Derby, with a total fund of €160,000. Limerick GAA clubs avail of €20,000 of this prize money, as each greyhound is assigned to a GAA club with the winner to get a nominator prize of €10,000 and a free benefit night at Limerick Greyhound Stadium.

Last Saturday, eight heats were run with the first three in each advancing to this weekend’s quarter finals.

The Liam Dowling trained Ballymac Tas - assigned to Granagh-Ballingarry GAA club - once again clocked the fastest time of the round in 28.23 in the third heat, with Toolmaker Me Dad, trained by Robert Gleeson and assigned to Ballylanders GAA, impressing in a time of 28.36 in the final race of the evening.

The 24 greyhounds eliminated in the second round will get their chance to contest the Sean O’Connor Cup this Saturday night, which is named after the late Claughaun GAA club member.

“We’re approaching our third Kirby weekend out of five now, so we’re getting down to the nitty gritty. The first two Saturdays saw some high quality, unpredictable racing here at Greenpark and we can’t see why this Saturday will be any different. What’s always been great about the Kirby, and we’re seeing it again this year, is there is huge involvement on a local level here in Limerick for owners and trainers, with a great mix from others nationwide and even the UK as well, having been inundated with entries for the competition. We’re looking forward to the quarter finals and wish all connections still involved – including the 24 assigned clubs – the very best of luck,” said Racing Support Officer with Limerick Stadium, Liam Kennedy.

Alongside the racing are a number of events to incorporate the GAA clubs – a ‘banner parade’ competition took place at the stadium last Saturday, with a ‘human race’ between club representatives to take place this weekend.