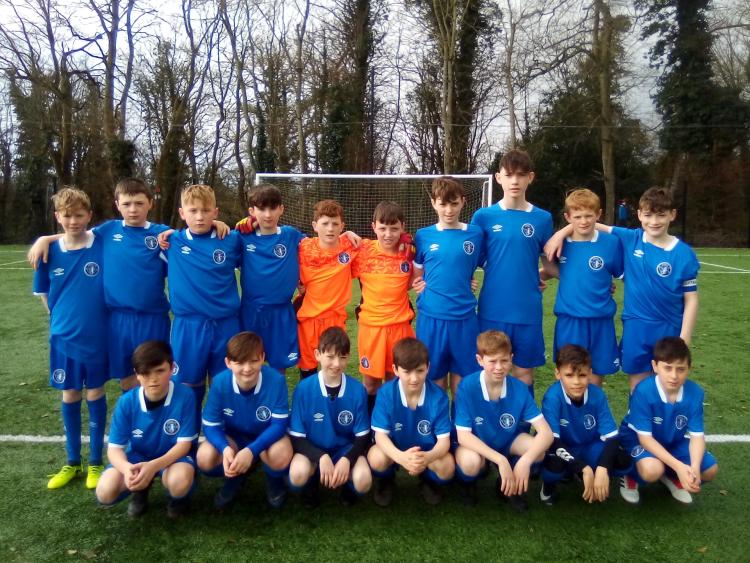 The Limerick FC U13 squad

The BluesC would control majority of play throughout the game as they were very good in possession, creating a number of goal scoring opportunities and defended really well when called upon.

Limerick FC would have a lot of the ball in the early stages without been efficient in their approach. This would all change
when Kian Kelly got his fourth goal of the season as he opened the scoring with an excellent strike from 20 yards into the top corner after initial good play.

After the goal, Limerick FC would be more commanding in their play as the Cobh Ramblers goalkeeper pulled off a number of good saves.

Limerick FC would double their lead before half time as James Kenneally reacted quickest inside the box to a rebound when Cobh Ramblers struggled to deal with the attacking threat of a Limerick FC cross.

The second half would see Limerick FC dominate throughout as the Cobh Ramblers goalkeeper would frustrate attacker Cillian Mulvihill with a number of saves, but for all his efforts Limerick FC would score four more goals.

Tom Healy and Robbie Lynch would both score headers from corner kicks while Aidan O' Shea would produce a calm finsih when running onto a Kian Kelly free kick.

Fintan McNamara finished off the scoring from yet another corner kick.

Limerick FC squad and staff would like to again thank all who attended and supported the team, while also wishing Cobh Ramblers all the best for the remainder of the season.

Next up for Limerick FC is an away trip to Kerry.