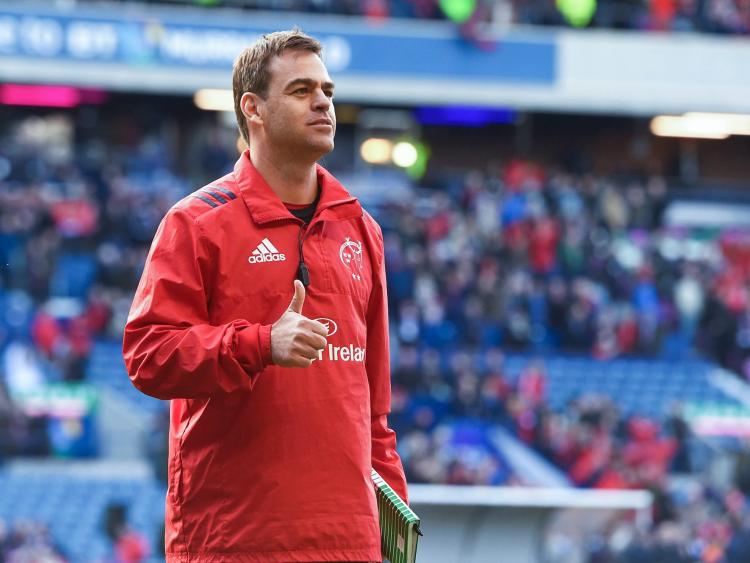 "I'm delighted, it was an incredible game of rugby between two sides who didn't know how to give up. A lot of credit to Cockers and Edinburgh, a brilliant performance from their side. They tested us literally from the first second. We as a group spoke this whole week about how this game might go until extra-time, they certainly kept going and we kept going. I'm delighted, it's our third semi-final in a row and this was a big one for us. Just look at the history of European rugby, you don't come away with away quarter-final wins. We topped our pool, we knew were coming up against a very tough, disciplined side and I'm very glad we came through it."

van Graan also had to make changes to his side before the game kicked off as Mike Haley withdrew on the morning of the game.

"We got on the bus with the news that Mike (Haley) is out, the way we train and the way we do things (it's about) nothing phases us, we just adapt. I thought we handled that well. The yellow card, losing Jack (O'Donoghue) and Joey (Carbery) in the first-half, it's a lot earlier than normal but we regrouped at half-time and changed one or two things tactically... the belief was there, congratulations to the players for pulling it through"

And what of the performance of Tyler Bleyendaal?
"That's the beauty of our squad, we've got four quality fly-halves. We made a decision to go with Tyler this weekend and once you get your opportunity you've got to use it. Especially that last conversion from the touchline, that's massive in the context of our season."

Joey Carbery was taken off after 35 minutes and there remains a doubt as to his fitness.

"Obviously, he's very disappointed. He felt a bit of stiffness after about 25 minutes and said he's going to play on. We don't foresee it being serious, but it's not for me to speculate at this stage. Ten minutes later he said he couldn't continue so I pulled him."

The performance of Keith Earls also came in for praise?

"Your experienced players, your world class players need to step up on the big days and I thought he was excellent today; as was Conor, Pete and CJ. I thought Chris Farrell had an excellent game, someone like Niall Scannell that doesn't get a lot of praise for the set-piece - that was a real battle. It was a real gritty performance from our side until the last play."

Darren Sweetnam, a late call up for the second time this season, was a star in both defence and attack.

"Incredible. When I went to him this morning I said 'listen Sweets, the same thing happened in Exeter' except this time he had more time to deal with it, that was in the warm-up. He had a bit of time to prepare himself. He's a guy, like the other 53 or 54 players we have, who just want the opportunity to play. Today it presented itself and he just played a fantastic 80 minutes. Next man in, you just have to step up."

What is it about Munster?

"Firstly, off the field I think it is the people.  If you were inside the bus when we arrived here, it's breath-taking to see the supporters. It felt like we were going to play at home. In terms of the group, that's why I came to Munster because of what Munster is about. It's about passion, integrity, real heart and real grit. Munster never seem to do it the easy way and we certainly didn't today. So, I'm incredibly proud to be coach of this team. The message from me to the team was 'brilliant, let's enjoy tonight. It's our third semi-final in a row, it's going to be a massive semi-final and we as a group have got big dreams and we will get to that in a few weeks time."

Confidence you can take next step?

"The fact we're in a semi-final, you have to be there to get to the final. The growth of our squad, not only physically but also mentally. I thought if you just look at the last 20 minutes we were fit enough to come through it, our front-rows made a massive impact and that belief to come through big games away from home....

If you just look at the Champions Cup, we drew with Exeter away, we lost by one point to Castres, beat Gloucester and then came through this.
I believe home and away, we're definitely growing.

Pleased with the try?

We as a coaching group really enjoyed it, it just showed that eight months of hard work comes through in hard moments. I'd really like to congratulate the players. We want to make them better, but once they're on the pitch they have to produce and they did that mentally and physically.

Were Munster more clinical in the end?

"I wouldn't say Edinburgh weren't ruthless, they went for pressure on both sides of the ball.  They went for the corner three times in the first 10 minutes, we knew it was coming and handled it pretty well.
Once we got our opportunities, we used them.
We said it doesn't matter what decision somebody makes, it's a decision we have to react to and our first try was a great example of that. But I'm definitely not going to criticise Edinburgh. They're an incredible rugby team, they're going to go places. I said to Cockers afterwards, it was a fantastic performance from his side. He's instilled a lot of belief here and I respect that"