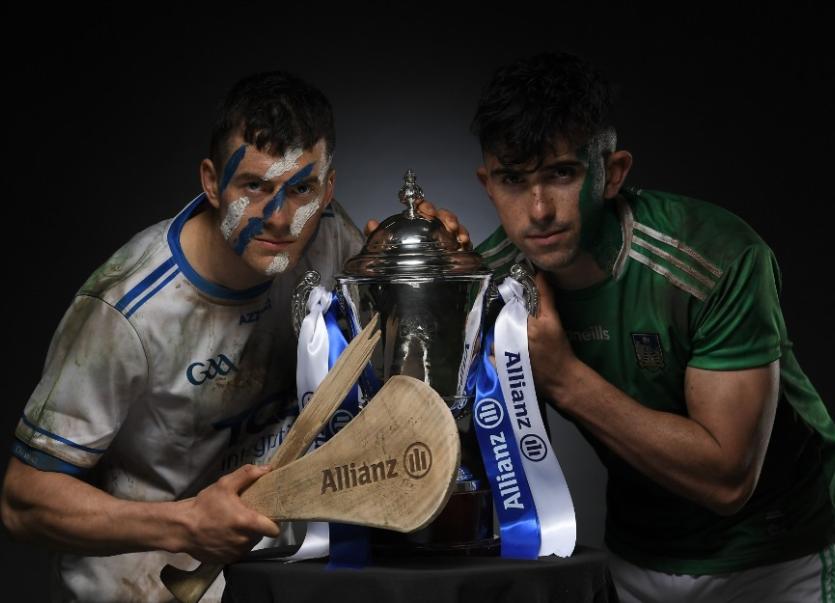 Jamie Barron, Waterford, and Aaron Gillane, Limerick at the launch of the Allianz Hurling League final

LIMERICK are bidding to become just the third county in the last 30 years to win the hurling league title the Spring after they were crowned All-Ireland senior hurling champions.

A first Allianz Hurling League title in 22 years is the prize on offer for Limerick in Croke Park this Sunday afternoon and further illustrating the task at hand is the fact that aside from Kilkenny, Galway back in 1989 were the last county to follow a Liam MacCarthy win with league honours.

Just the third hurling league final in Croke Park in 20 years brings together Limerick and Waterford for the first time.

Seven months after ending a 45 year wait to collect the Liam MacCarthy Cup, John Kiely’s men are now 70-minutes away from a first league success since 1997.

Appearing in a first final since 2006, the Limerick-Waterford decider comes nine weeks ahead of their Munster SHC tie in Walsh Park.

Limerick will be appearing in a 21st final and chasing a 12th success against Paraic Fanning’s Waterford, who are champions in 2015 and also reached the final twelve months later.

Today will be the first hurling league final in Croke Park since 2011 when Dublin beat Kilkenny.

This league final will be the first Croke Park meeting of Limerick and Waterford since the 2007 All-Ireland SHC semi final, which Richie Bennis' side won.

Mike Casey’s return to action in last weekend’s semi final win over Dublin means Limerick have used 33 different players in their seven game journey through the league – incidentally all bar two of the seven games to-date have been away from the Gaelic Grounds.

This Limerick-Waterford hurling final is part of a Croke Park triple-decker of league finals.

The hurling League final is up next at 2pm and the day concludes with Mayo v Kerry in the Allianz Football League final at 4pm.

All three finals will be live on TG4.

Tickets will be available to purchase outside Croke Park - adult tickets cost €30, while U-16s cost €5.