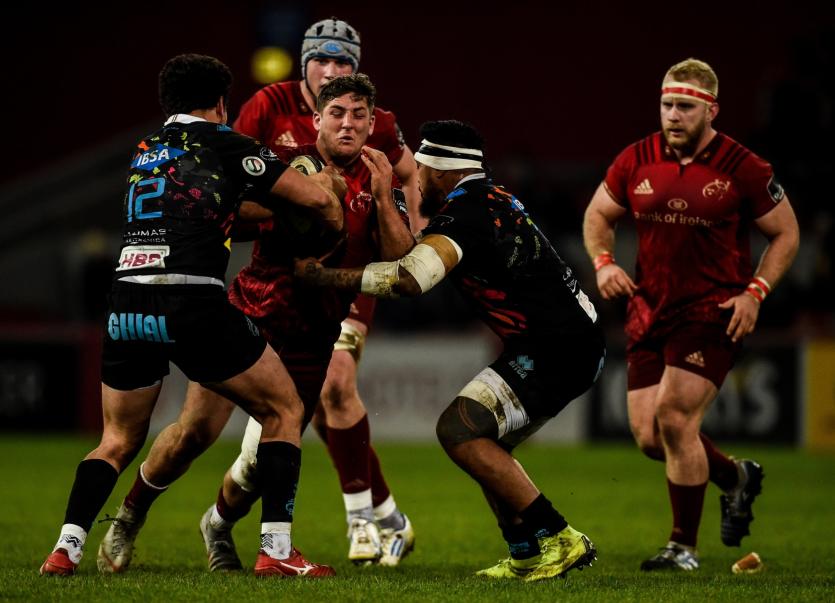 MUNSTER survived a real first half scare before securing a crucial 31-12 bonus point win over Zebre in the Guinness PRO14 at Thomond Park on Saturday night.

The manner in which Munster struggled to secure victory won't have caused undue concern to Edinburgh ahead of the sides' big Heineken Champions Cup quarter-final showdown at Murrayfield on Saturday next, 12.45pm

When Zebre stunned their hosts with two first quarter tries to build an early 12-0 lead, a shock victory for Michael Bradley's side looked a real possibility before an official attendance of 14,226.

"For the first time maybe in the match, Zebre were light and disjointed in defence."

Darren Sweetnam with the try, but Tyler Bleyendaal misses the conversion from the touchline.

A try from prop Jeremy Loughman with the clock already in the red zone at the end of the opening half saw Munster trail by just seven points, 5-12, at half-time.

It was a flattering position for the home side to be in, given Zebre's superiority in that opening half.

However, Munster, boosted by the arrival of Ireland centre Chris Farrell off the bench, stepped up their performance levels significantly in the second half, scoring four tries through Rhys Marshall, Darren Sweetnam, Niall Scannell and Mike Haley, who had made a mistake for tighthead Roberto Tenga's opening try for the Italian side, to bag a bonus point win.

"Munster have just put a bit of gloss on an otherwise patchy and difficult night against the Italian visitors."

The victory ensures second-placed Munster keep up the pressure on Conference A leaders Glasgow Warriors with now just three rounds of regular season fixtures to come.

Munster have now won all 14 of their meetings with Zebre and remain are unbeaten at home in all tournaments since December 2017.

Munster will welcome back several frontline Ireland internationals to their squad next week ahead of next weekend's big Champions Cup semi-final date with PRO14 rivals Edinburgh. The likes of Conor Murray, Peter O'Mahony, Keith Earls, Tadhg Beirne, Dave Kilcoyne and Andrew Conway are set to return to the fold on Monday.

Munster are also hoping that Ireland out-half Joey Carbery will recover from a hamstring injury in time to take his place in the squad for the big date with Edinburgh.

"We came out with a better attitude in the second half.

"I thought we got some rhythm and scored some really good tries."

Munster head coach Johann van Graan was pleased with his side's improvement in the second half against Zebre at Thomond Park.#MUNvZEB #GuinnessPRO14 pic.twitter.com/T77sUx2aJl