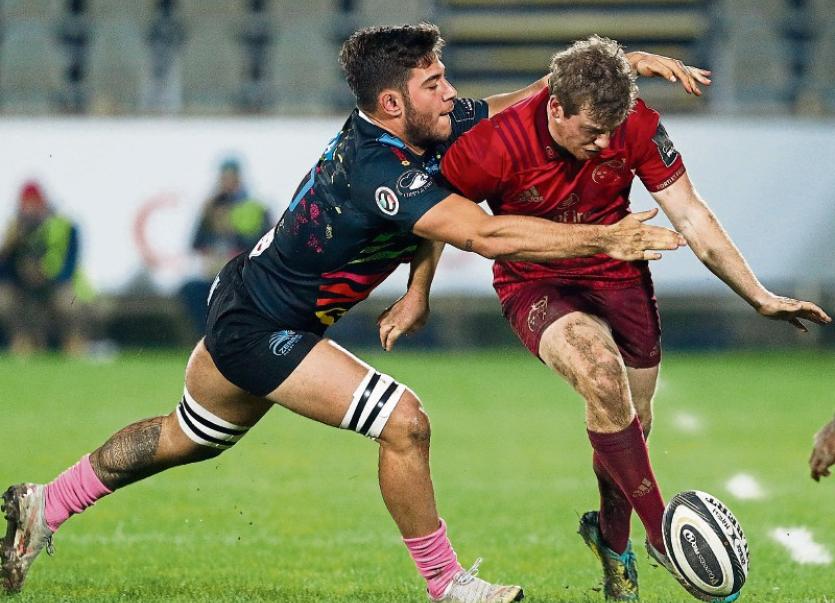 Neil Cronin of Munster kicks the ball as he is tackled by Renato Giammarioli when the sides met earlier this season Picture: Sportsfile

MUNSTER return to Guinness PRO14 action this Saturday when Zebre visit Thomond Park for a crucial Conference A fixture, 7.45pm.

Johann van Graan’s charges sit three points behind pacesetters Glasgow in the Conference A with now just four games to go in the regular season.

Munster look set to be without their five Irish internationals who started in Saturday’s disappointing defeat to Wales in the Six Nations for this weekend’s visit of Zebre.

All of the Ireland players will be back at the province on Monday next to begin preparations for that big Heineken Champions Cup clash with Edinburgh.

Munster head coach Johann van Graan said: “Some of them (Ireland players) will be in this week and some return next week. We will handle each one separately according to their needs.

“We have to rest certain guys and some guys need a well deserved break and ahead of building up to the next block of games.”

Twenty three-year-old Carbery missed the last three rounds of the Six Nations due to the injury.

Asked about the prospect of the former Leinster fly-half being fit to face Edinburgh at UL this week, van Graan said: “I don’t want to speculate. I hope that he’ll be back for next week’s game. It’s a bit early to say whether I expect him to be back, I really hope he’s back. He’s going to be with our medical team this week and hopefully we can get him into some rugby this week or next week.”

Van Graan appreciates the need for Munster to get back to winning ways in the PRO14 this weekend in order to boost their hopes of securing home advantage for the play-offs.

“For Zebre on Saturday, we will take stock of the Irish lads coming back, finding the balance over the next 10 weeks, but most importantly getting a win against Zebre.

“It is four points on offer at home and four points we have to work hard for. If there is a bonus available we will go for that as well. The most important thing is that is a new rugby game, start of a new block, we haven’t been together as a team for quite a bit of time now. We’re second in our Conference in the PRO14 and we have to keep up to Glasgow. Exciting times ahead.”

Marshall said he was shocked to learn of the attack, describing it as ‘atrocious’.

Twenty six-year-old Marshall who joined Munster from the Chiefs in 2016 said: “It was shocking for me. I had a bit of a restless night that night. Just reading about it, I thought it was all pretty surreal.

“Ya, thoughts and prayers with those people. Your love goes out to them. It was pretty atrocious, I thought. Ya, pretty shook by that, everyone at home especially and you can see the world is.

“For it to be so close to home and you are not actually there sometimes it gets to you a bit.”