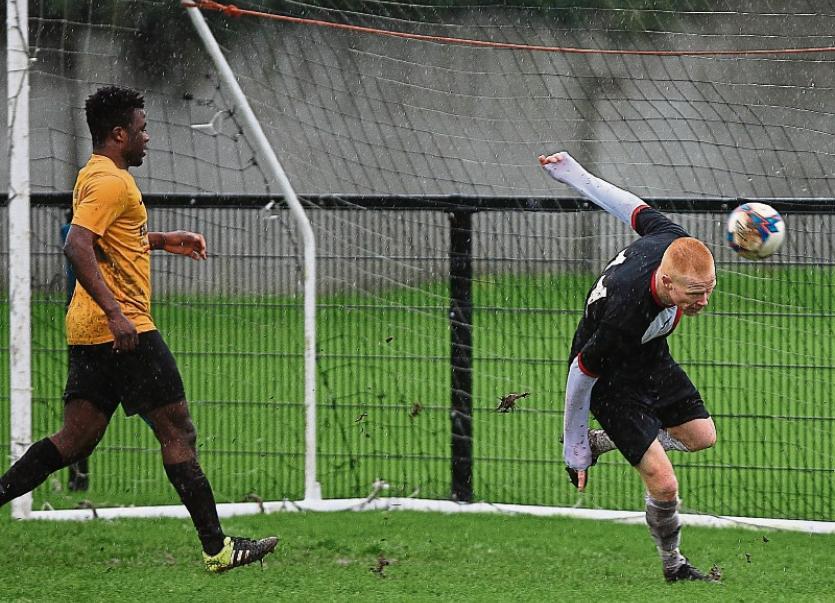 Janesboro's Adrian Power scores his sides third goal during a recent meeting with Aisling. This Friday night the ‘Boro’ take on Pike Rovers in the Tuohy Cup final

The first silverware of the season will be presented this weekend when old rivals Pike Rvs and Janesboro meet in the final of the Premier League's Jack Tuohy Cup.

As the top two seeds in the competition, once the draw was made it always looked like these two would contest the decider such has been their dominance in local soccer over the last few seasons.

There is nothing to choose between the sides although Janesboro have won five times over the last three seasons. However Pike won on a penalty shoot out in last seasons Munster Junior Cup final and their only game this season finished all square.

Pike's path to the final began with a first round game versus Kilmallock which they won 3-0 thanks to goals from Jonathan Grant (2) and Conor Kavanagh.

Shane Walsh's goal in the quarter final saw them past Regional Utd.

They had an equally tough game in the semi Final when they squandered a two goal lead before beating Fairview Rgs on a penalty shoot out.

Janesboro, by contract had a much easier run to the final. A bye in the opening round was followed up by Carew Park forfeiting their quarter final game.

In the Semi Final they had things pretty much their own way in a 2-0 win over Aisling Annacotty.

As usual focus will turn to individual battles around the park.

Both players are match winners but it all depends on the service they get so a key element for success will be to cut of supply to these two.

With only two games scheduled for the weekend a big crowd is expected for what could be another memorable encounter. Kick off time is 7.00pm.

The only other game at the weekend is a Munster Junior Cup quarter final when Kilmallock will be vying for a place in the last four hoping to join fellow Limerick sides Pike Rvs and Geraldines.

A small hurdle in their way is Tipperary side St Michaels. Saints beat Evergreen to reach the last four of the FAI Junior Cup last weekend so will be full of confidence when they visit Limerick on Saturday.

On their day they are capable of beating the best and taking encouragement from Aisling and Regional last weekend, can go into Saturday's game with a renewed confidence.

Former St Michaels player Tommy Heffernan has been one of the constants for Kilmallock and his hat trick last weekend augers well for his sides hopes of making the last four.

For more soccer see limerickleader.ie or use #LLSport on social media