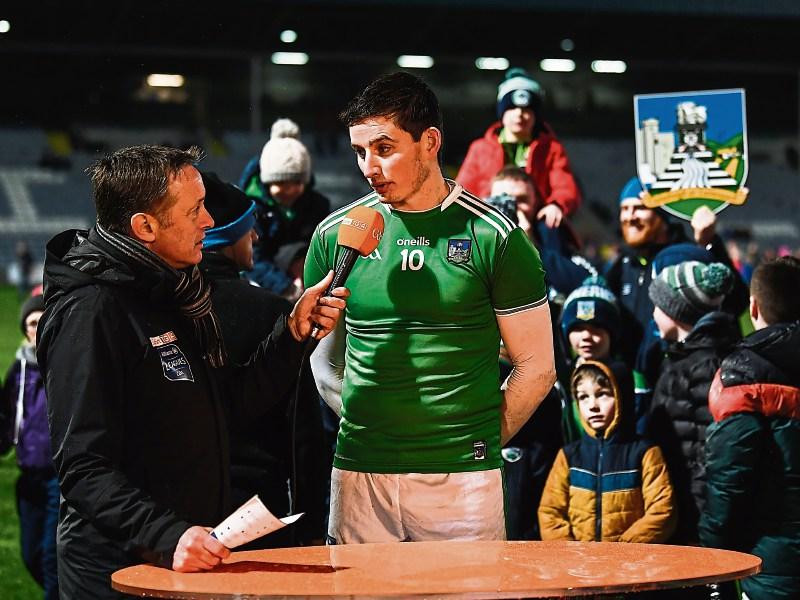 Gearoid Hegarty chats with TG4 after the game

The outcome was never in doubt but I really liked the way Limerick applied themselves in this game.

Their attitude was perfect and it shows that despite playing with only a handful of their All-Ireland winning team the demeanour was refreshing and that attitude has permeated to every member of the squad.

So much of what Limerick are doing has much similarities when Kilkenny were at their greatest. So much of what they did came down to attitude and application and Limerick are showing no signs of easing up from what we saw in last years championship.

Every player knows he has to perform when asked to do so and if not there is someone waiting to take their place.

Limerick had this game against Laois wrapped up in the opening quarter. Once Seamus Flanagan got that goal after good work by Gearoid Hegarty and the final pass by Robbie Hanley.

The manner in which Limerick went about their business was superb, they showed Laois the ultimate respect but they wanted and did get the job done early in O’Moore Park.

Gearoid Hegarty, at twenty four, was the oldest member of the Limerick forward line that started this game and like other days in the past he left his mark on this game.

He finished the game with three points but his overall contribution was outstanding. Strong in the air, strong on the ball and while he scored himself he also had the vision to find others.

Gearoid Hegarty is a quality young man in many ways and his attitude is always pitch perfect.

He can handle himself in all sorts of situations and he has certainly arrived as a real leader in the Limerick half forward line.

This line proved crucial to Limerick winning the All-Ireland last year and I would think if they are to retain it this year they will have to be equally as prominent.

The forwards had the Laois defence in real trouble, they got good ball in but their movement before the ball arrived and in general was superb. Limerick have about eighteen forwards to call upon but while we wont see too much change from last year I do think we will have at least one change.

The fact that players have got valuable game time will greatly assist the development of the players and the team when called upon.

If John Kiely has plenty of players to call upon in attack he does not have the same luxury in defence.

The management are working on developing players in defence and you can see that Barry Nash is being groomed for a place in the half backline.

It took him a while to settle against Laois and more game time will be needed but it’s about finding cover in defence.

Mike Casey has a bit to go before he comes back into action but it has allowed the management the opportunity to try players at full back, corner back and also in the half backline.

Dan Morrissey had a fine game against Laois, he has developed hugely and now offers Limerick cover in a few positions. I expect Mike Casey to fully recover and if that is the case then the backs for the championship will be as they were last year.

Tom Condon has had a fine league so far, he was good again last Saturday but his role come championship will be from the bench unless some of the inside line pick up injuries.

Cian Lynch and Darragh O’Donovan will be at midfield come championship but the league has shown that both Colin Ryan and Robbie Hanley have moved up the picking order.

Like others, the National League has been good to them. Hanley is just into the system but he has a great engine and that will be important come championship time.

His hurling still needs to be worked on but that will come. The one player that is very well equipped is Colin Ryan. The Pallasgreen man has buckets of skill and his application has been good so far this year. He has the ability to play in defence or attack.

The Munster Championship was turned upside down last week with the news that Waterford will have two matches now in Walsh Park.

Make no mistake this opens the championship up and both Limerick and Clare will have to make the journey. I was in Walsh Park last Sunday and getting a result here will not be easy. The ground can hold only 11,000 but as we saw last year home advantage is very important.

It was clear Waterford have done a good bit of work with the pitch and I think that will be in great order come championship.

Overall it’s a very tight ground, the crowd will be almost on the pitch and that brings its own pressure.

“It was very special to hear the crowd so up for the game and the fact that we now have two games at home is massive.

It’s great for the Waterford supporters and it’s most especially great for the players. Playing at home will drive the Waterford players and while championship is a bit away we certainly got a great boost with the news that we will have the All Ireland champions Limerick coming here to Walsh Park.”

From last year’s championship to the National League so far has seen Limerick seriously consistent. This has not happened by accident and the formula for that was set long before they went on the team holidays.

The players, management and the entire set up have shown themselves to be really driven for more success. Limerick are now safe in the league semi final and can sit out next weekend. Limerick last won the National League title in 1997.

Tom Ryan was the manager then so a win in this competition is long overdue. It’s well within Limericks grasp and I think this young team are driven by the fact that they want to win as much as they can.

The squad that Limerick have now is capable of being serious contenders for the next while but others will not stand idly by. The final games in the league will offer a window to the summer but they will not answer the sort of questions that will be asked in the championship.

Limerick are in a really good place, they have not over extended themselves and they are comfortable in a league semi final. Having put themselves in this position they will go all out to win the league.

Strong challenges will come for sure but Limerick right now are a bit ahead of the remaining teams left in the knockout stages of the league.

It promises to be a very interesting few weeks ahead and Limerick are ready to deal with whatever comes their way.