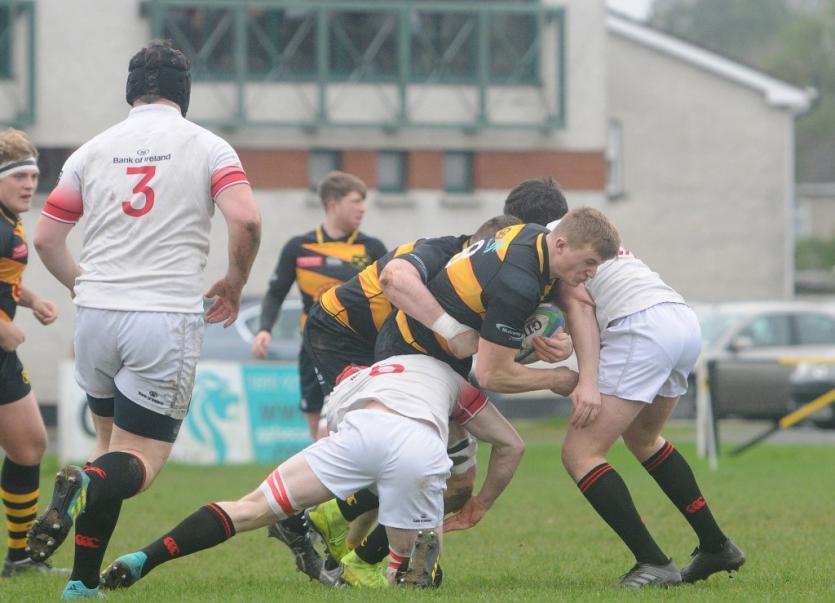 The fourth last series of regular season fixtures provided crucial wins in Division 1A for, top four play-off-chasing Garryowen 24-14 victors over UCD at Belfield and a vital 24-18 bonus point win for Young Munster over Dublin University at Clifford Park in their battle for top flight survival.

Also in Division 1A, Shannon have dropped into the relegation play-off position on points difference after the Parish side suffered a heavy 45-14 defeat to Clontarf at Castle Avenue.

Meanwhile in Division 2A, fifth-placed UL-Bohemian and sixth-placed Old Crescent maintained their push for a promotion play-off place after recording wins.

In Division 2C, promotion-chasing Bruff lost out 37-20 to league leaders Ballina in Co Mayo, while Thomond's relegation worries have deepened as the division's bottom side succumbed 22-33 to Malahide at Liam Fitzgerald Park.

In the top Division, fifth-placed Garryowen sit just one point off the play-off places following their victory over UCD.

Garryowen, who ended a two-game losing run with this victory, scored three tries in all from Rob Guerin and Andrew Keating, while the Light Blues were also awarded a penalty try.

WATCH: Penalty try awarded to @GarryowenFC which helped clinch victory over UCD in Division 1A of the All-Ireland League at Belfield today #LLSport #AIL pic.twitter.com/wxkOqMZXCB

Centre Peader Collins also kicked a penalty goal and two conversions. It now appears as if the last play-off place in the league will be against Conan Doyle's Garryowen and Dublin University who enjoy a one-point lead over the Dooradoyle outfit.

Young Munster boosted their survival hopes in Division 1A when moving out of the relegation zone when scoring their first win in six attempts against Trinity.

Airey also added two conversions in the windy conditions. The win sees Munster move up to seventh-place in the table, but just one point ahead of both UCC and Shannon. Intriguingly, Munsters face UCC and Shannon in their next two AIL fixtures.

Shannon dropped into the relegation play-off position following their fifth defeat on the bounce in Division 1A.

Ben Daly and Luke Moylan did manage to score first half tries for Tom Hayes' side which trailed 14-21 at half-time. However, 'Tarf pulling clear after the restart, outscoring their visitors 24-0 during that period.

Next up for Shannon is a crucial home date with Terenure College at Thomond Park on Saturday, March 23, before that mouth-watering derby clash with Young Munster at Clifford Park on Friday, April 5.

The Red, Red Robins had two tries from Merlin O'Connor, while Mike Mulally and Robbie Bourke, in injury time also dotted down. Christy Neilan's side had trailed the Dubliners 3-8 at half-time.

Also in Division 2A, Old Crescent also remain in the promotion play-off mix with just three rounds of regular season games to go after inflicting just a fourth defeat of the season on Navan.

Crescent built an early lead with a brace of tries from the prolific Val McDermott, both of which were converted by Ronan McKenna.

The ice-cool Larry Hanly grabbed victory for the Rosbrien side with a terrific long range penalty goal in the 78th minute after the scores had been tied, 14-14, at that point.

In Division 2C, Bruff remain third in the table and well placed to secure a promotion play-off game, despite losing out to high-flying Ballina by a 17-point margin 37-20.

Bruff, who led 10-6, at half-time, had a try from New Zealander Taylor Jones, while David O'Grady added a penalty goal and conversion.

However, the concession of four tries after the restart left Bruff facing a mountain to climb. Kevin McManus and Cian Tierney did manage second half tries for the South Limerick side, however.

Bruff enjoy a four point lead over fifth-placed Omagh in the battle to secure a top four spot.

Also in Division 2C, Thomond remain rooted to the foot of the table, four points off ninth-placed Seapoint and seven points adrift of eighth-placed Bangor following their 11-point defeat to Malahide.

The Royal Blues managed tries from Richie Ryan, Mike Madden, while out-half Evan Cusack kicked a penalty and conversion as the home side trailed 15-19 at half-time at Fitzgerald Park.

An intercept try and conversion from the prolific Cusack had Thomond 22-19 in front after the restart. However, promotion-chasing Malahide managed two converted tries before full-time to ease to victory.