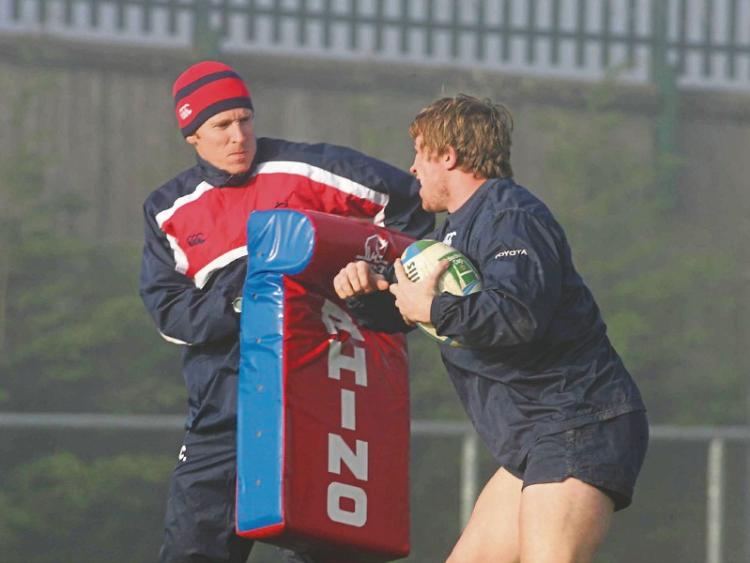 IT seems like a time light years away from the modern era, with the phenomenal advances that have been made in sports science, strength and conditioning, physical fitness.

When Feargal O'Callaghan came on board as Munster's fitness advisor in 1999, he was one of just three full-time people involved in the province's backroom team. Coach Declan Kidney and assistant coach Niall O'Donovan were the only other two full-timers.

FO'C: “I'm originally from Castleconnell. Played hurling and Gaelic football with Ahane, mainly hurling. We had superb coach George Lee, we won the Feile, won centenary county final in U12 or U14 I think.

“George was the first person that gave me a love of sport. His attitude was 'give it a go'. He would tell us if you think you can score, go for it. If you miss it he wouldn't give out to you, but he would give out if you don't have a go.

“I played rugby when I went to St Munchin's College, my first taste of it. I was a sub on the Junior Cup team. Pres' beat us.”

How did your passion for rowing begin?

“Jimmy and Gerry O'Neill from Limerick moved to Castleconnell and they were involved in rowing with Limerick Boat Club. We have a lovely stretch of river.

“I managed to win six national senior titles and I rowed for Ireland for a number of years, including at the World Championships in 1993 in a lightweight cox-less four. Neville Maxwell, who became an Olympian, was also in the boat.

“We moved from Castleconnell the year I did my Leaving Cert and I joined Shannon Rowing Club and that is when things really took off.

“After school, I did construction studies at Moylish and got a job in London as trainee quantity surveyor over there.

“I did join London Rowing Club over there, and that brought me to another level.

“I came home to finish college and I wasn't home two months when I made Irish team in rowing. College took back seat then.

“Ian Cumiskey, a coach with Shannon Rowing Club had a big influence on me. When I made the national squad I used to go down to the National Coaching and Training Centre (NCTC) here at UL. It had just opened, autumn winter 1991, I would ask a million questions.

How did you get the role of fitness advisor at Munster?

“I heard Young Munsters were looking for someone to take care of fitness, Brian Hickey had just taken over as coach, so I ended up doing that.

“There, I worked with the Claw (Peter Clohessy) . He was preparing for the 1999 World Cup at the time.

“One day he said Munster are going to be looking for somebody. That really interested me. There were no strength and conditioners in Ireland at the time.

“I thought, how am I going to do this? Philip Danaher was a few years ahead of me in school at St Munchin's. Philip was Ireland backs coach, so I got in touch with him.

“I asked him if he could introduce me to Declan Kidney. I met Declan at the Castletroy Park Hotel and somehow managed to persuade him I was the man he was looking for.

“The job description was fitness advisor. It was full-time, it was not the best paid job in the World at the time and there was a part-time person in Cork, Mark McManus, with the lads there.

“It was my responsibility to oversee the fitness of everyone. Mark supervised sessions in Cork. The following year Mark was made full-time.

“I was lucky because I was an international athlete, I had some idea. Rowing and rugby are quite different, one is an endurance sport and one is a power and speed sport. There would have been mistakes I would have made early days.

“I used stuff I would have found useful in my own training. We were all feeling our way.”

John Langford is attributed with bringing a different mindset about fitness when he came to Munster from Australia. Is that true?

“When I came in to Munster, a lot of the players were full-time. That was the year it went full on. There were probably 35 full-time players.

“I was extremely lucky that John Langford signed for Munster Rugby. I can honestly say hand on heart and it is no reflection on Jim Williams or Christian Cullen or any others, they are all fantastic, but he was the single biggest influence on me from a rugby point of view.

“He was the only one who had ever really been a professional before he came in. Even the lads that were pro for the previous couple of years, (Peter Clohessy) Claw, (Mike Galwey) Gaillimh and (Anthony Foley) Axel, they weren't really pro. We didn't really know what pro was.

“John came in and he was brilliant. He helped me no end. He had come from a culture where they had strength and conditioners, he was a great help to me chatting about things. He'd say we did this in Australia, would we give it a try? he was an unbelievable athlete, the fittest of the lot of them.

“I remember we had a goal setting meeting down in a lecture theatre in UL. Declan (Kidney) brought in Dave Mahedy to do the goal setting. It is a serious enough topic, but Dave would bring a bit of fun into it. It was really good like that.

“In this particular one they were talking that we might win all our home games, set some targets like that, win the home games and compete when we are away.

“While I did make lots of mistakes along the way, the one area I was very good at was fitness, actual running fitness. The team did very well. We were winning games with 10 minutes to go.

“The Bordeaux semi-final in 2000 against Toulouse was obviously a huge game, but for me personally the games that stick out are the two Saracens that year, we played them at Vicarage Road, they had us beaten four times that year and we never gave up. They were star-studded. We beat them again at home.”

Did you have to handle older and younger players differently at the start?

“You had to manage the old fellas. The younger lads learned so much off of them.

“(Keith Wood) Woody drove things as well, coming from the professionalism of the Premiership. He demanded things of the lads. Slowly but surely it got more professional.

“I played with Old Crescent thirds in my second season with Munster. The lads would say at a gym session on a Monday after a game that they were sore and tired. I didn't quite get that, you are not beaten up in rowing. Playing thirds rugby was in my favour.”

The set-up at Munster changed after the 2004 Heineken Cup semi-final?

“I was in the crowd with my wife Rhoda the day Munster won their first Heineken Cup final in 2006 I wasn't working that day. It was a great day.”

When did you get involved with the Munster Academy?

“After 2008 Heineken Cup final, I sat down with Tony McGahan (Munster head coach). They knew there was an issue with young players coming through. There was a problem long term and they needed to tackle this whole Academy situation. Ian Sherwin had just come on board as Academy Manager.

“Tony asked if i would be interested in a change. Initially, my thought was, no, I don't want to leave the senior set-up. I had a look at it properly.

“I was married at this stage, we had our daughter and another on the way. Life-work balance would be better. You are not working seven days a week with a professional team, it is more or less Monday to Friday.

“So I decided to give it a go. My friends thought I was mad and initially I thought so too, but after a while I found life was better. I got back to being able to do my own training stuff.

“I hadn't done anything for myself in a while and I ended up running the Marathon de Sables in Morocco and that summer I did another one in Iceland called Fire and Ice.

“The Academy was developing and Ian Sherwin was in charge. We had skills coaches, a conditioner based in Cork and I was the lead conditioner.

“We oversaw everything age grade, Academy Age-Grade. We had a very good group of Academy players that first year, Peter O'Mahony, Conor Murray, Mike Sherry, Dave Kilcoyne, James Cronin, these guys are all at the top now.

“We had a sub-academy first, for the first year out of school, non-paid. It was a proving ground and then a three-year Academy

So what now, a new job in Galway, back at the grass roots of sport, building for the future. What a new start”

“My new role is High Performance Sports Lead at NUIG, we have so much to look forward to. That keeps you alive”