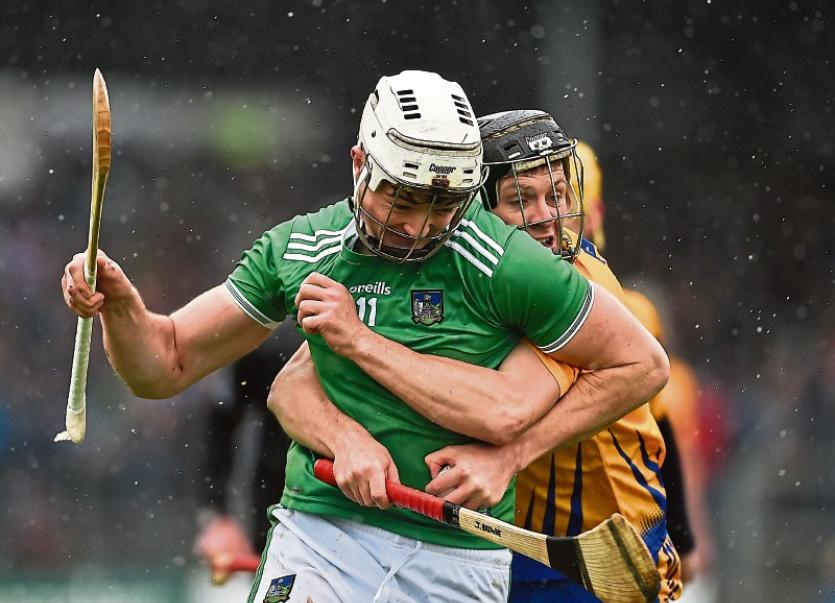 Hug Time: Kyle Hayes of Limerick is tackled (hugged) by Jack Browne of Clare when the sides met in Ennis

Seconds before the throw in on Sunday in Cusack Park, there were several off the ball 'altercations' between Limerick and Clare players. The tone had been set.

Clare and Limerick went toe to toe in the wintery conditions with all the commitment and will to win of a championship encounter.

The near neighbours know eachother so well, that familiarity has bred contempt. The interesting thing for me on Sunday though, was that Limerick didn't take a step back.

Throw your mind back to Wexford Park in the opening round of the league and it was the same then.

Fresh off the plane from Mexico, the All-Ireland champions gave as good as they got from the 'yellow bellies' even losing Seamus Flanagan to a red card.

Wins over Tipperary and Kilkenny were achieved in a similar manner. A poor start against Cork gave the impression that Limerick were 'not up for the fight' but once the game was in the balance, Limerick showed that the fight is very much alive.

Last Sunday was the side's biggest physical and mental test so far as All-Ireland champions.

Having met the President of Ireland during the week, coupled with waking up to see snow falling in March, Limerick teams of the past might have 'switched off' for the afternoon. Not this vintage.

The tussles before the whistle set the tone and Limerick were prepared to play the tune.

Off the ball battles were fought by Tom Condon, Gearoid Hegarty, Aaron Gillane and Kyle Hayes.

Even better to see was the willingness of the players to fight for one another. It might not be the pretty side of the game, but when the questions were asked, Limerick were more than willing to give answers and indeed, ask a few of their own.

When asked after the game if, as champions, Limerick had a target on their backs for special attention, John Kiely joked, “I've had a target on my back since the day I was born”

His side now have that target too. The Limerick hurlers are there to be shot at and if the hunger shown by the men in green is anything to go by from a 'dead rubber' of a league game, in the snow, in Ennis, in March, then there is no need to worry about this bunch being content with winning last August. There might be even more to come from them in terms of their potential.

The next test now lies at the feet of the players who are going to be given their shot against Laois on Saturday night.

John Kiely picks his teams based on training performances and does not believe in a 'box ticking' exercise in terms of handing out starting berths.

Players only have to look back to December 2017 in Mallow, where 11 players who started that night, started the All-Ireland final.

Limerick are not just having to show their appetite for the fight to others, but also internally as a panel.