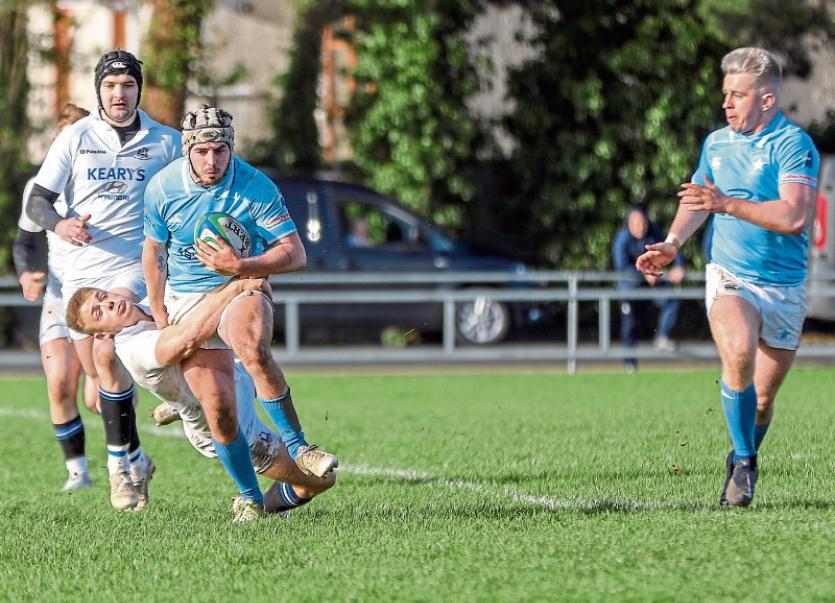 Hang in there: Garryowen centre Peader Collins is tackled by Cork Con Fullback Liam O’Connell during their AIL Division 1A meeting last Saturday in Dooradoyle

WITH just four series of games to go in the regular season, Limerick’s seven All-Ireland League clubs will be desperate to pick up crucial league points in their fixtures this Saturday.

In Division 1A, fifth-placed Garryowen, who have now lost their last two games in the top flight, face a crucial away date with UCD as the Light Blues look to boost their hopes of securing a play-off position.

Also in Division 1A, Shannon, who have lost their last four fixtures on the bounce, travel to Castle Avenue to take on Clontarf in a crucial fixture.

Seventh-placed Shannon are just four points clear of the relegation play-off position in the table, currently occupied by Young Munster.

Munsters’, face a crucial fixture themselves at home to Dublin University at Clifford Park having picked up two bonus points in their defeat to Lansdowne last weekend.

Meanwhile, in Division 2A on Saturday, fifth-placed UL-Bohemian look to boost their promotion prospects when hosting Blackrock College, while sixth-placed Old Crescent travel to Navan.

In Division 2C, relegation-threatened Thomond will look to bounce back from a heavy weekend defeat to table toppers Ballina, when hosting Malahide at Fitzgerald Park, while promotion-chasing Bruff travel to Co Mayo to face high-flying Ballina.