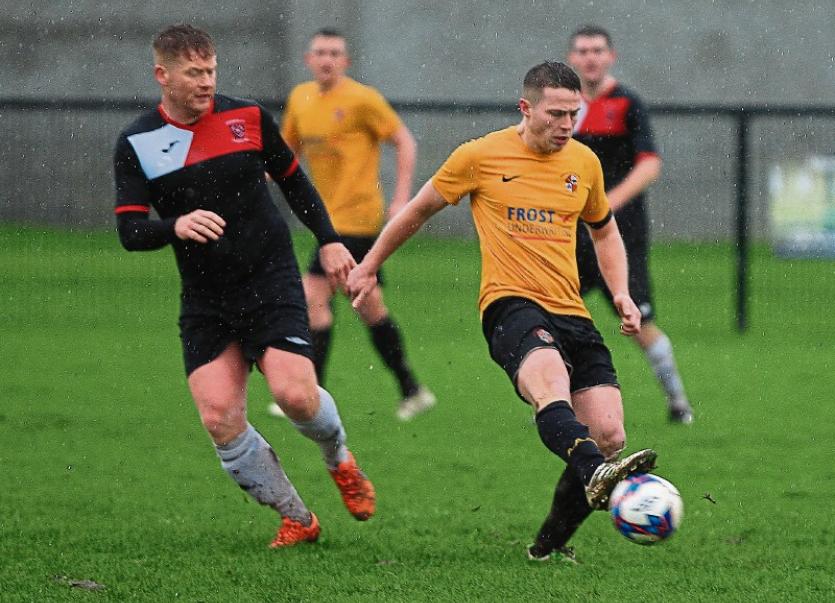 Aisling Annacotty's Jason Lipper blocks this pass to Janesboro's Thomas Clarke when the sides met on Sunday. This weekend is huge weekend for Aisling as they play in the last eight of the FAI Junior

Two Limerick teams face one of the biggest games in their history when they battle it out for a place in the semi-finals of the FAI Junior Cup.

Regional Utd host favourites Sheriff YC in Dooradoyle while Aisling are on the long road to meet Westport in Mayo.

While some may think Regional drew the short straw, the counter argument is that home advantage is a huge bonus in the FAI Junior Cup.

The Dooradoyle side have shown plenty of times this season that they are capable of beating the best, so they should relish rather than fear a tilt off the best side in the country.

Last Sunday’s Lawson Cup defeat to Ballynanty Rvs will have annoyed Tom O’Connell and Shane O’ Donoghue as they had been well in control before petering out in the tie.

On Sunday they need to be a bit braver going forward and ditch the defensive nature they are prone to adopt.

With the right attitude Regional are well capable of making it to the last four.

Aisling, like Regional, go into their clash on the back of a disappointing defeat last weekend.

They fell 5-1 to Janesboro, but that setback will be well forgotten by the time they take the field on Sunday.

Aisling have a very young side with serious potential, but the bright future does not mean they must wait. They are capable of turning in a big result as they proved against Ballymun in the last round.

Again, like Regional, Aisling need to give it a real go, and not to regret their approach afterwards.

Westport will provide a stern test, but they expect to win and that could stand to Aisling Annacotty.

In the Munster Junior Cup, a local derby involving Geraldines and Ballynanty Rvs is sure to draw the crowds to Garryowen. With a place in the last four on offer we might see sparks fly in what promises to be a humdinger of a tie.

Both had good wins at the weekend and come into the tie well focused.

‘Balla’ stuck to their task to see off Regional while Geraldines beat Nenagh in League action.

Geraldines go into the tie as slight underdogs but in Garryowen the Candy stripes have shown they can beat the top sides.

‘Balla’ have picked up a couple of players to top up their panel and the scoring form of “new” striker Dermot Fitzgerald will give them added confidence.

A victory over another Waterford side in the previous round will have given Pike Rvs an idea of the level in the county and they will be well aware of the task at hand.

Pike were superb in their last outing, a 4-0 win over Regional. Prior to that win they were blowing hot and cold in a few games but still managed to scrape through.

Manager Mike Shiel will have instilled into the players that at this stage of the competition nothing but their best will see them progress.

One Lawson Cup tie up for decision with two in-form Division 1B sides battling it out for a place in the semi finals when Hill Celtic host Newport. Both teams have been very impressive all season and it has the ingredients of a real cup thriller.

In the PJ Matthews Premier League leaders Janesboro will be looking to increase their lead at the top of the table when they host Prospect Priory.

The Champions were very impressive in their Lawson win over Aisling last weekend and you cannot see Prospect halting their gallop.

Charleville are at last chance saloon when they host Kilmallock.

A win for the Cork lads would give them renewed hope but looking at their remaining fixtures you feel defeat here will seal their fate.

Nenagh take on Fairview Rgs with little at stake.

The battle for promotion to the Premier League continues in Division 1A with several key games scheduled.

Tonight (Wednesday) we will find out the remaining semi finalist in the Div 1A O’Halloran Cup when Aisling B host Moyross at 7.00pm in Jackman Park.