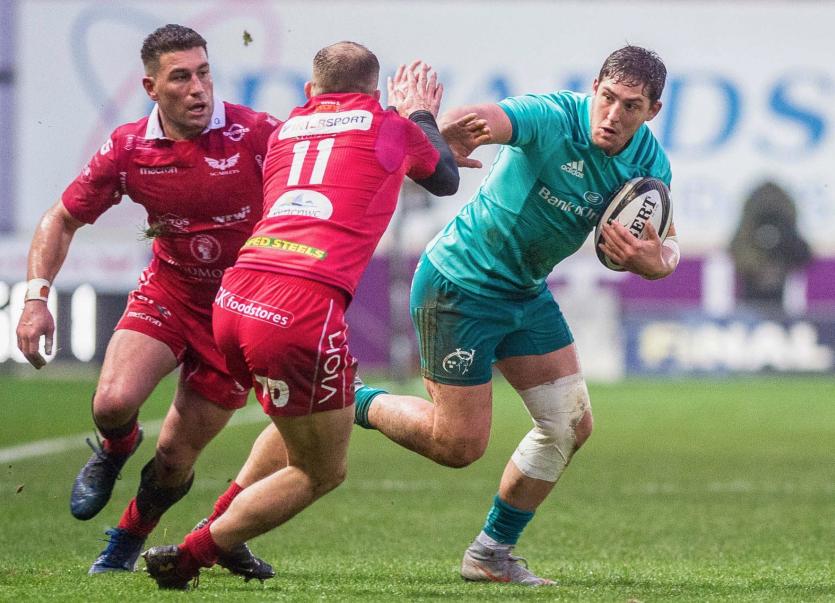 Dan Goggin on the charge for Munster against the Scarlets

Munster have dropped to second spot in Conference A of the Pro14 following a 10-6 loss to the Scarlets at Parc y Scarlets this evening. Johann van Graan's men had to battle against atrocious conditions in what was a poor game of rugby despite the surroundings. Munster's loss was made harder to take when put alongside Glasgow's 42-10 win over Zebre in Italy, which put the Scottish side top of the conference, by three clear points.

The opening to the game, played in horrendous conditions saw Munster earn some valuable territory from the boot of Bill Johnston. The field position and pressure from the men in 'copper green' (Munster's away kit) saw them take the lead after just five minutes as Johnston was on hand to kick a penalty in front of the posts following a Scarlets indiscretion at the breakdown.

The Scarlets replied however, just five short minutes later, as Ioan Nicholas crossed for a five pointer, which had to be given the all clear by the TMO. In what was a classic Scarlets try, a brilliant off load by Johnny McNicholl set up the young his felllow wing-man for the score. The extras were added by returning Welsh international Leigh Halfpenny.

Once more Munster got back into the game by winning the tactical kicking battle and winning penalties in the Scarlets 22. With 21 minutes on the clock, Munster won two separate advantages in the Welsh side's 'red zone' and Munster heaped the pressure on with a kick to the corner and a tap and go penalty when points may have been on offer. Following some impressive carries by the Munster pack, they left empty handed following an impressive counter ruck from the home side.

The first half ended as it had taken shape throughout the 40 minutes. Munster, dominant in possession (79% possession, 84% territory) made their advantage tell with the boot. Mike Haley kicked a 'Garryowen' which was knocked on by the Scarlets, before being re-gathered in an offside position. A penalty kick from Bill Johnston left the score at 7-6 at the short whistle.

The home side started the second half the better as they held onto the ball for large periods, before making the pressure tell by winning a penalty on the Munster line. When Leigh Halfpenny kicked the three points, his side went into a 10-6 lead after 48 minutes.

The weather played a massive role in this game and both sides struggled to get any momentum in the next 10 minutes. Munster did cross the line for a try in the 62nd minute, however the TMO disallowed the try, adjudging that Rhys Marshall had acted as a blocker at the front of a maul, as Jean Kleyn touched down.

The rest of the tie was as stop start as the opening hour. Munster did end the game on the front foot. A lineout deep in the Scarlets half lead to some sustained possession, but a knock on from Kevin O'Byrne as the clock went red, saw the four points slip away from Munster and give the home side the win.

Munster are now off until March 23, when they face Zebre at Thomond Park. That game will be the last Pro14 game Munster play before their Champions Cup  quarter final against Edinburgh at Murrayfield on March 30.