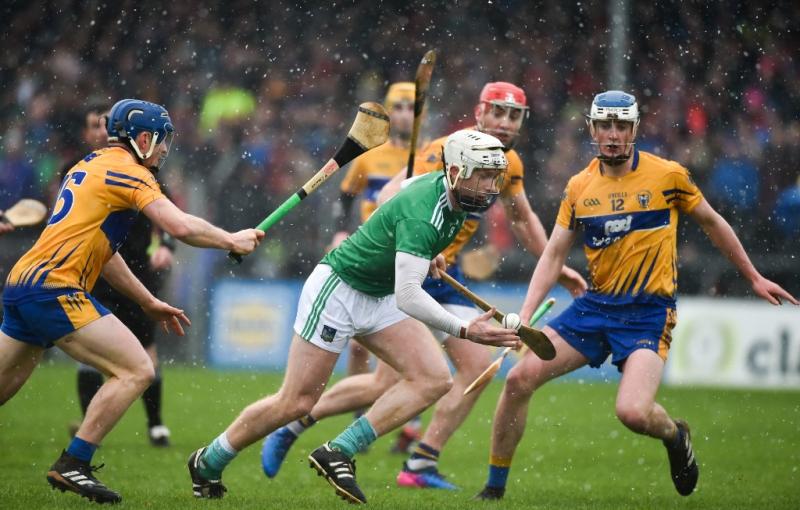 LIMERICK and Clare played out a thrilling draw in the Allianz Hurling League in Ennis this Sunday to warm the hearts of both Shannonside supporters.

The result ensures Limerick finish top of Division 1A and will play Laois in the quarter finals - a toss for home advantage.

The first half was played in constant snow and the second half in constant rain on a bitterly cold day in Ennis.

Clare were fastest from the blocks with Tony Kelly and Shane Golden points from distance but the home side were to score just once more from play in the remaining 30-odd minutes in the half.

Limerick's opening score was a goal - eight minutes into the tie Gearoid Hegarty thundered a low drive to the net after he had intercepted an attempted clearance.

Limerick had lost Sean Finn to injury but two frees from Aaron Gillane had the men in green 1-2 to 0-3 ahead at the mid-point of the half.

Kyle Hayes had the best of the first half points in the 18th minute - the Young Hurler of the Year finishing after fine play between Hegarty and Declan Hannon.

Limerick were now 1-3 to 0-4 ahead but back-to-back Peter Duggan frees then had the game level for the only time in the half.

Clare weren't to score for the final 10-minutes.

Paddy O'Loughlin and Peter Casey scores from play as well as points from placed balls were to ensure the four point interval Limerick lead.

It was a half where Limerick hit just one wide, while Clare had three - all from Duggan frees.

Clare had the ideal start to the second half when Shane Golden soloed easily through the middle to slip the sliothar into the net past the advancing Nickie Quaid.

Gary Cooney fired over within 30-seconds and the game was level for just the second half.

The Limerick response was impressive with four successive points to lead 1-11 to 1-7 after 12-minutes of the new half - two Gillane frees and two from play from Peter Casey pushing Limerick four clear again.

This spell also saw a Limerick penalty saved by Donal Tuohy - Gillane was fouled and took the penalty but his drive was diverted away by the Clare goalkeeper.

Clare went 16-minutes without a score, which came to an end with a Duggan free to leave three points between the sides entering the final quarter.

Then it was Limerick's turn to hit a barren patch and Clare battled back with a run of three points - Ryan either side of Duggan frees.

Then came the Clare goal - Duggan finishing after Golden created the opportunity. Clare two points up with six minutes to play.

Finally after 18-minutes Limerick returned to the scoresheet when Gillane pointed a free in response.

Duggan and Gillane exchanged pointed free and as the game entered five minutes of injury time, Clare were a point ahead.

In the fifth minute of injury time a Gillane free levelled.