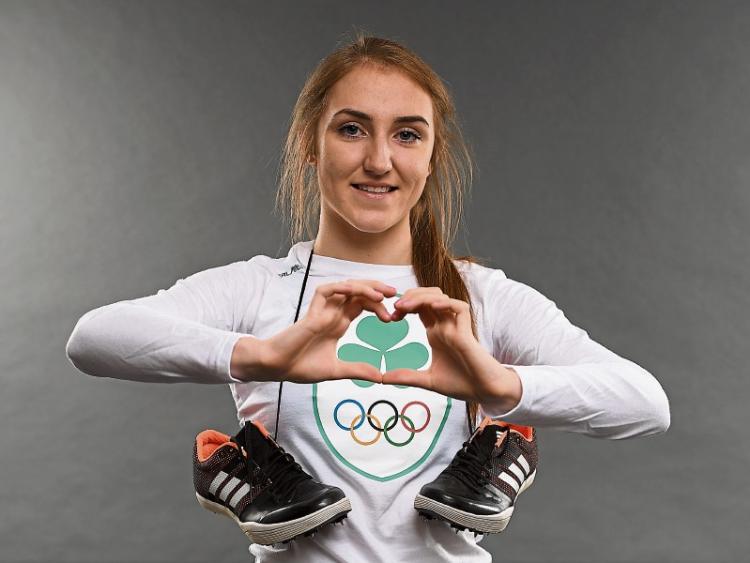 Sophie Meredith, winner of the Long Jump in Nenagh

The Adare 10k took place on Sunday last and over 700 athletes took part in this sell out event.

The field was strong with 5 athletes competing the course in 32 minutes and under. The winner of the race was Rory O’Connor of North Cork AC followed by Séan O’Hehir Rathfarnham AC with Alan O’Shea of Bantry AC in third. The first Limerick runner home was Declan Moore of Bilboa AC in 5th place.

Nenagh Olympic Stadium was the venue for the Munster juvenile finals held over two days on Saturday, 23 and 24 February. The number of entries increased significantly this year and Limerick was no exception with over 135 athletes from Limerick clubs taking part in sprints, middle distance, throws, jumps and walks.

In the U-12 600m race, Abby Yelverton of Limerick AC won gold. It was also gold for Orla O’Shaughnessy of Dooneen in the U-13 final with Vivienne Amaeze also of Dooneen in third.

The U-17 200m girls’ final saw Sally Dickson win silver. IN the U-18 final, Niamh Foley of St Mary’s was first with Helene Dee of Dooneen in fourth. Adeyenio Tomiwa of Emerald was third in the U-19 200m final.

In the U-13 girls’final, Vivienne Amaeze was second. Marc O’Brien of Dooneen won the U-13 final. The U-14 final saw three Dooneen athletes come fourth, fifth and sixth - Angel Alfred, Leagh Moloney and Yanna Leahy all of Dooneen.

The U-14 boys’ final also saw 3 athletes from Dooneen come second, third and fifth. They were Dennis Matthews, Jayden Carmody and Josh Boland. Debbie Lawel of Dooneen was fourth in the U-15 final and Harry Condon of Bilboa was second in the boys final.

Laura Frawley of St Mary’s was second in the U-16 final with Emma Moroney of the same club in fourth.

Sally Dickson of Dooneen was second in the U-17 final, Tessy Lawel third in the boys’ final.

The U-18 final saw three Limerick athletes compete with Dior Lawel of Dooneen in second, Rory Clothier and Brady Finn of Emerald in fourth and fifth. Lauren O’Leary of Emerald won the U-19 title with Sophie Meredith in second.