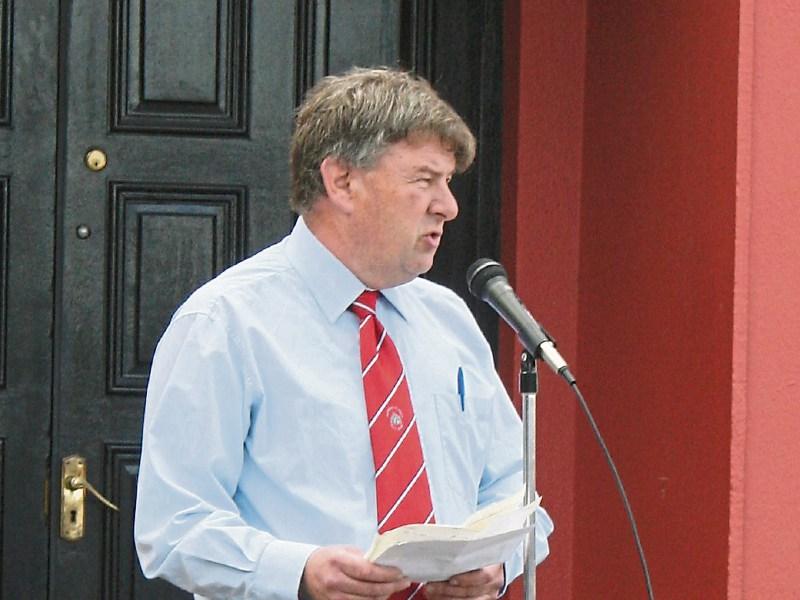 The term ‘GAA to the core’ is something we hear now and again but such a term could well have been written to describe Anthony McGann who sadly passed away in recent weeks.

The GAA was part and parcel of his life, the value of club and community meant a great deal to him and on every occasion he took full advantage of putting his club and county forward.

Anthony McGann had many qualities but chief amongst them was his honesty. If he had something to say it would be said.

He was a man of great integrity and won the respect of all those that came in contact with him. He had great energy and drive and also had a way of getting the best from those around him.

Such qualities saw him deliver on many projects but one that he took great pride from was the building of the GAA club house and community centre in Mungret.

He represented his club Mungret with such passion. He was a man that saw the value of community and pride of place was really important to him.

I first came across Anthony McGann at County Board meetings. I could see very early on that he was his own man, he didn’t follow, instead he had the courage to ask questions.

The GAA was part of every fibre of his body, he grew up knowing just how much it meant and how it brought entire parishes together. He was a player, an administrator but most of all he was someone that wanted to get things done.

For as much as he took pride in seeing his own club doing well he was equally happy to support other club teams from Limerick in the Munster club. To him they were representing Limerick and they deserved support.

His funeral saw hundreds turn out to pay their respects. He left a mark with many and from all parts of Munster they travelled to acknowledge the fine contribution he made at various levels.

Mungret and Ballybrown are great rivals on the field but this was a time when both clubs stood shoulder to shoulder.

It was the biggest guard of honour I have ever seen. Anthony played a part in both clubs and his son Adrian also plays with Ballybrown.

We now live in an era when clubs find it particularly difficult to get young people involved but that could never be said of Anthony McGann. He won a minor county title with the club in 1975 and ten years later he was Chairman of the club. Two years later the club house combining the community centre was opened. He was part of a great group of people that laboured hard but he played a key role in getting the best from the team.

It didn’t matter to whether it was club, City Board or any other of the various organisations he was involved with. They all got the same loyalty and honesty. To Anthony McGann it was all about playing your part and in his case that was something he did freely.

As Chairman of Mungret GAA club Mike O’Connell has known Anthony McGann all his life.

He saw at every level the difference he made, “Anthony was a unique man. From as long as I can remember he was involved as player, administrator but most of all, I will remember him as a man that worked very hard for the club and the community at large.

“He took huge pride in Mungret and as young Chairman he was part of team that delivered on a project that has played a central role for all of the community in Mungret. There was talk around that time of building a prefab unit but Anthony was very strongly against this. As Chairman he had the vision and what transpired as a result was a massive community effort where the club house and community centre was build by volunteers at night.”

According to O’Connell the key word in describing Anthony McGann was respect,

“Anthony was respected by all, he gave respect and he got it. He was someone that was always ready to help people. It didn’t matter who they were. To him it was about doing the right thing. He was a solid man that was committed to doing his best for his family and community. He was a natural leader, at sixteen he was involved with juvenile teams in Mungret.

“He was always involved in some shape or other. He was a man of his word, someone that took huge pride in his life long membership of the Pioneer Association. He was Chairman of the Pastoral Council of Ballybrown and Patrickswell. He had only one ambition and that was to play his part and leave things better than he got them.

“We all strive to do the same but Anthony succeeded. He went to live in the parish of Ballybrown and while Mungret was his native place de was delighted to help the club and see his son play with Ballybrown. We will miss him greatly, he left many footprints in Mungret GAA and generations of people will benefit from his efforts and of those around him at that time.”

One of the great qualities Anthony McGann showed during his illness was his courage to continue to contribute.

He did this in many ways but especially when as manager of Atlantic Aviation Group Inter firm team. Richard Dorgan explains,

“Anthony was ill but he never allowed it come in the way of the teams preparations. He showed unbelievable courage, his passion was infectious. He spoke at our celebrations of how managing the team kept him going but it worked both ways. Everyone that got to know Anthony McGann became his friend, that was his personality.

“He had so many qualities but one that I will always remember was how he encouraged people. Watching Limerick win the All-Ireland after such a long time made him a very happy man. His last time watching Limerick play was the league game which they won against Tipperary. Anthony was a true gentleman in every sense of the word and he will be greatly missed by all of his work colleagues.”

In the course of life we learn many lessons, we will meet many people, some will challenge you and others follow the leader.

Anthony McGann was never afraid to challenge and ask questions. He was also a leader that won the respect of all that he came in contact with.

To his wife Mary and family I offer my sincere sympathies at this very difficult time for them.

Last week Feohanagh and Limerick GAA lost one of its greatest workers and supporters. Pat O’Brien passed away and next week I will recall his outstanding contribution to his club.