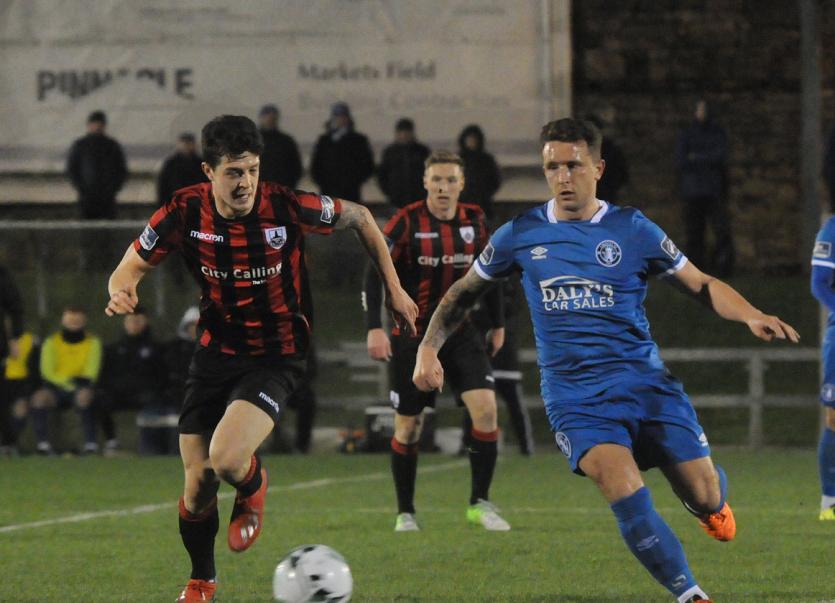 Action from tonight's game at the Markets Field

As shaky as their pre-season was, Limerick FC weren’t without turbulence before the big kick-off.

Limerick anticipated that Killian Brouder would start this game, but he was a late omission from the squad and he struggled to shake off a knock he had coming into this one. William Fitzgerald also missed out due to a hamstring strain.

As is always the case under Tommy Barrett, his side lined out with a midfield three – this time, consisting of Jason Hughes, Darren Murphy and Sean McSweeney.

Shane Tracy operated at left back, while Sean Russell started wide left and showed some deft touches in the early stages.

But on a night where the crowd was strong, so was the wind and this hampered the home side for the opening 45.

Their best opportunity would be hard to pick out, but Longford’s wasn’t.

After some tidy build-up in midfield featuring former Limerick favourite Paul O’Conor, winger Adam Evans tucked infield and unleashed a ferocious shot goalwards. Jack Brady did well to track the flight of the ball, before tipping over the bar.

The home side were a lot better in the second half, but they’ll be rueing a big chance spurned by Karl O’Sullivan.

After a clever switch of play, Sean McSweeney won a flick-on and set O’Sullivan in on goal. He took a good touch to set himself. But as the crowd rose to celebrate the opener, they belatedly realised that the young winner only found the side-netting.

A point was probably a fair result, but a couple of late scares survived may leave Tommy Barrett feeling happier with a point than Neale Fenn.