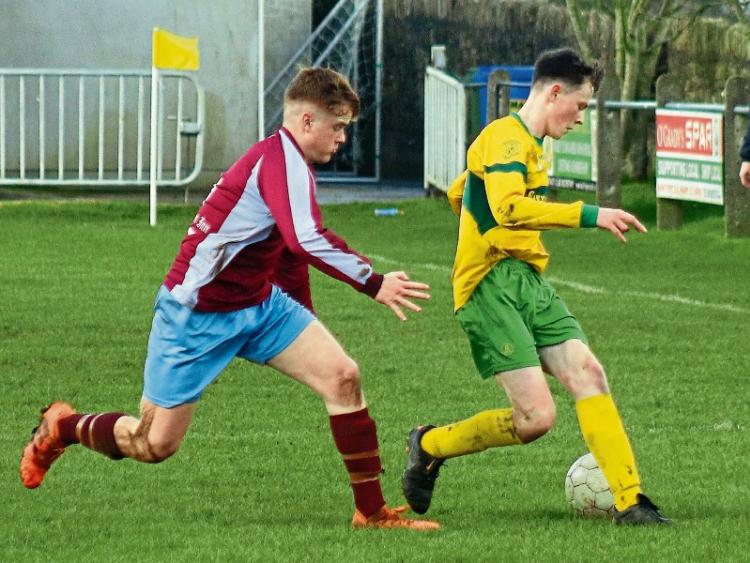 Broadford United will be attempting to reach the heady heights of the Munster Youths Cup semi-finals when they play Charleville away in the quarter-finals on Saturday night at 7 pm.

The tie represents a tough challenge for Broadford but no tougher than the 4th round in which the Limerick Desmond League’s representatives came from 2-0 down after 20 minutes away to Clonmel Town, winners of the competition in 2015 and 2016, to win 4-2. The aerial prowess of James Molyneaux proved crucial in the victory, his two headers completing the comeback after goals from Colm Ryan and Kieran O’Flynn had brought Broadford level.

To progress on Saturday, its’s vital that centre-half Molyneaux and his fellow defenders, along with goalkeeper Brian Stack, don’t give the same head start as they did to Clonmel, something that I’m sure the management team of Patrick Stack (older brother of Brian and Senior Steward of the Stack Goalkeepers Fraternity), Micheal Brosnan and Ray Keane will have drilled into their charges at this stage. Ryan and O’Flynn will hope to get among the goals again or, equally importantly for midfielders, join Ciaran O’Sullivan, TJ Kelly and Conor Stack in creating chances for each other and striker Jamie Keane.

Having won the Youths League and Cup double with much the same panel last season, this is clearly a special bunch of players that Broadford have but the same could be said for Charleville, who won the u-17 Division 2 League and Cup double in Limerick District last season and have built up a great bond over the seven or so years that they have been playing together. They won’t win Youths Division 1 this season as they are well adrift of the top two, Regional United and Aisling Annacotty.

The game will be played on Charleville’s all-weather pitch but the surface shouldn’t prove to be a problem for Broadford, who have been training in the Adare all-weather in recent weeks. Charleville have already lost to a Limerick Desmond League side this season, beaten 1-0 away to Ballingarry in the 3rd round of the FAI Youth Cup on the first of December. I expect this game to be equally close and I give Broadford, who report a clean bill of health, the vote to come out on top.

There are three Desmond Cup ties on Sunday, one in the first round and two in the second round.

The prize up for grabs here is a home tie against Glin Rovers in the second round. League form suggest a narrow victory for Pallaskenry, who won 1-0 away to Broadford United Reserves in the league and are three points better off in the Division 2 table.

The League stats of Breska and Askeaton are remarkably similar. Both occupy fourth place in their respective Divisions, with an accumulation of nineteen points from eleven games. Breska’s higher division status and the fact that they were able to win at home to fellow Division 1 side, Shannonside, in the first round sways me towards giving them the vote.

Both of these teams are having a good season. St. Ita’s are challenging for the Division 2 title and won 6-0 at home to Feenagh in the first round. AK United are through to the Riedy Cup Final and are in a strong position to be crowned Division 1 Champions.