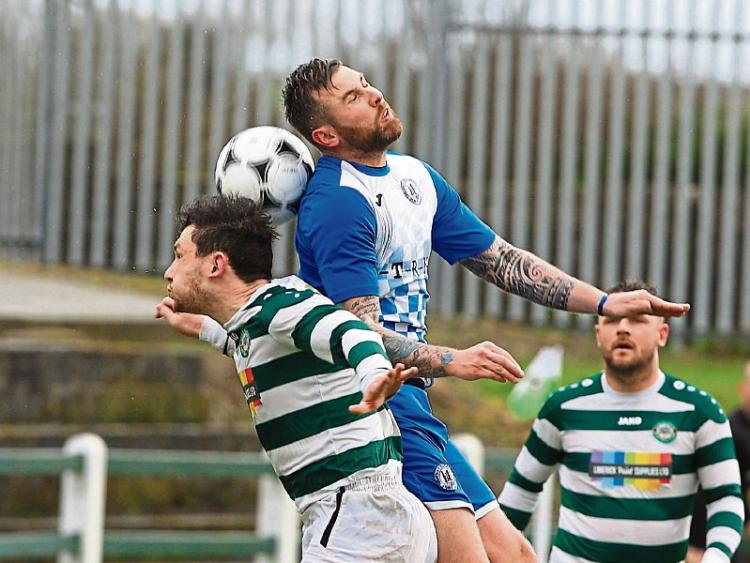 Pike Rovers Colin Daly and Hibernians Clive Prendergast clash for the high ball during their Munster Junior Cup tie last weekend. It is back to League action this weekend for all clubs

With a full program of League fixtures this week, it gives local soccer clubs a chance to catch their breath after the slew of cup fare over the last couple of weeks.

As usual, the focus will be on the top flight where a number of crucial ties are scheduled.

Pike come into the tie on the back of a 3-1 victory over Hibernians of Waterford. In Contrast Regional fell to a rare defeat going down 1-0 to Clare kingpins Newmarket Celtic.

Pike fought back from a goal deficit to win the tie with two second half goals.

The form of Steven McGann and Colin Daly will have please manager Mike Shiel while Jonathan Grant chalked up his 40th goal of the season in all competitions.

The win was achieved without the services of Pat Mullins and Wayne Colbert while Eoin Hanrahan was only used from half time. You imagine Pike will need a full side on Sunday to cope with a Regional side full of confidence.

Shane O'Donoghue and Tom O'Connell have done a superb job with the side this season and hopes are high that their form could bring silverware to the club this season.

Jack Lynch has settled into the side seamlessly and has toughened up their defence. How he copes with the top scorer in the Leagues, Jonathan Grant, may well decide the outcome of this one.

Last Sunday they struggled early on against Nenagh before breaking away to win 3-0. They will have Shane Clarke back in the side this weekend which in itself gives them the advantage.

Kevin Barry and Keith Mawdsley shared the goals last Sunday and when you throw in the Decades top scorer, the League Champions have a potent looking strike force.

Fairview were unlucky to go out of the Tuohy Cup to Pike Rovers in their last outing but they did show a great fighting spirit to haul themselves back into the tie having fallen two goals behind.

They have a good side and will put up a good test for Janesboro but whether they have the ability to contain them is in question.

Two sides on the crest of good cup runs meet when Aisling Annacotty host Ballynanty Rovers. The ‘Blues’ have not given up on their slim chance of pipping Pike and Janesboro for the title so they will be keen to keep their run going. Aisling are rock solid in mid table and focusing on their cup runs which might give the visitors a slight edge.

The County side are uncomfortably close to the drop zone and badly need to get a few extra points on board.

Charleville's win over Prospect last Sunday has given the Cork sie renewed hope of survival and this weekend they would be hopeful to add further to their tally this weekend when they host Nenagh and below them Carew Park take on Prospect Priory more in hope than anticipation.

Charleville are in Munster Youth Cup action when they host Broadford looking for a place in the semi finals of the tournament.

The promotion race in Galtee Fuels Division 1A is turning into a thrilling affair with at least five teams in serious contention.

Coonagh’s one point lead could be tested by a Fairview Rgs side who are still in the hunt for the title. Coonagh Utd had a couple of defeats in their last two games so will be keen to halt the slide.

Mungret, a point behind the leaders meet Summerville while Athlunkard Villa make the short trip to Corbally Utd.

Tonight (Wednesday) the Div 1A O’Halloran Cup continues with Athlunkard Villa taking on Coonagh Utd in Jackman Park at 7.00pm