Opinion: The display by Limerick will have sent message - Martin Kiely 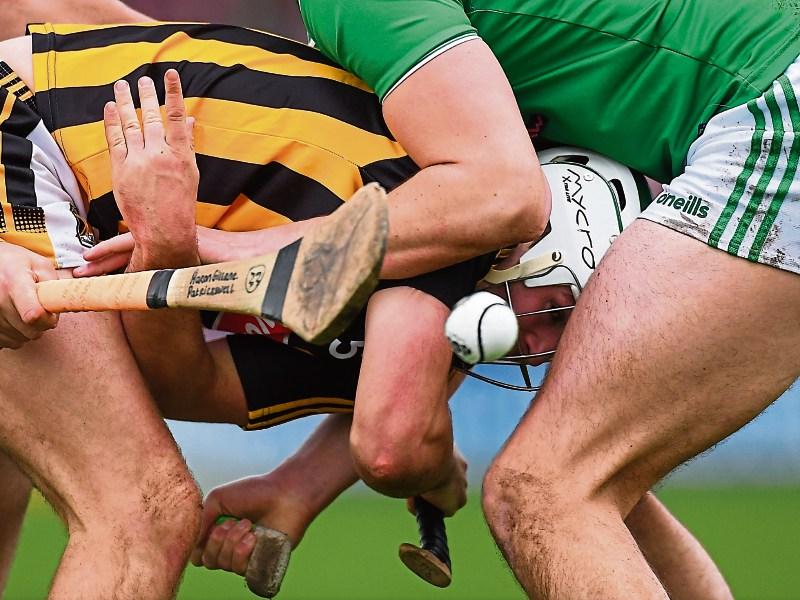 Pádraig Walsh of Kilkenny looks for the sliotar as he is tackled by Kyle Hayes of Limerick. The win over the ‘Cats’ has sent a message to all that Limerick are not to be underestimated

Limerick sent a signal to the country last Sunday in Nowlan Park when they produced a performance, particularly in the second half, that blew Kilkenny away.

That very rarely happens and few, if any teams, leave with a nine point winning margin.

The performance had so much to be happy about. Limerick were clinical, they worked really hard and at times played precision hurling that had Kilkenny chasing shadows.

It was a close enough game up to when Limerick got those brace of goals but there was no chance Kilkenny could find a way back when Limerick threw over some great points both before and immediately after the break.

At one stage Limerick led by thirteen points as Kilkenny were unable to cope with the slick passing out of defence and the quality ball into the forwards.

It was Limerick's first win in Nowlan Park in twenty two years, this was worth waiting for. They took Brian Cody’s men apart and in fact they were pulling up nearing the end.

The quality on display from Limerick will have sent a message to many. Jackie Tyrell said in the lead up to the game that Limerick wouldn’t be in the top three and the reply from Limerick tells its own story.

John Kiely is around long enough to know that this win will have little consequence come championship.

He will also know that Kilkenny are not the team they once were. The days are long gone when Kilkenny had a forward line that would hurt you badly.

Walter Walsh was the only standout player that delivered of the starting six that took the field on Sunday.

That win was great and it may well have laid a marker but it comes with caution and a health warning. Kilkenny lacked shape all over the field, they are missing some well known players but so were Limerick.

Limerick are enjoying their hurling, they are now showing signs of a team that are really starting to express themselves. Limerick got lots of space in this game. The half forwards went deep and surprisingly the Kilkenny defenders followed them. That left acres of space, particularly for Aaron Gillane, who was in sparkling form once again. He finished with 0-9 and add that to the 1-12 he scored during the week for Mary I and it confirms right now he’s enjoying a golden spell.

The league so far has seen Limerick with a 100% return. They have mixed it up and some players are getting opportunities. The strength of the panel is really starting to come to the fore now and we can see that many of these young players are growing with the challenge.

When Kilkenny were at their best they had the same luxury and it appears Limerick have a lot of similarities at this point in time.

One man that has given great service to Limerick is Tom Condon and he let it be known on Sunday that he is not happy with a minority role.

He was in superb form, he scored, he passed, he encouraged and he cut a dash through the centre on a couple of occasions.

Dan Morrissey was commanding at centre back and didn’t give an inch. Diarmuid Brynes was equally on form while Paddy O’Loughlin tasted the experience of playing in Nowlan Park in a Division 1A game.

The backs as a unit moved with pace and their inter play resulted in quality ball to the forwards.

The first half was a close and tight affair and Kilkenny gave as good as they got until Shane Dowling and Conor Boylan hit the net.

Everything that Gillane touched created scores for himself or others. He had the Kilkenny full backline in knots and he was greatly helped by the quality ball he received and the space created by his half forward line.

A nine point lead at the break was followed by early points from Gillane and Barry Murphy. The score by Murphy was magnificent, the hook on was pure magic and the finish was even better. Brother Dormer who played such a great part in the development of many young hurlers in Doon would have been very proud of it.

One of the pleasing aspects from the game was the attitude of Limerick. They showed a great willingness to drive on in the second half. By the third quarter they had extinguished any hope of a Kilkenny come back when they led 2-16 to 0-8. From this point on they hurled with reduced momentum as Kilkenny landed a few scores nearing the end.

When you look at the players Limerick could bring in it tells you the sort of players we now can call upon.

Limerick have all but secured safe passage to the knock out stages of the National League now and they can further experiment for the two remaining games if they wish.

Cork will come to the Gaelic Grounds next Sunday and Limerick travel to Ennis for the last game.

John Meyler, the Cork manager, was in Kilkenny last Sunday. His side had their first win in the league against Clare in what was a poor game of hurling.

Clare enjoyed so much possession and still somehow lost the game. The new format whereby no team will be relegated will see some mind games played and for that reason some results at this time of year need to be taken with a great degree of caution.

I know both Tipperary and Cork are working very hard in training and they have not reduced their schedule during the league.

John Kiely will have a very clear focus, he will know where he wants his team to be and will not dwell for long on what others are doing.

The only thing he can control is what goes on in his own camp and it’s very clear he has his team buzzing at the moment.

I am sure that other teams will bring a serious challenge as the year progresses and John Kiely will be very aware of that. For now it’s all about jumping the fences that are presented.

The level of consistency that Limerick are showing is outstanding. It’s a very special time for Limerick supporters and every opportunity must be taken to support the team.

We have endured many difficult days as a county and it’s great to see our young players produce the sort of displays we have witnessed in recent times.

They are playing with a focus that will be rewarded and how they have carried themselves as All Ireland champions has won them huge respect throughout the entire country. They are a level headed bunch of players that are benefited from a culture created by a strong management team.

Finally, Mungret and Limerick GAA lost one of its finest last week. Anthony McGann gave outstanding service and I will pay tribute to him next week.