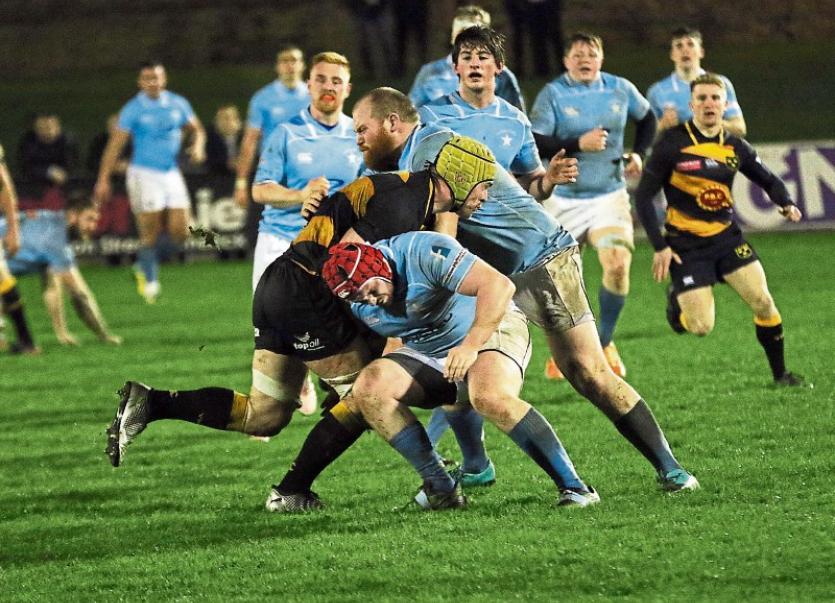 Action from Young Munster and Garryowen during the Charity Cup final

THE ‘Friday Nights Lights’ meeting of local rivals Young Munster and Garryowen at Clifford Park, 8pm, is the highlight of another action-packed weekend of All-Ireland League action.

Both clubs will be desperate for the points on Friday, but for different reasons as fourth-placed Garryowen continue their pursuit of a top four play-off place, while their hosts Young Munster will be anxious to record a much needed win in order to boost their survival hopes.

Also in Division 1A, on Saturday, seventh-placed Shannon host Dublin University on the back pitch at Thomond Park, 2.30pm.

Shannon will be looking to bounce back to winning ways after their heavy defeat to high-flying Lansdowne in Dublin last weekend.

Meanwhile, in Division 2A, both Old Crescent and UL-Bohemian will look to build on excellent wins.

Promotion-chasing UL-Bohs, currently fourth in the table, make the long journey to take on Queen’s University Belfast, who sit one spot below the Red, Red Robins in the table, at 2.30pm on Saturday.

Old Crescent, who scored a narrow victory over Nenagh Ormond in their most recent outing, entertain basement side Galwegians at Rosbrien in another key fixture.

Bruff, with eight wins from their dozen fixtures, are third in the table, two points clear of fourth-placed Omagh.

Should Glenstal overcome Bandon, they will face PBC in an attractive semi-final tie on Wednesday, March 6, 2pm.