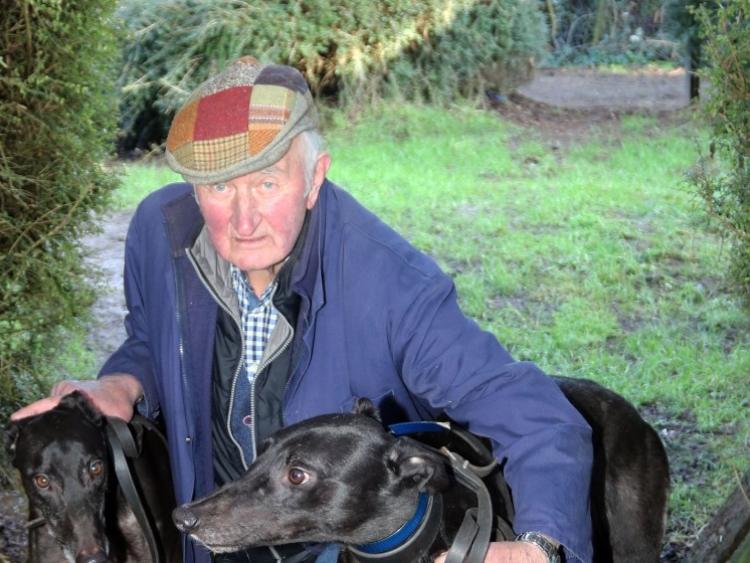 Limerick greyhound trainer Denis O'Malley shows no signs of slowing down after more than 65 years in the industry.

The veteran handler, who will turn 82 years old in June, still races greyhounds twice a week at Limerick Greyhound Stadium, operating out of his kennels in Drombanna.

He currently has nine dogs in training, including Clearly Written, who was 4th in the €65,000 Laurels in Cork last summer. He continues to experience success on the track, having won the Limerick and Clare Greyhound Owners and Breeders Association ‘Public Trainer of the Year’ award in 2014, 2015 and 2016. Denis is also a distant relative of former Limerick political heavyweights Donogh and Desmond O’ Malley.

Denis says it’s been the social side of the sport that has kept him involved for so long:

“I love meeting the owners I’ve worked with down through the years. It’s one of the greatest rewards I get in the game, talking with happy punters, people I’ve known for 30 years because of greyhound racing. My advice to any young person wanting to get involved would be to start off by getting into a syndicate, get ten people in there, and you all will get a kick out of it. It’s not expensive to train a greyhound. Owners get such enjoyment out of syndicates.”

Denis has plenty of fond memories looking back on his career, including at the old Markets Field track in Limerick.

“The Markets Field was a great venue,” he says. “It was a part of the culture, it was an outlet for people to have a greyhound. I got plenty of wins there too. I think it is opening up again now, we have the facilities in Limerick to really get it rolling again. It’s very easy to get there from any part of Munster. Greyhound racing is evolving, we’re in the digital age. They have a good team now in Limerick.”

Other notable dogs in the O’Malley kennels include nine-time winner Farrihy Flyer and four-time winning two-year-old Airfield Heir. He says retirement hasn’t come into his thinking at any stage.

“I’m not retired and I’m not tired either, thank God! I’ve plenty of energy, so there’s no point in retiring. It’s a different world, and you have to go forward with it.” he concluded.