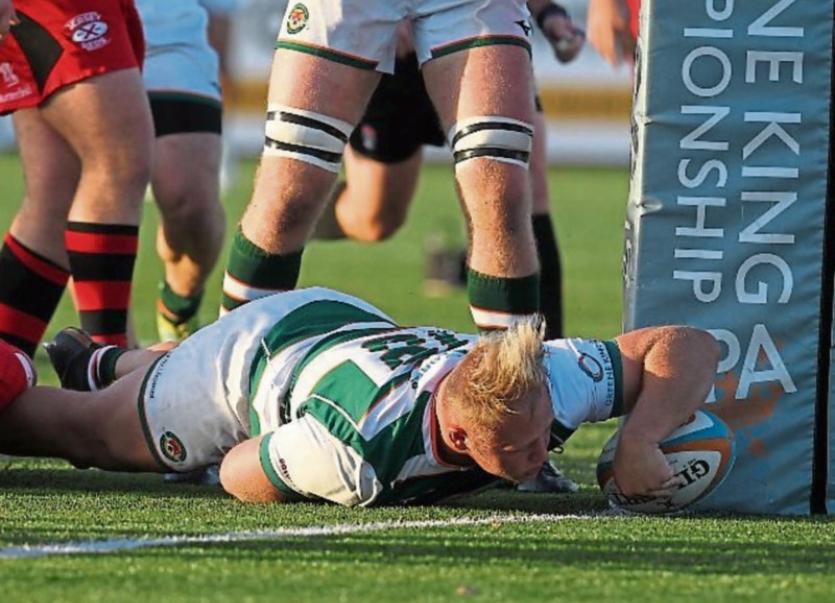 Betts crosses for a try against the Jersey Reds

Betts started his rugby playing career with Estuary RFC at the age of eight before moving to Young Munster where he spent eight seasons.

A dynamic front row forward, Betts was starting tighthead prop for the Ireland U-20s side in their march to the Junior World Championship final in 2016.

He played for Munster at youth, under-19 and under-20 levels and gained two caps for Ireland Under-19s before progressing to the Under-20s.

A member of the Munster sub-academy in the 2015/2016 season, he wasn't offered a place in the academy the following season which opened the door for English giants Leicester Tigers to table an offer. Betts made his senior debut for Leicester in their Anglo-Welsh Cup fixture against Northampton Saints at Welford Road in January 2017.

The West Limerick man continued his rugby development when spending a month with the University of Sydney in May 2017 before returning to Tigers in time for pre-season training. Last summer Betts, who played Heineken Champions Cup rugby with Leicester, joined English Championship high-flyers Ealing Trailfinders, currently second to leaders London Irish in the Championship. He spoke this week about how his career has progressed since leaving Munster.

Did the disappointment of not progressing to the Munster Academy give you extra drive to succeed elsewhere?

Ben Betts: “Yes, of course I was obviously disappointed at first, but when the new opportunity came around I was excited and nearly tried to forget about everything else and just focus on the future.”

Do young players just take disappointments such as that on the chin more nowadays and look to progress elsewhere?

“One hundred percent. A lot of the boys at Munster knew that if you wanted to make it to the next level you had to make lots of sacrifices, do whatever it takes.

“On the other hand you see a lot of young boys move abroad playing in tier two of France and England still earning a good living and still chasing the dream.”

How excited were you by the chance to join a big club like Leicester?

“I was buzzing to get stuck in! Richard Cockerill was quite a character too, but we got along very well. He was very impressed with my work rate and willingness to do what it took to progress to the next level so he offered me another contract.

“Playing with Ireland at the U-20s world championship was amazing, everything I could of asked for and it certainly did help with the campaign we had, but it would of helped if we had beaten England in the final.”

What was it like making your first team debut at Leicester?

“Making my first team debut was breathtaking to say the least a sold out derby game against Northampton Saints in front of 20,000 fans, it was a brilliant introduction to first team rugby.”

What areas of your game you looked to improve on at Leicester?

“Leicester are always known to be big and strong up front, the club has a lot of history, players that helped me a lot were front row boys Marcus Ayerza, Dan Cole, Tom Youngs.

“Coaches that helped my development massively were Boris Stankovich and Richard Cockerill, in terms of set piece scrummaging with and against the boys helped me so much having British and Irish Lions alongside you in training really helped me with motivation.

“Tom Youngs was also very good to me he's such a nice man on and off the pitch.”

Geordan Murphy is now head coach at Leicester. Can Tigers bounce back to their former glory days?

“I was glad Geordan was given a chance at it, he's also a very nice man and it was great to have an Irish coach around when I joined as I could speak to him about anything.

“I certainly think he can bring them back to their best! They've got a good young bunch of players coming through.”

How did the summer loan at Sydney University come about?

“Basically Aaron Mauger was at Leicester at the time, it was just about the time where Dan Cole was back from injury and there was only a few games left in the season.

“I was dropped back to fourth choice (prop), so I asked Mauger what he would think about me heading to Sydney University for the rest of the campaign and within a short period of time he got back to me and said 'yes', he thought it was a great idea. I knew a few people in Sydney that’s where I got the link from.”

When and why did you decide to leave Leicester and join Ealing?

“It was around January time of last year, we were going through a tough period at Leicester and I didn't want to wait around to sign a contract as I can't deal with the stress of it personally, especially when there's no promises being made, its just 'ifs' and 'maybes', the move was for gametime and I have racked up 9 appearances this season at Ealing and I hope to try and push on for more later this season.”

How have you found playing in the Championship this season?

“It's certainly not an easy league for the front five, especially the props, coming up against a tough challenge every week no matter who you play. Everyone in the Championship wants the same thing, to progress to the next level.”

Limerick fans can keep track on Ben's progress by logging on to www.ealingtrailfinders.com