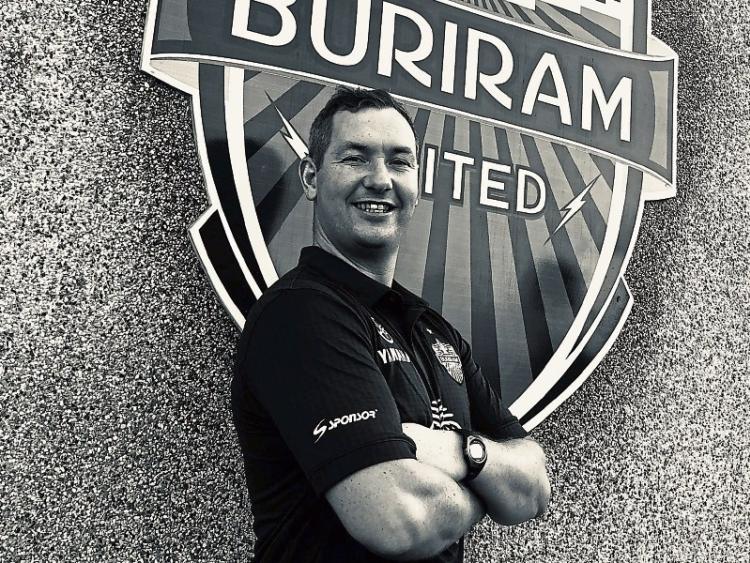 Derek McCarthy pictured at his new club in Thailand

TWELVE months ago Derek McCarthy came back from Jordan where he was working with their U23 side. We asked him, how long did it take to get the itch another adventure?

Derek McCarthy: “Luckily I wasn’t waiting long as by mid-February I’d received a phone call saying an opportunity with Shanghai SIPG in China would be starting in March.

In between roles, I feel it’s important to stay active coaching. My local club Kilmallock Utd provide that outlet allowing me to stay involved in the game between jobs.”

How did chance to spend the three months with Shanghai SIPG in China come about?

“Contacts are an essential part of the industry, and thankfully I’ve built an excellent relationship with Iain Brunskill, currently Head of the Academy at Ole Gunnar Solskjaer's Molde FC in Norway, who was asked to take Shanghai SIPG U21 squad during a six-week visit to St George’s Park, England.

“He was able to put his own backroom staff together which included former Liverpool FC academy coach and Japan assistant coach Stuart Gelling, former Manchester City goalkeeping coach, David Felgate and myself. It was an excellent group of staff with a wealth of experience.

“The team was followed by a camera crew from Transworld Sport documenting the whole experience and each week a five -minute slot on the programme was allocated to the experience and shown on Chinese TV. The contract also included an eight-week stint in Shanghai preparing for a four team tournament.”

Culturally, how did you find living in Shanghai?

“In Shanghai, we were based in a hotel at the academy’s training base which included a host of other elite sports and athletes. It was a great experience as it really immersed us in Chinese culture. Shanghai is a multicultural city with all the high street brands and shops/restaurants you would expect in somewhere like London or New York.”

What was your position with the team?

“My role was Sports Scientist working alongside a Welsh lad, Dan Cunningham. We were in charge of the general fitness of the players including the strength and conditioning programme, training and match day warm-ups, recovery sessions, GPS, injury prevention, nutrition and hydration.”

Was it difficult settling in to your new surrounds?

“Certainly seeing chicken feet on the dinner buffet took a bit of getting used to. If you are hungry enough, you’ll find something to your liking!

“During a week in Tokyo with the team, we were served snails, which were surprisingly delicious.

One of my key strengths in working aboard is my ability to adapt and fit in. I guess this is one of the reasons why I have been offered these opportunities.”

Football has grown hugely in terms of popularity in China?

“It's massive. China wants to be the best in everything and football is no different. I suppose the difficulty they have is trying to make up for the lack of history they have in the game.

It’s not as simple as throwing a load of money at it and hoping for success. China wants to host a World Cup but only when they feel they have a team that will do the country proud. At the moment they have Marcello Lippi as manager and Gus Hiddink as U-21s manager.”

Had you the opportunity to extend stay in China beyond the three months?

“Sadly no. Even though many different plans were discussed regarding the development of the group in the end once our contracts finished we returned home.”

How did the chance to work in Thailand come about?

“During my time at Jordan, I met an English coach, Andrew Ord, who was the manager of Bangladesh U23 national team.

“After that meeting we stayed in touch and when he was given the role of Head of Buriram United academy he got in touch offering me the position of Head of Academy Fitness. It was a big decision to make and took some serious consideration with me and my girlfriend, Aoife. So far, it feels like I've made the right choice.”

Where in Thailand are you based and what is your role with the club?

“The club is based around 300km northeast of Bangkok in Buriram. It’s a small city but is fast becoming the sporting city of Thailand.

“I suppose it's fitting considering I’m from Limerick. They had the motor GP in November, the Thailand marathon is here in February, a Formula 3 racing track and a football team that has won the Thailand league in five of the last six years.

“My role involves overseeing the Athletic development of all players in the academy from 10 -17 years of age. The standard is excellent. The players live full time at the academy, so we have a lot of contact hours.”

How long do you plan to spend in Thailand?

“My contract is until December 2020 which sounds like a long time away but with four months down already the time is flying by.

“I'm really enjoying it so far, and I managed to get to see one of the paradise islands with Aoife over Christmas.

“Long-term ambitions will always be to make a living from what I love doing in Ireland with a League of Ireland club or the FAI. At the moment it’s a case of getting work and as much experience as possible in whichever part of the world that is.”