'Wexford was the perfect start for Limerick' - Martin Kiely 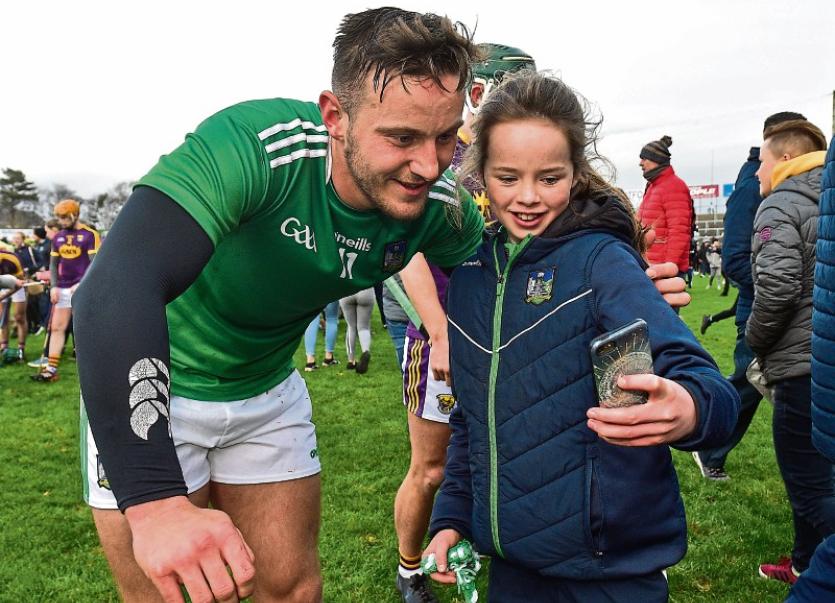 All smiles: 11 year old Shauna Quinlivan from Templeglantine, Co Limerick, with Tom Morrissey after the Allianz Hurling League Division 1A Round 1 match between Wexford and Limerick at Innovate Park

After eight years of absence from Division 1 A of the National Hurling League, Limerick returned with a fine opening win over Wexford last Sunday.

As I mentioned last week this is always a difficult venue and the home side played a very robust game.

Looking at the game on TV suggested there was a lot of off the ball stuff going on and Limerick showed great maturity to come away with their opening brace of points.

The attitude and application that Limerick showed last year was present and by any standards this was a fine win.

With only three weeks work done prior to this game it was very pleasing to see how the Limerick players coped with the sort of attention they got from Wexford.

This league will be good for Limerick and some players got good game time last Sunday. Colin Ryan had a fine game, Peter Casey gave an early signal that he wants a starting place. It took a good team effort to gain the points and like many times last year Gearoid Hegarty delivered a mighty performance.

Aaron Gillane was also in fine form and overall you would have to be very happy with how Limerick played.

The format for the National League will change next year but I get the sense every team will be trying particularly in those early games.

Teams will want to see where they are and as John Kiely said last Sunday, “nothing beats competitive games.”

Limerick started eleven of their All Ireland winning team against Wexford and the players that they introduced didn’t look out of place. That is Limerick's secret weapon this year. Player development is crucial and keeping the bench strong is what keeps momentum in a team.

It appears already that is the case and winning a starting place particularly in the forwards will be difficult. Having players on the bench that are match ready is what will make Limerick very difficult to beat.

While Wexford threw everything at Limerick but they still had the composure to withstand their efforts. The value of that win cannot be understated. It was the prefect start and one that sends many messages. Now, you will find mistakes and opportunities not taken but all of that will come right in the weeks ahead.

One of the most noticeable things I saw over the weekend was the level of conditioning on players.

Looking at Tipperary, Clare, Cork and Kilkenny shows they have a lot of work done. Of all the teams I was really impressed by Kilkenny. I have never seen a Kilkenny team is such shape this early in the year.

Brian Cody has found a few more players and while it’s early to be making predictions I see them as serious contenders in 2019.

They look like they have solved their full back problems with Huw Lawlor and that should see Padraig Walsh released to the half backline.

Players like John Donnelly, Billy Ryan and Richie Leahy were in sparking form.

In defence Tommy Walsh and Conor Delaney also look like they have the tools to survive at the highest level.

Tipperary under Liam Sheedy are already showing signs of major improvement. They took care of Clare with a good bit to spare and it will be a very interesting game against Limerick next Saturday night at the Gaelic Grounds.

Tipperary have put in some very heavy sessions over the past couple of months and the evidence of that can be seen in the players.

They showed physicality against Clare and the entire team showed massive energy levels. They worked really hard and were rewarded for their efforts.

Make no mistake about it Liam Sheedy will place a great emphasis on the league. That has been his style in the past. Such emphasis saw him build a team that won an All Ireland. Liam Sheedy sets high standards and it’s pretty clear at this early stage that his players are responding and like what they are seeing.

As Tipperary gear up for playing Limerick on Saturday evening you can be sure Liam Sheedy will want to gauge just where his players are, at this stage.

He will know what to expect from Limerick and you can be sure he will urge his charges to have a right go at them. Most team managers saw the energy Limerick had last year, they saw how they worked really hard all over the field and how they had freedom to move. We will see more of that from other teams this year.

The word from Tipperary supporters now is that they have a game plan, they are already showing signs of improvement. We should have a great understanding of where Tipperary are after they play Limerick.

It was refreshing to hear John Kiely state that they will be taking the league seriously and they want to keep on testing themselves, “get on with and win our games” was how he put it and by doing so he leaves no one in any doubt.

He expects his players to test themselves every day and his solid attitude has rubbed off on the players.

When Tipperary played last weekend the game changed when Tony Kelly got a straight red card but it can be said that Tipperary had inflicted heavy wounds before that incident.

I spoke to Brian Cody in Kilkenny last Sunday and it was interesting to hear him speak about the league,

“Look the league is about learning, it’s about finding new players and giving them the opportunity to express themselves. Championship does not allow that space, they have to get game time and the place to do that is in the league.

These games are really competitive and that’s great, that is how I like it. Trying to get a player through is not easy and it might take ten or twelve league games before he gets the confidence.” he concluded.

Of all the teams in the league and championship I think Limerick are the most settled. John Kiely knows well what he has, the age profile of the team is great and the most important thing is to keep the momentum within the squad.

This current Limerick team are in the arena of winners, that has only happened on a few occasions for Limerick players.

What keeps teams right is competition for places and it appears some will be challenged in a strong way this year.

I would expect to see a very big crowd at the Gaelic Grounds next Saturday night. I will not be surprised if the crowd exceeds 10,000. This game has appeal and while Limerick will want to win at home I do expect Tipperary to bring a really strong challenge. Home games hand teams an advantage and the Gaelic Grounds needs to become a fortress.

It says a lot about this team that they have got 2019 off to such a fine start.

They could easily have found a few excuses if they wanted but it was straight back to work when they returned from the holiday.

Winners don’t look or find excuses. They find reasons to win, they find ways to create a win.

Limerick have shown an early attitude that looks very promising and already the year looks like it could be a long one.