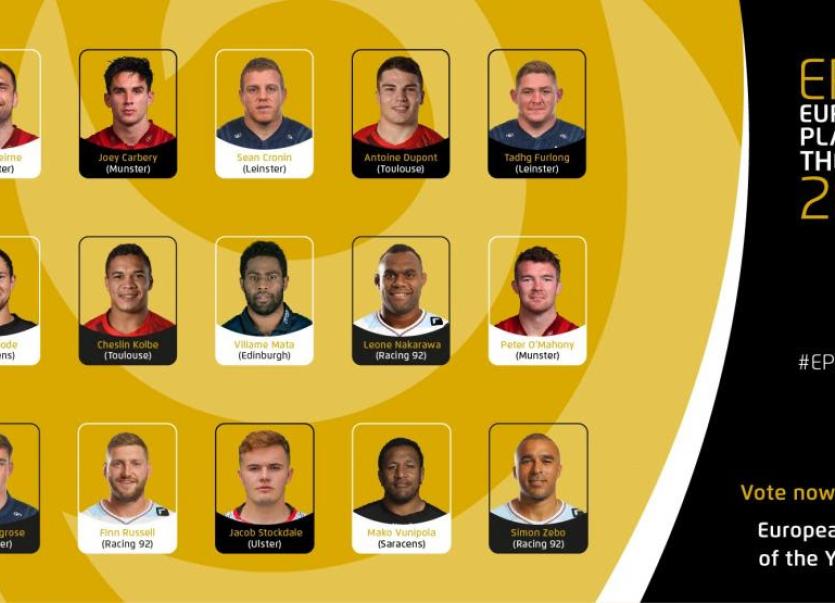 Elite players from seven different clubs and all three European professional leagues are among the 15 nominees for the prestigious EPCR European Player of the Year award. Munster's Peter O'Mahony, Joey Carbery and Tadhg Beirne are among the nominees, a just reward for the trio who have helped Munster top  their group this season.

Also on the list is Limerick native Sean Cronin of Leinster. The hooker ended the Pool stages as the joint top try scorer (6) alongside Jacob Stockdale, who is also nominated.

Last season’s winner, Leone Nakarawa, who played a key role in Racing 92’s qualification for the Heineken Champions Cup quarter-finals, is nominated once again along with his teammates, Finn Russell and Simon Zebo, while No 1 ranked, Saracens, have two representatives in Alex Goode and Mako Vunipola following their 100% record in yet another impressive pool stage performance.

Toulouse, who face Racing 92 in an intriguing all-French quarter-final at the end of March, have Antoine Dupont and the livewire, Cheslin Kolbe, in the list, and not surprisingly, Edinburgh Rugby’s, Viliame Mata, is included on the back of several outstanding displays during the pool stage.

The winner of one of the most prized individual accolades in the world game will receive a specially struck gold medal as well as the Anthony Foley Memorial Trophy.

The list will be reduced to five players in April following the Heineken Champions Cup semi-finals by a combination of the public vote and the verdict of the judges, and players who have not been included in initial list of 15, but who make a significant impact in a quarter-final or semi-final match, may be considered for the shortlist.

The voting will then re-open and the winner of the 2019 award will be announced following the Heineken Champions Cup final at St James’ Park on Saturday, 11 May.