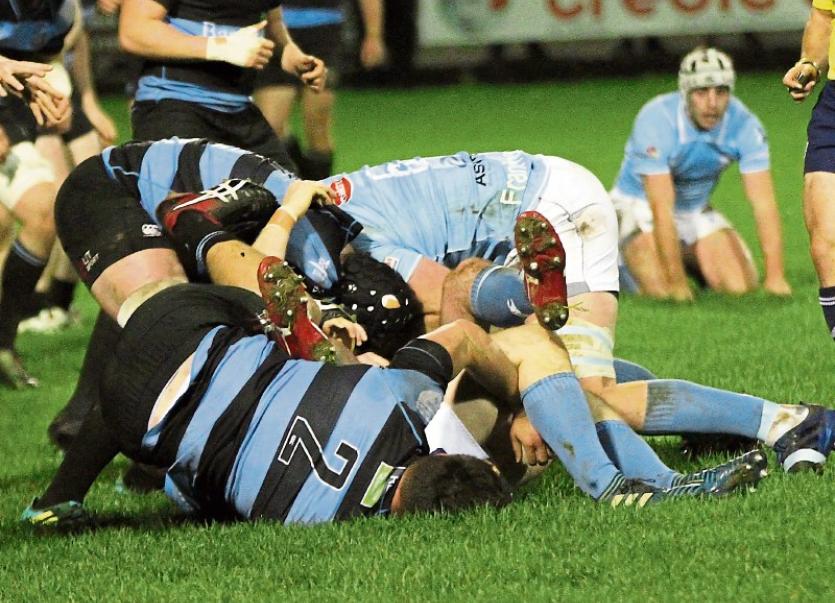 THE big derby meeting of Shannon and Garryowen at Thomond Park on Friday night (8pm) in Division 1A tops the bill of fare in the All-Ireland League this weekend.

Fourth-placed Garryowen currently enjoy a one-point lead over fifth-placed Shannon ahead of their crucial clash.

Garryowen saw their four-game winning run in Division 1A ended by UCC in a frustrating, narrow defeat at Dooradoyle on Saturday last. The defeat came on the back of an exciting Bateman Cup semi-final win for the ‘Light Blues’ over Lansdowne in Dooradoyle a week previous.

Garryowen’s meeting with Shannon at Dooradoyle last month ended in a thrilling 30-29 win for the home side.

Garryowen scored five tries in all, including a crucial late penalty try, to take a maximum five-point haul from the game, while Shannon, who had led 29-18 at one stage inside the final quarter, had to be satisfied with taking two bonus points from the tie as the Parish side also scored four tries of their own.

Munsters’ resumed their programme of league fixtures with a narrow defeat to Clontarf in Castle Avenue on Saturday last. The Greenfields side has not managed to win any of their seven most recent AIL 1A fixtures, with one draw and six defeats in that run.

Con are five points clear of second-placed Lansdowne in the table, while the Leesiders enjoy a significant 28-point advantage over the hosts on Saturday, Young Munster.

In Division 2A on Saturday, Old Crescent, fresh from their derby win over UL-Bohs, host Blackrock College at Rosbrien. Fourth-placed UL-Bohs face a trip to Dolphin.

Old Crescent had lost their two previous games prior to Friday’s runaway win in UL. The Rosbrien side had trailed 3-10 at half-time, but grabbed four second half tries through a sensational solo effort from Val McDermott, a penalty try and two more five-pointers from Ronan McKenna and the vastly experienced Brian Tuohy.

UL-Bohs had won three of their four most recent games prior to last Friday night’s heavy defeat to Crescent.

Meawhile, in Division 2C, Thomond, boosted by their derby win over Bruff on Friday night, travel to Tullamore, while fourth-placed Bruff host Malahide at Kilballyowen Park. All games 2.30pm.