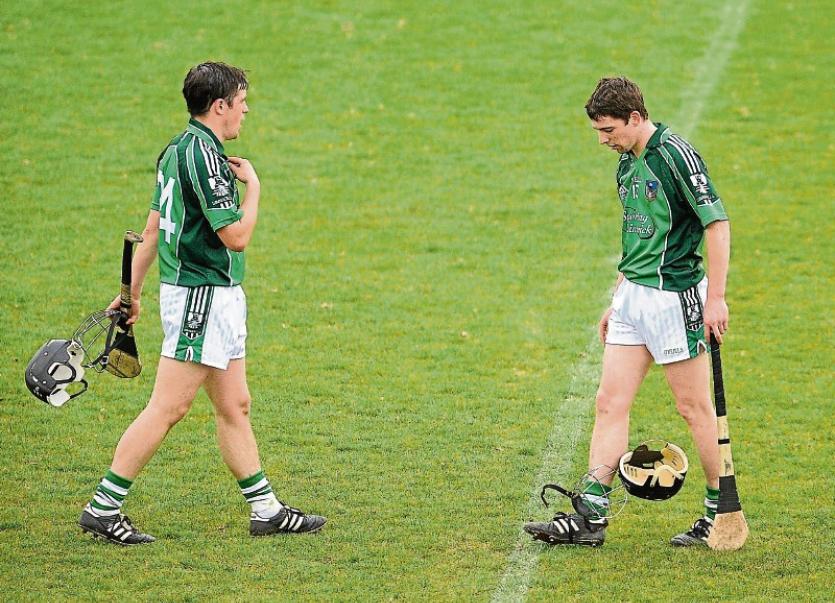 Back in the big time: Dejected Limerick players Sean Herlihy, left, and Graeme Mulcahy after the Allianz GAA Hurling National League Round 7 tie versus Dublin in 2010, the last time Limerick played 1A

August 19 seems a long time ago now. The All Ireland win has sustained us and now at the midwinter stage the hurling year of 2019 is about to take off once again.

This weekend Limerick will travel to Wexford for their opening game and also a return to Division 1 of the Allianz Hurling League.

The journey has been a difficult one and finally it is great to see Limerick back in the top flight.

I am sure Limerick will be greeted with the traditional guard of honour by Wexford but that is where the welcome ends.

Davy Fitzgerald will have his team hopping for this game. He will target a win here and I get the feeling there will be a cutting edge to this encounter.

Winners have an option, they can be happy with what they have or challenge themselves to an even higher level. That is what faces the Limerick senior hurlers now.

Only they can answer those questions but we will all have a better idea before the National League ends. Limerick will have about six training sessions under their belts before this game whereas Wexford will be fine tuned for a game that will see sparks fly.

Limerick are a good five weeks behind other teams and recent All-Ireland winners have found it difficult to make up that ground.

John Kiely will push his team for a result in Wexford Park. Traditionally it has been a difficult venue for Limerick and I don’t expect any different on Sunday.

Limerick will remember two years ago and that might be a spur to them this time round. Games will be coming fast and results will be important.

Limerick have Tipperary the following week under lights at the Gaelic Grounds. I think we are looking at a crowd of around 10,000 plus at that game. The level of interest is also high for the Wexford match with many supporters traveling down the night before.

We saw last year what a good start can do for a team and John Kiely will want to keep that winning feeling. He must also use the league to find cover for defence and the overall development of the bench.

The formula for last year will not work this year. To win again, players need to be seriously challenged for their positions and in that regard players on the subs bench now need to stand up when they get their chance. They are the ones that will drive the team in 2019.

If for one moment a player feels his position is secure then the chances of success will have greatly diminished. It’s about working harder than last year, it’s about running at a pace well beyond comfort. It’s about expressing the confidence an All Ireland win brings.

Limerick have the capacity to drive on. They have the age profile and power that will make them very difficult to beat. For players and supporters it’s about forgetting last year and the joy that it brought because the longer we look back the harder it will be to go forward.

One word that I have heard managers and coaches using a lot in recent months is strategy.

They were all talking about the demands that the new championship format has brought and how a high tempo league feeds into that.

From a Limerick point of view what do they want from the National League?

There is a level of risk in not going full out for the league and what we have seen over the past couple of years that once teams are on safe ground they try out players.

The league format is due to change next year so that might take away much of the pressure. The league was once a platform for player development but is all the more difficult now with winning and status so important.

Player welfare was a word used by the GPA a good bit one time. I don’t hear them saying it much now when players virtually have no time off.

Players now are switched on ten months of the year. The age profile of players is dropping and soon twenty eight will be the new number to retire at.

Players like David Reidy, Colin Ryan, Pat Ryan and Peter Casey will want to win a starting place in 2019.

They have shown they have the tools to survive at this level and this is a big year for them. Reidy has developed well, likewise Colin Ryan who was very impressive when Limerick played Tipperary in mid December.

He has the capacity to be a great player and his hurling is very good. He should view this year as the one that sees him take the next step.

A step that will ensure him a starting place. It takes more than hurling ability to be a good county player. It’s about the entire package and making sure you do a lot of small things in life well.

Pat Ryan has done well off the bench when introduced and he too must feel he is ready to challenge for starting place in the forward line. The same can be said of Peter Casey.

Both of these players have the challenge of taking out starting forwards from last year.

To win you have to express nearly all of the tools in your box. Limerick did that last year. You can be sure that while Limerick were celebrating other managers and stats people were trawling through their games for small nuggets.

Now, I am not so sure how beneficial that will be because they are looking at the past and not the present. Limerick have more to offer. I think many players still have much more to give and I hope we see lots more from them in the year ahead.

Limerick brought huge energy to their games last year. They worked really hard and their capacity to cover ground was spectacular. Other teams will match them in that regard this year. They will not be allowed space without attention.

Already I can see team selections altered so as to have players with huge mobility in the right places. One of the key ingredients in Limerick last year was the ability of the forwards, particularly the half forward line, to cover deep in defence.

It took teams a long time to come to terms with and in reality they didn’t. The power running and player support adopted by Limerick was just one of the key elements in them winning the All Ireland.

This game against Wexford is the start of what looks like a great hurling year. I am really looking forward to seeing the big teams returning to the Gaelic Grounds.

It has been too long and thankfully it has come to an end. We need to be playing the top teams and it’s an ideal arena for young players to be tested.

A win next Sunday will put the wagon back on the road. It would be the ideal way to be welcoming Tipperary the following week.

These are big games, games that will be very close to championship pace. The thing about the new format is that once it starts you needs players with good engines to keep going till August. Limerick had that last year.

Winning back to back titles will be very difficult but it’s there for Limerick and we all dearly hope that they bring us as much joy as they did last year.