All you need to know about Munster versus Exeter Chiefs 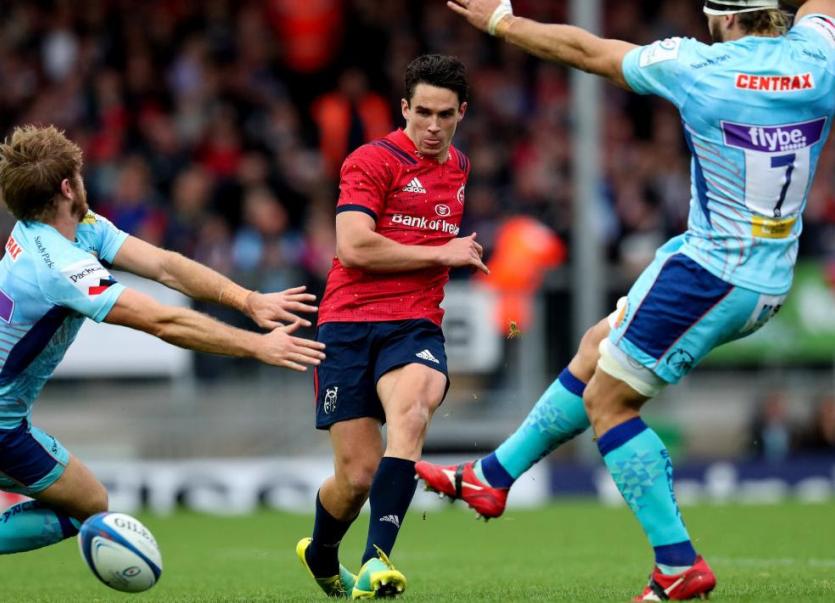 Joey Carbery in action against Exeter in Round One

• This will be the second meeting between Munster and the Exeter Chiefs, following the 10-10 draw at Sandy Park in Round 1.

• A win for Munster will guarantee them a place in the quarter-finals for the 18the time, however, if Exeter upset the odds and finish the pool level on match points with the 2006 and 2008 champions, then they will advance to the knockout stage on the basis of the head-to-head matches between the clubs.

• Munster have won their last 11 home games in the tournament - Leicester Tigers’ 31-19 success in December 2015 was the last defeat at Thomond Park.

• Exeter have lost all three of their games in Europe’s top flight in Ireland, against Leinster twice and Ulster once.

• Exeter have won their last two Heineken Champions Cup games, but have never won three on the bounce in the tournament.

• Exeter have averaged more time in possession than any other side in the competition to date this season (21m 50s).

• Tadhg Beirne (11) has won the most turnovers this season (level with Thomas Young of Wasps).

• Joey Carbery is the top points scorer this season with 59 points from three tries, 10 conversions and eight penalties.

• Only Cheslin Kolbe (39) of Toulouse has beaten more defenders than the Exeter Chiefs duo of Santiago Cordero (34) and Jack Nowell (23).