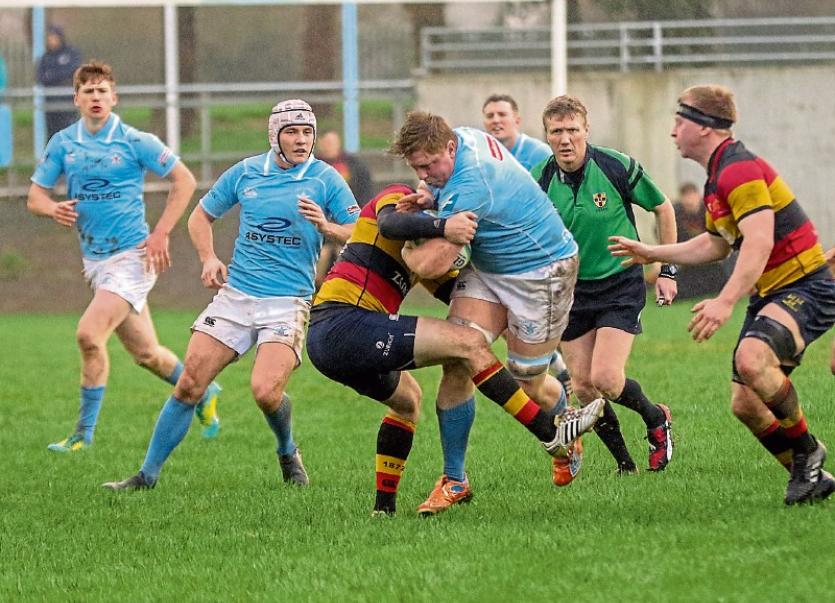 THE All-Ireland League resumes this week after a five-week break with two big Limerick derbies in Division 2 on Friday night topping the bill of fare.

When the sides met in their most recent All-Ireland League outing in December, UL-Bohs secured a hard fought 13-10 win over seventh-placed Crescent.

When the sides met out at Kilballyowen Park in mid-December third-placed Bruff recorded an impressive 24-7 win over their ninth-placed rivals.

The AIL action continues on Saturday with three crucial games in 1A for local sides. Fourth-placed Garryowen host UCC at Dooradoyle, 2pm, while Shannon, who sit in seventh, make the trip to Belfield to face UCD, who they defeated 9-8 in their previous outing.

Garryowen are seeking to win their fifth successive All-Ireland League fixture on the bounce this weekend. The ‘Light Blues’ won their previous four fixtures by a combined number of 10 points displaying their ability to win tight games.

Unlike many of their AIL rivals, Garryowen have had a busy schedule over the Christmas and New Year’s period, playing a Limerick Charity Cup and Munster Senior Cup final as well as a Bateman Cup semi-final.

Shannon’s narrow win over UCD last time out was a timely one as it came on the back of three defeats on the spin.

Saturday’s opponents UCD are level on points with Tom Hayes’ Parish side in the table, so the Round 10 game is a crucial fixture in Shannon’s bid to move away from the lower reaches of the Division 1A table/

Elsewhere, in Division 1A this Saturday, eighth-placed Young Munster travel to Castle Avenue to face Clontarf.

Munsters’ go into the game on the back of their clinical Limerick Charity Cup final win over Garryowen at the Markets Field over the Christmas period.

The Greenfields side is on a run of five defeats and a draw from their last six All-Ireland League fixtures.

Munsters’ suffered a frustrating 17-11 home defeat to Clontarf in their last outing in the league before Christmas.

Meanwhile,  Garryowen  will face City of Armagh in this season’s Bateman Cup final after the ‘Light Blues’ scored a nail-biting 14-12 semi-final win over All-Ireland League Division 1A rivals Lansdowne at Dooradoyle on Saturday.

A 79th minute try from hooker Liam Cronin, after a bout of patient, composed attacking play deep inside the Lansdowne ‘22, helped Garryowen edge past their Dublin rivals for the second time this season following their AIL victory in October.

The drama wasn’t over yet, however, as Garryowen had to withstand several minutes of pressure in added time as Lansdowne out-half Scott Deasy saw his drop goal attempt slide right and narrowly wide.

Garryowen’s reward for beating the holders is a Bateman Cup final meeting with AIL Division 1B high-flyers City of Armagh later in the season.