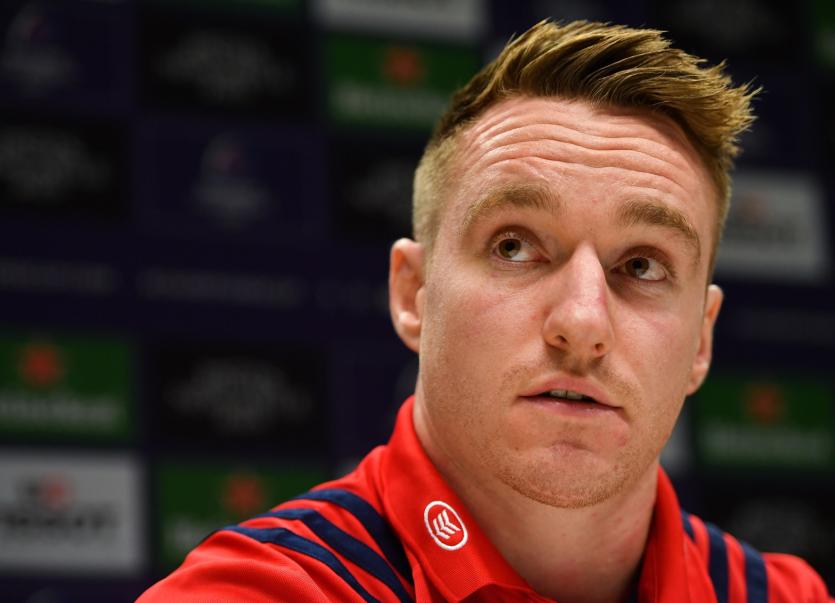 Munster's Rory Scannell talked to the media this week in UL

IT could be a very busy few weeks for Rory Scannell. First up, this Saturday evening at 5.30pm, the Cork native will be literally front and centre as Munster take on Exeter at Thomond Park.

The final Pool game of the season is another chance for Scannell to put his hand up for Ireland selection. (The squad for the Six Nations is being announced today)

"They're the games the coaches are looking at, the interpros and the big European games. I haven't really thought about the selection a whole lot, it's been a big few weeks for the club. You're just concentrating on your own performance and if you do that, and do well over these few games, you can put your hand up but you can't affect what happens after that. You can only hope you do well and if I get into the Six Nations squad, great"

Scannell is hoping his side can continue their good run of form going into the Exeter clash this weekend.

"We're delighted with the result on Friday over in Kingsholm. It was a tough game. We pulled away in the end but it was definitely a lot tougher than it looked on the scoreboard. And we had a good away win in the Sportsgrounds a week before. So we're coming into a bit of form now and it's definitely what we needed going into this weekend"

Munster's 10-10 draw in Sandy Park in Round one against Exeter is not a game remembered for the rugby on show, but more for the conditions the team had to play in. Winds bordering on hurricane intensity saw both sides struggle to get any free flowing rugby into their 80 minute shift.

"They tend to be the conditions over in Exeter a lot of the time and teams struggle there" admitted Scannell.

"They don’t lose often at home. I think we did quite well that day with our kicking game. Duncan Williams and Joey Carbery kicked the ball and put us in good positions. We kind of felt we could have nicked the game. We left a few chances out there but, saying that, at the time, to get two points over in Exeter is a tough task as well. It’s shown to be important that we hung on for that draw as well. I think the kicking game this week is going to be massively and hopefully the weather will be a bit better and we can attack a bit more as well. We’re looking forward to it"

As for Exeter, their bonus point win over Castres last weekend means that they come to Thomond Park with something to play for. Does Scannell expect more of the same from the Premiership kingpins?

"Yeah, they were very impressive at home. To have Jack Nowell back as well… I think he polayed 55-60 minutes and scored an outstanding solo try at the start of the game.  They didn’t give Castres any chance with the way they attacked. There was so much momentum in their attack and they scored some quality tries. Even at time when there as lapses in concentration, Castres broke them down once or twice but they never looked like they were going to lose that game yesterday.
here was a couple of kicks missed so the margin could have been even bigger.  We’re under no illusions as to what we’ll be facing on Saturday"