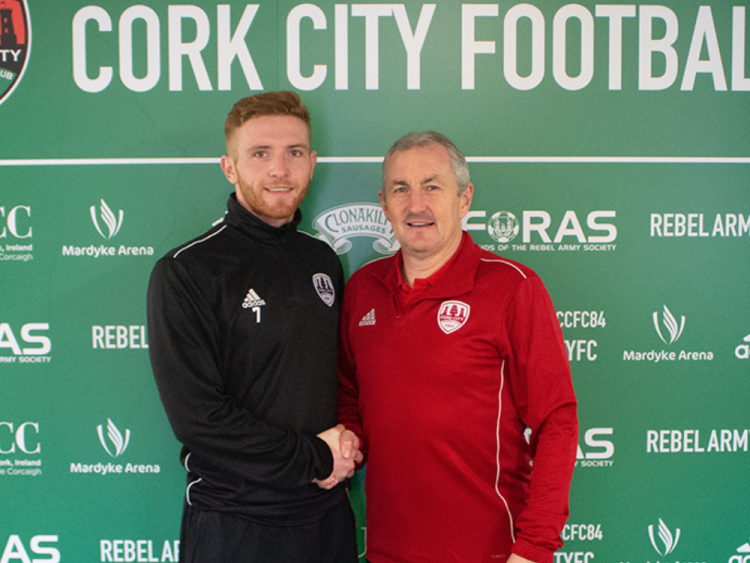 Cork City FC have this evening confirmed the signing of Darragh Rainsford from Pike Rovers.

"The 24-year-old striker joins the club after a spell with Pike Rovers, and he told CorkCityFC.ie that he was very pleased to be returning to SSE Airtricity League football: “You don’t realise how much you miss playing at this level until you get back into it. It took a couple of days to get used to the tempo and the technique of the players, but I really enjoyed training for the last few days. I am looking forward to getting fit and getting going.”

️| Darragh Rainsford has signed up for 2019! He shared his thoughts with us a little earlier...#takeyourseat #ccfc84
Listen & subscribe to our free @SoundCloud channel here:https://t.co/W75YL0foDXhttps://t.co/y9d0VNY2B3

“I’m not foolish; I don’t think I am signing and that I will be in John’s starting eleven straight away. I know I have to work my socks off, get as fit as I can and take my chances in pre-season. All going well, I hope to get into the squad an make a few appearances, and if I can do well from there, push into the team.”

“I was at Carew Park and then at Pike Rovers, and they both looked after me really well. Pike got me in the best shape I have been in for a few years, so I would like to thank them and wish them the best of luck for the rest of the season.”

City boss John Caulfield welcomed confirmation of Rainsford’s arrival, saying: “Darragh had tremendous potential as a young lad at Limerick, and I remember he came on against us a few years ago in Thomond Park. He drifted out of the league over the last couple of years, but he has come in over the last couple of weeks and done very well. He can play up front or wide, he is a very good, technical player and we have been very happy with. There are certain things he needs to work on; the step-up in intensity will be big, but he has a fantastic attitude and it is a real opportunity for him.”

“We have a number of friendly games coming up and he will feature in those. We have had a number of players come in from amateur football and do very well, and we feel that, with hard work over the next number of weeks, Darragh could do really well for us.”