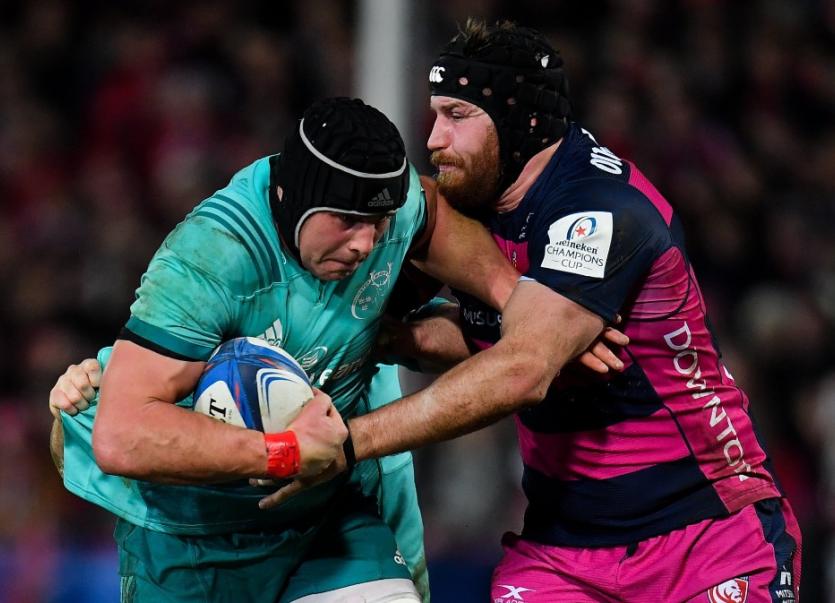 CJ Stander on one of his 18 carries this weekend

HAVING made 18 carries and 17 tackles just minutes earlier, one could expect CJ Stander to be a broken man after Munster’s win over Gloucester.

However, the ever smiling Ireland international was in great form when he was presented to the media for post match duties at Kingsholm on Friday night.

Indeed the lesson to be learned from the number 8 on Friday night, was not about winning rugby matches, it was more about being aware of where Jack Russells are.

Asked if last Friday night's win would put the ‘Munster can't win on the road’ fears to bed Stander replied:

“Yeah, the thing is, my Dad would say, ‘it’s like a Jack Russell in the dark, you never know when it comes’ so hopefully we can build on that and not that let bite us again deeper into the season. We need to build on momentum and these away performances, get the monkey off our back.”

We were confused too. So we asked again.

“A Jack Russell, it bites you in the dark but it doesn’t come from the front, it comes from the back,” Stander explained.

When asked if he had ever been bitten by one, either physically or metaphorically at this point, he replied, with a wry smile.

“No, I know not to walk in the dark when there’s a Jack Russell,” he said.

Following the cryptic message, Stander went on to praise his team mates on what was a very important win for the province.

“It (Gloucester) was a great game and they came out and in the first play put us under pressure but, you know, we wanted to come over here and get the win. We were disappointed against Castres away, it’s something we’ve worked on and next week is going to be a massive battle again and that’s why we want to play in this competition.”

All roads lead to Thomond then for next Saturday's clash with Exeter (January 19 at 5.30pm) and Stander is expecting another tight affair.

“Next weekend’s going to be massive. The last time we played them it was a draw, 10-all. It was a tough game with the wind and a lot of poor discipline from our side that we disappointed ourselves again.

“But they’re a good team and they have a lot of magic out the back. We’ve got a chance but it’s going to be a tough one and it’s not going to be easy,” admitted Stander, who was sporting a scrum cap due to an ear injury picked up against Leinster.

“I ripped my ear against Leinster so we’re just trying ease it up. It split again in training and the stitches came out,” he explained.

When asked if it is a permanent fixture, Stander added: “My wife actually likes it, so I’ll probably keep it on.”