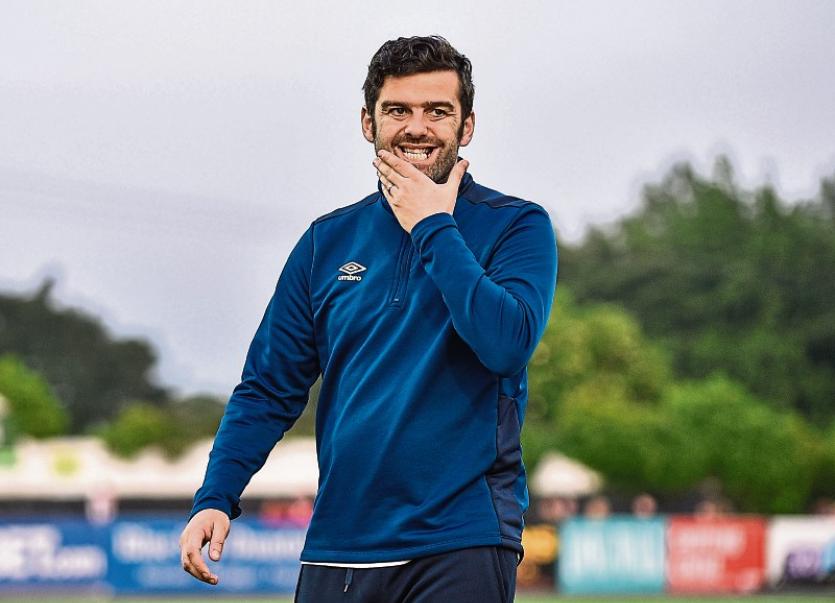 LIMERICK FC play their first pre-season friendly this weekend against the backdrop of the sudden departure of their general manager.

The Tommy Barrett managed Limerick side tackle Cork City in the first of three confirmed pre-season friendlies this Saturday at The Farm, UCC, 2pm.

However, Earley confirmed this week that he would not be continuing in the role with the Blues, after two months of takeover discussions on behalf of a US based investment company, to purchase Limerick FC which would have ‘cleared debts and secured the future of the club’ had ‘broken down irretrievably’.

Speculation has been rife over where Limerick will play their home games in 2019. However, Barrett said it is his understanding that the Blues will continue to play at the Markets Field.

While Limerick have 13 players signed for next season, up to five more players are currently training with the squad.

Manager Tommy Barrett said: “We have 13 players signed, we have a few lads in on trial. There were 18 players training this morning (Tuesday), so numbers are creeping up.

“We have a few more players to sign yet. We are training three mornings a week at Hogan Park.

“The lads we have training, the young boys, are flexible around their jobs and again it saves us money hiring a full length all-weather pitch.

“We will look at the schedule over the next few months. When the mornings get brighter we may train before and after work with the longer evenings too.

Ideally, we would like to have signed 16 or 17 players and then work off our U19 after that, but as many as we can.

“We need to have a plan and stick to it and hopefully we can do that.”

Manager Barrett said the players and coaches needed to distance themselves from the off-field speculation over potential investors looking to invest in the club and the recent departure of the general manager.

“Players just want to get on with playing. Like I said, we need to have a plan and stick to it, whether we are amateur or we have a certain budget set and we stick to it, we get the best possible local players that we can for that budget and get the best and most competitive team out.

“You have to distance yourself from all that stuff and that is all we can do. You can only work with what you have.”

Tommy Barrett is looking forward to the opportunity to play their first game of pre-season against John Caulfield’s Cork City side on Saturday.

“Saturday’s game with Cork will be great to give us a blow-out, to play against better opposition which they are obviously.

“Most of them have been blooded in the Premier Division last season. It will another match at a high level.”

Limerick FCs pre-season schedule will see the Blues take on Finn Harps at the FAIs National Training Centre on Saturday, January 19 at 5pm as well as Waterford at the RSC on Sunday, January 27 in two other confirmed pre-season friendlies.

The Blues will kick-off life back in the First Division with a home fixture against Longford Town on Friday, February 22, 7.45pm.

Limerick then travel to relegated Bray Wanderers for their second league fixture of the season on Friday, March 1, before hosting Drogheda Utd at the Markets Field on March 8.

Limerick managed to gain automatic promotion back to the Premier Division the season after their previous relegation from the top flight in 2015 with a healthy playing budget at their disposal.

However, at present, Limerick’s playing budget is significantly reduced on that 2016 level.

Meanwhile, it has been confirmed this week that former Limerick FC defender Paudie O’Connor has moved to Sky Bet English League One side Bradford City on loan until the end of the season.

Twenty one-year-old Ballybrown defender O’Connor has been playing on loan at another League One side Blackpool this season and featured in their FA Cup loss to Premier League giants Arsenal on Saturday last.

The centre half, who joined Blackpool on loan from Leeds Utd this season, has played 17 games at Blackpool, lining up at the back in the Bloomfield Road side's last four fixtures.

While with Blackpool, he also scored two goals, with one of them coming against Arsenal in the Carabao Cup in October. O'Connor told the Bradford City website that he could not wait to get going at his new club.

O'Connor said: “I am really happy to get the deal over the line and, after speaking to the manager, I can’t wait to get going.

“I enjoyed my time at Blackpool and played plenty of games, so I have picked up some great experience of League One.

“I am aware of where we are in the league table, but I am up for the fight and am confident the club will rise up the table.

“It is all about working my way into the team now. It will be a case of showing my worth in training and getting a chance. Since the new manager has come in, the results have really picked up and the boys are playing some good football.”